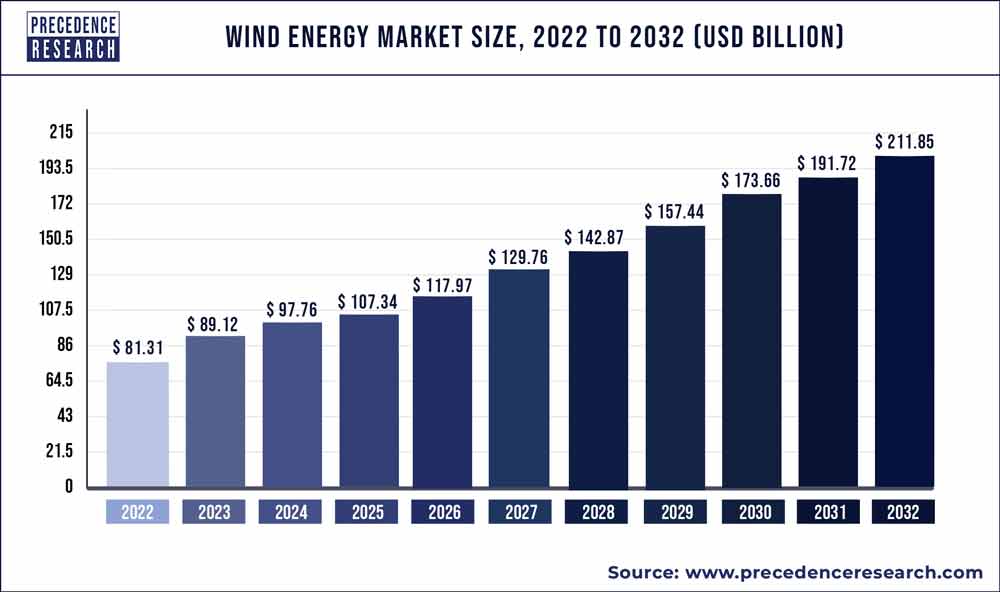 Wind energy is a kind of renewable energy. The method of using wind to generate electricity is known as wind energy. Wind turbines are used to transform the wind’s kinetic energy into the mechanical energy. The mechanical power can also be used for specific purposes such as water pumping.

Due to the implementation of rigorous environmental rules, the market will continue to move away from traditional energy sources and towards renewable energy technology. The product penetration will be influenced by increasing offshore prospects along with the development of a strong industrial and commercial sector infrastructure.

The global wind energy market is predicted to rise due to a significant increase in demand for renewable energy sources. The governments all around the world are encouraging sustainable energy sources, which, unlike traditional power sources, may cut carbon emissions. In addition, offshore wind energy turbine eliminates the constraint of sea depth, making it easier to choose the ideal location for electricity generation.

The government regulatory authorities and agencies in the developed and developing regions are concentrating on reducing reliance on traditional energy sources in order to reduce carbon emissions, which is encouraging the generation of electricity using renewable energy sources such as solar and wind. The increased need for energy in a variety of industries such as healthcare, food and beverage, and residential, has boosted the growth of the wind energy market during the forecast period.

The offshore wind farms are also becoming more popular as a source of energy among wind energy market players. Offshore wind power projects are expected to open up the growth opportunities for deep water projects, where the high speed produces a much more advantageous operating environment, driving the demand for offshore locations. The renewable energy sources have been widely supported by governments all around the globe.

The countries all over the world are concentrating their efforts on growing investment in offshore wind energy projects in order to collect energy from the environment’s natural wind resources, ultimately boosting the growth of the global wind energy market. Offshore wind power installation is a difficult undertaking since it necessitates the transportation of large and heavy equipment to the project site, raising the overall cost of the wind energy projects. However, due to technological advancements for offshore installation of wind turbines, the overall cost has decreased, making offshore wind a viable renewable energy choice.

Scope of the Wind Energy Market

Based on the location, the offshore segment dominated the global wind energy market in 2020 due to the availability of modern technology and comprehensive solutions given by various service providers, the segment is expected to develop as demand for offshore wind installation rises.

On the other hand, the onshore segment is estimated to be the most opportunistic segment during the forecast period. Due to its lower cost than offshore wind power, onshore wind power has become one of the most popular renewable energy sources across the globe. Additional elements supporting category expansion are an easy installation method and a reduction in greenhouse gases emissions.

Based on the application, the utility segment dominated the global wind energy market in 2020, in terms of revenue. The utility-scale wind turbines are that are connected to the country’s transmission infrastructure. Large scale utility-scale wind generating projects necessitates a variety of building, land, and other permissions, as well as the careful management of relationships with many market players.

Based on the region, the North America region is estimated to be the most opportunistic segment during the forecast period. The emerging markets in the U.S., provide a lucrative opportunity for wind energy market, owing to increased demand for electricity. Furthermore, the immense wind power potential, along with a decrease in the cost of the advanced technologies, is projected to present the industry with widespread commercial opportunities during the forecast period.

To minimize the overall cost of the wind energy projects, the key market players are working together and acquiring raw material and component manufacturers. Furthermore, the key market players are spending in research and development to improve the efficiency of their technologies in order to obtain a competitive advantage over their competitors and gain a larger market share over the projection period. Continuum Wind Energy Ltd, backed by Singapore-based Clean Energy Investing Ltd., an indirect wholly-owned subsidiary of Morgan Stanley fund New Haven Infrastructure Partners, announced plans to issue its first green bond in February 2021.

Some of the prominent players in the global wind energy market include: