The offshore wind energy market has a great potential to supply large amounts of clean and renewable energy to satisfy the demands of Electricity in cities along the american coastlines. There are about 40 projects in the developmental stage across the United States of America. The production of electricity to run offshore wind power is larger as compared to that on land. United Kingdom holds the maximum capacity of the total worldwide offshore wind power followed by China. The cost of installation is higher as compared to that on land but the generation of electricityis significant.

The European Commission has estimated that there will be a potential increase in the future through the offshore projects. The offshore wind market provides many economic benefits to the local communities as they generate jobs. It is a renewable energy source that does not emit any pollutants in the atmosphere also they do not consume any water. This technology will reduce the carbon footprint as it is the aim of may countries across the globe. It is the cleanest form of energy which uses advanced technology and it doesn’t disrupt or affect any farm operations. It also helps in reducing our dependence on the fossil fuels.

Depending on the size of the wind turbines it can generate a revenue upto$10000 in a year. This technology sustains the capability to become RES technology to meet the demand of the global needs. Even though COVID affected many things yet 2020 happened to be the second highest year for the installation. This technology happens to be the best as believed by many nations but the governments need to meet the commitments and work better on this industry.

The main components of the wind farms are turbines cables and substations. Based on the constructions using electrical infrastructure, substructure or turbines the offshore wind energy market has the maximum output through usage of turbines. Wind turbines are generators of electricity using wind energy to reduce the installation cost many turbines are installed at the same time in the same location. Among all the operational offshore wind farms turbines offer the best output. The turbines are located in oceans and larger lakes. To prevent corrosion cathodic protection can be used. Larger blades give better power generation but the installation is a task as the transportation and the assembly of the structure requires specialized vehicles and even though the components would be moving through the night they would still cause traffic and

Mono pile Foundations are used for a depth up to 30 meters, for waters up to 80 meters cconventional steel jacket structures are constructed. Also, tripod piled structures are used. The tripod pile structure is a more efficient denvelopment that reaches the water up to 60 meters but it involves a high construction cost and installation cost. 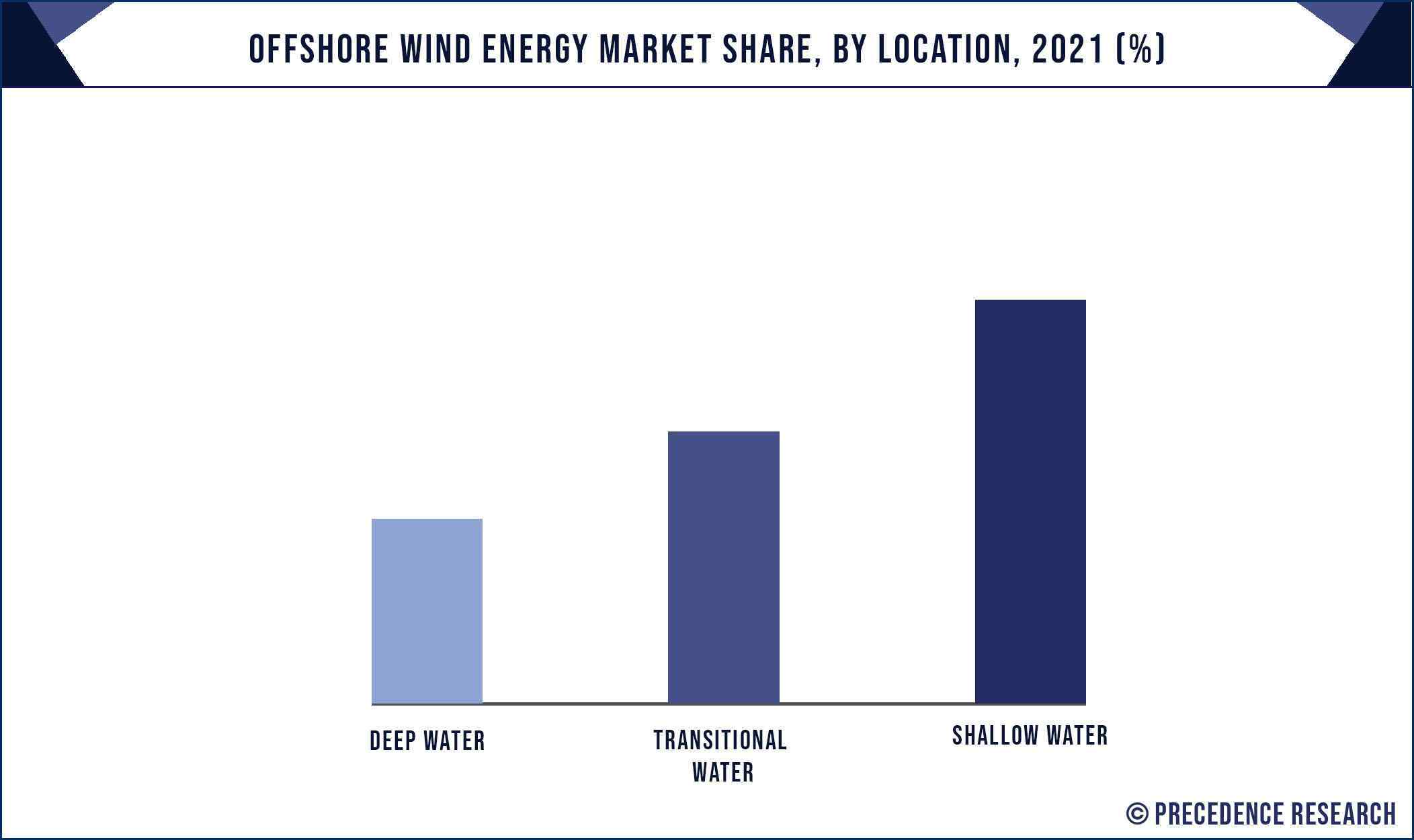 The largest contributor in the offshore wind market has been the shallow water. Number of projects is under construction in this segment. The installation of the infrastructure is easy in shallow water.

The European market is the largest market among all regions in 2021. It comprises of UK, Germany, Netherlands and the rest of the Europe. EWI (European wind initiative) which is a research and development program is concentrating on upgrading the infrastructure. To generate more power the governments are also promoting renewable energy sources. 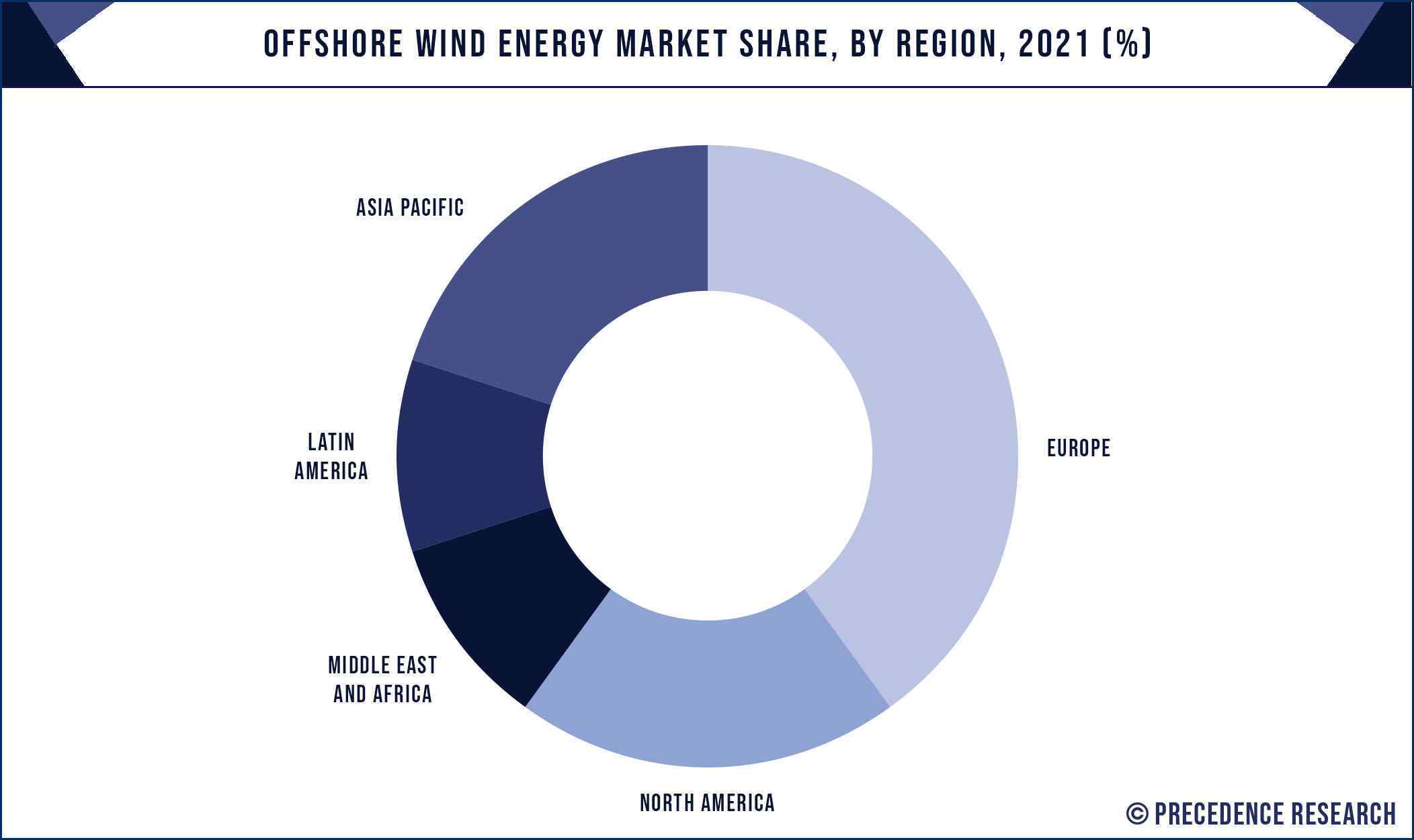 Apart from the European market the leading players for the offshore wind market are electric wind power (China), Siemens gamesa (Spain) and General Electric (US). The American offshore wind market will generate 83000 jobs by 2030 and the investments in the market will give returns of $5.5 to 14.5 billion per year by 2025 and up to $25.4billion until 2030 in terms of the economic output. US have vast stretch for energy generation. Their coastal area has the capacity to provide upto 2000GW for usage. This will draw major investments in USA companies have announced a good amount of port related investment which happens to be $307 million and $650 million in the infrastructure used for transmission. US signed a contract to develop new crew transfer vehicles which will w built by Blount Boats. The emerging markets in Africa and south America are providing a great opportunity ever increasing need for more and more electricity has made this option lucrative.

A multi turbine technology is under development by Norwegian company which will generate five times the energy as compared to the turbines that are presently used. The design is that of a square grid with about 100 small blades. All of this is supported by a floating Platform.

Recently bigger blades are installed that are double the size of the previous blades measuring up to 115 m long. It spans the average passenger airplane. The size of the blades will increase in the future years. The wind turbines and the size of the towers is also increasing. A decade ago the height was 80m and now alterations are made depending on the area where the structure is raised and the climatic conditions. Since the size of the blades is large efforts are made to device the blades in a way that they can be assembled at the site and transported in segmented pieces there is research being done on the usage of different matter for the production of blades technological innovations are made to reduce the mass of the turbines and reduce the cost. Reduction in the weight has opened more options of floating structures that are better than the old ones.

In January 2022 a plan to build 495 MW floating structure was announced by Italy which will have 33 turbines with 15MW capacity. In November 2021 UK announced an investment of US$218 million to build floating structures in Wales an Scotland. Owing to all these market trends the offshore floating structure will grow significantly in the coming years. In India NIWE will be in charge of all the offshore wind projects a target of 5MW is set for 2022 and 30GW shall be the target for the year 2030. Under the administration of Biden, a target of setting 30GW of offshore structures by 2030 is expected. Despite a slowdown in China in 2022 other nations like UK and France have helped in increasing the capacity.

It is anticipated that the American market will be the highest offshore market by 2024. Haliade-X aan offshore turbine with a capacity of 13, 14 and 15 MW is the most powerful turbine that provides 60-64% above the industry standard.