Acetic acid (CH3COOH), often referred to as ethanoic acid or methane carboxylic acid, is an organic chemical that is colorless and has a pungent, harsh, and sour smell. It is one of the most significant chemical reagents and industrial chemicals used in the manufacturing of volatile organic esters such as ethyl and butyl acetates, vinyl acetate, cellulose acetate, and metal acetates. The growing use of acetic acid in the manufacture of terephthalic acid is anticipated to support market expansion throughout the anticipated time frame. In the production of polyester resins, which are widely utilized in polyester films, PET resins, and polyester fibers, terephthalic acid plays a key role as a building component. Terephthalic acid is also used in the production of textiles including bed sheets, clothing, and curtains, as well as in home furnishings.

The market size is anticipated to increase during the assessment period due to the expanding usage of acetic acid in the production of several products, including vinyl acetate monomers (VAM) and pure terephthalate acid. Vinyl acetate monomers, which are made from acetic acid, are frequently used to make resins and polymers for textiles, paints, coatings, adhesives, films, and other end-use goods.

A clear organic liquid, acetic acid is sometimes referred to as ethanoic acid. The second most straightforward carboxylic acid, acetic acid has methyl as its functional group. It is used in the synthesis of several chemical compounds as a chemical reagent. The production of vinegar, acetic anhydride, vinegar, and vinyl acetate monomer are the main products made from acetic acid. It serves as an important industrial chemical and chemical reagent in the manufacture of synthetic fibers, textiles, and photographic film. As a result, the acetic acid market is growing due to the expansion of the textile sector.

Scope of the Acetic Acid Market

On the basis of application, the vinyl acetate monomer (VAM) segment has dominated the market in 2021. Currently, one of the most quickly expanding uses for acetic acid, which accounts for the majority of its total worldwide use, is vinyl acetate monomer (VAM), an intermediary in the manufacturing of a variety of chemical derivatives. In the composition of paints and coatings, vinyl acetate monomer is frequently used. VAM is polymerized to create polyvinyl acetate or other polymers that are crucial components in the paints industry. Acetic acid is in high demand since it is used as a crucial chemical reagent in the industrial sector. 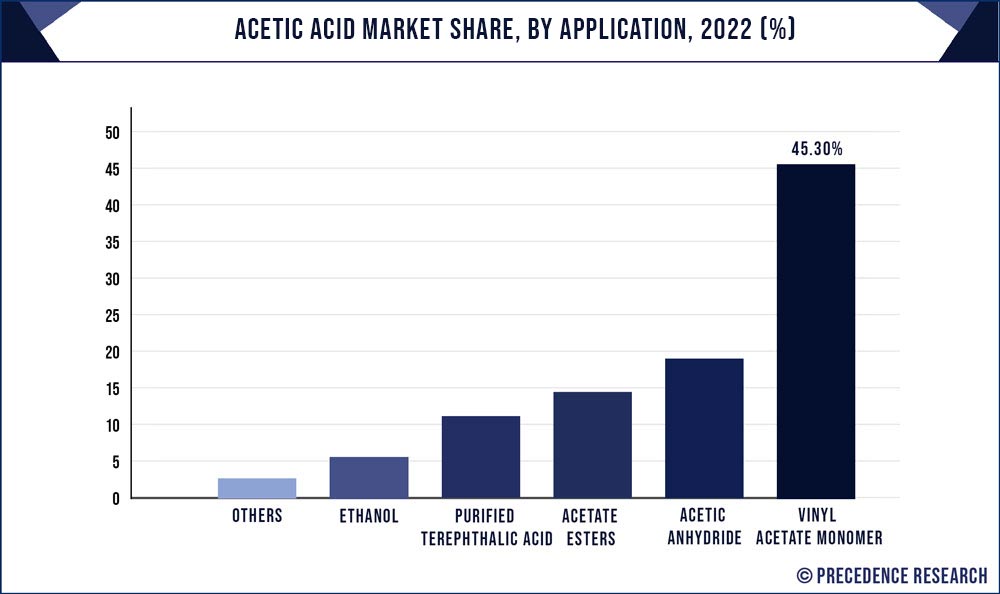 Polyester, including polyester fiber, polyester film, and polyethylene terephthalate (PET) bottles, is produced using purified terephthalic acid (PTA). Additionally, textiles and food and beverage containers employ this polyester. Coatings and other composite materials are a few examples of further PTA uses. Population growth has raised the need for food and drink, which has boosted the need for plastic bottles and containers made of polyester. The demand for this kind of acid is also quite large internationally because of this feature.

On the basis of end users, the food & beverages segment has dominated the market and it will continue to grow well in terms of revenue. Acetic acid is used to produce PET bottles, which are subsequently used to hold food and beverages. In food processing facilities, acetic acid is frequently used as cleaning and disinfecting agents. Acetic acid is the main component of vinegar, a popular culinary ingredient used in sauces and the pickling of vegetables. As a consequence of advancements in the food and beverage industry, the acetic acid market is growing.

The market for acetic acid worldwide that is increasing with the significant rate is paints and coating segment. When VAM is polymerized to create polyvinyl acetate or other vital components of the paints industry, paint and coating compositions require a significant amount of the vinyl acetate monomer that is created.

On the basis of geography, Asia-Pacific has accounted for the majority revenue share in the market throughout the projection period. Numerous end-use sectors like textile, food and beverage, agricultural, home cleaning goods, polymers, and paints and coatings are primarily responsible for this increase. The region's industrial expansion has also been aided by a rise in urbanization and disposable income in the area. Acetic acid is widely used to make vinegar, vinyl acetate, and metal acetates, which are then employed in a variety of end-use industries. Additionally, Asia-Pacific is one of the key areas for producing plastic, which offers significant chances for regional businesses to flourish. China produced 32% of the plastic used in the globe, according to Plastic Europe. Consequently, the region's strong expansion in a number of end-use sectors is also driving the rise of acetic acid market.

Up to 2030, the North American market might see positive growth. Ethanoic acid is being used more often in a variety of applications as a result of the expansion of the chemical industry and increased demand from end-use industries including the textile and construction sectors. The ethanoic acid market has expanded as a result of rising investments and expanding production facilities from big businesses like Celanese and BP Plc. Additionally, a rise in consumer spending and disposable income is driving the expansion of the textile and construction industries. Due to the U.S. dominating the fashion sector, the pace of chemical consumption is supported by an increase in the textile industry. There will likely be a considerable increase in North America as a result of these causes.