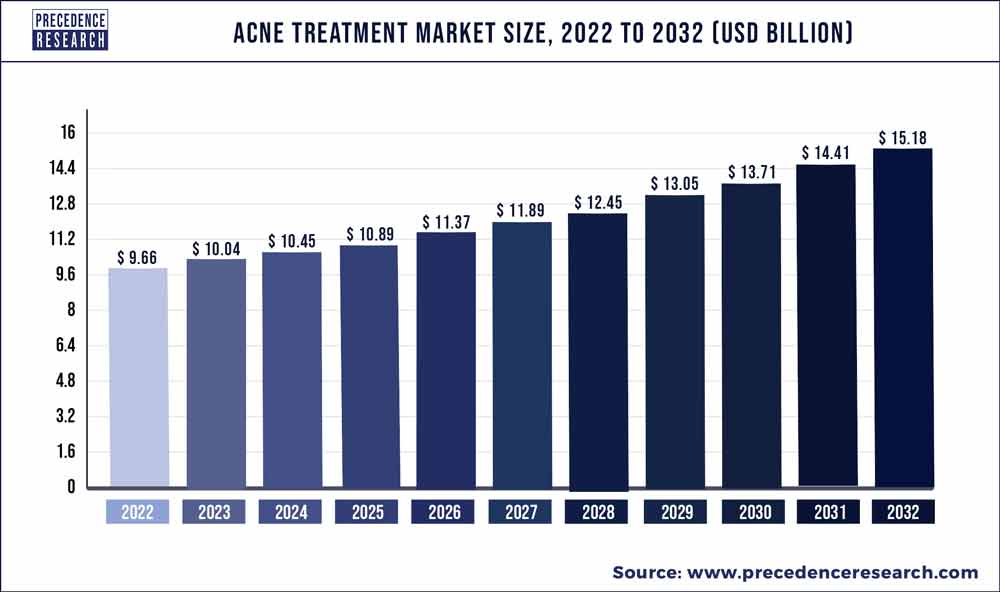 Acne is a skin related disorder which arises as a result of clogged skin pores and openings which also include the hair follicles. This order is mainly observed among the teenagers and the people belonging to their early adulthood. This is a very common skin disorder which effects any and every skin type respective of the age of the individual. This kind of skin disorder is treated with the help of antibiotics and retinoids. Though the treatment for such skin disorders does not Gary guarantee the expected results it has dominated the market over a long period of time as a result of its aesthetic importance. The use of antibiotics has been commonly seen as a mode of treatment in order to deal with the eruptions. This can disorder has a huge variety of expression which needs to be identified and diagnosed correctly in order to treat it with the required medicines and produce the desired results. The severe cases of acne usually require special treatments which include the use of chemical peels and scrubs which have a deeper effect on the surface of the skin in order to bring about a considerable change. With the increasing awareness regarding health, the use of chemically formulated medicines has been avoided by the people in order to protect themselves from the probable side effects caused during the future. This has proved to be a major setback for the market which has hampered the market growth.

The occurrence of the covid pandemic had a significant impact on the growth of the market. The demand for acne treatment had faced a severe declining phase due to the lack in demand. In order to deal with the pandemic, the disposable income of the people was blocked which hampered the growth of the acne treatment market. The constant lockdowns and restricted movement which was imposed by the government reduced the amount of pollution in the environment. As a result, the atmosphere became very feasible for the skin. The number of people suffering with acne declined gradually. The increasing awareness among the people regarding health issues also encouraged them to consume a healthy diet and follow healthy lifestyle which benefited them in every way. This hampered the acne treatment market to a great extent. On the other hand, the increasing sedentary lifestyle of the people hampered the food habits which led to an increase in the number of skin disorders observed in the society. Hence, the market for acne treatment gained momentum. The trend of work from home granted ample time to the working class to take care of their personal health which benefited them tremendously. As a result of the healthy lifestyle which was practiced during the lockdown reduce the number of skin complaints among the people. The various home remedies that were practiced also reduced the patients for the acne treatment market to a great extent.

Acne is a result of the unbalanced amount of oil secreted by the skin which settles in the open pores and clogs them to form a minor eruption that gradually forms into a major one. Rapidly increasing modernization and urbanization has made people extremely busy in their work and hence increased the amount of stress. Stressful lifestyle hampers the hormonal balance of the body which directly impacts the various secretion processes that take place. This has a direct impact on the amount of oil secreted by the skin which leads to the formation of a minor eruption which is known as an acne. The flexible working schedule that is practiced by the international companies hampers the lifestyle of the people. An improper lifestyle has a direct impact on the quality and texture of the skin.

The improper food habits of the people in which a major portion includes the consumption of fast food, fried food and stale food items hampers the quality of the skin tremendously. With the increasing research and development which is carried out by the key market players a number of advanced applications have been recently introduced into the market in order to obtain the desired results. The increasing number of approvals which are granted to the medicines by the drug department has boosted the growth of the market tremendously.

A number of skin care products have been launched by the key market players to provide the best possible results within a stipulated time slot. Various software’s have been launched that help to make a correct diagnosis of the skin conditions which help to differentiate between the various types of acne. The use of artificial intelligence has been seen in the health care sector to provide better results to the patients. The use of technologically advanced devices to treat acne has propelled the market to a great extent. The growing importance of physical appearance has made people very conscious regarding the eruptions and marks on their skin. It has started having a direct relation to the confidence presented by the individual.

On the basis of product type, the retinoid has shown a tremendous demand in the market as a result of its rapid demand. The use of retinoid has become a very common practice among the people in order to pull out the excessive oil secretions and dust which is clogged in the open pores of the skin. This process is considered to be safe and as the least number of side effects which makes it a leading market segment. 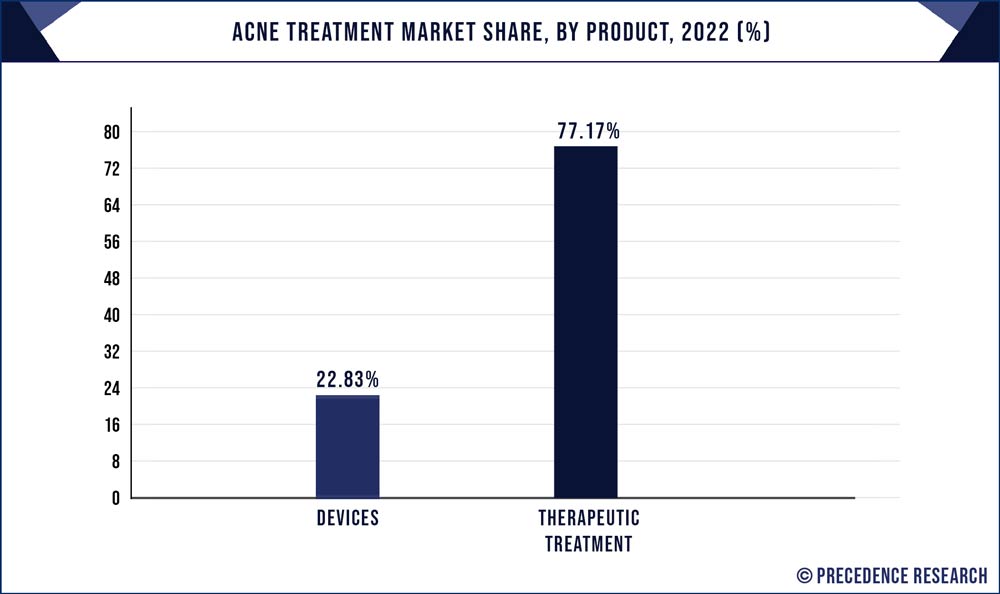 The use of creams and ointments has shown a very quick growth in the market as a result of the advanced chemical compositions launched by the key market players. The use of lotions and toners find their place at a considerable position as a result of the visible changes produced by them. Cleansers are used on a daily basis by the consumers as a result of the increasing pollution in the environment.

On the basis of gender, women have dominated the segment as a result of the high demand of aesthetic appearance. The skin of women is very sensitive and prone to external impressions which makes it an easy target for various skin disorders. The various beautifying procedures that are performed on the skin in order to obtain a clear and glowing appearance also hampers the original quality of the skin. This proves to be a driving force for the acne treatment market.

The various hair removal procedures which are performed on the skin leads to multiple open pores which have a greater chance of getting clogged with oil secretions and pollution, resulting into the formation of an acne. This forms another factor for the growth of the market. Men on the other hand, prove to be a major segment as a result of the lack of cosmetic procedures available. This results in the appearance of multiple eruptions on the skin leading to complex forms of acne.

On the basis of end user, the market has been dominated by the Medspas which finds the largest client base when acne and other eruptions on the skin are concerned. The Medspas provide various special treatments and services such as the application of chemical peels and scrubs which help to remove the acne and acne scars instantly. This segment also has a major impact on the market as a result of the availability of a qualified medical practitioner under whose supervision the treatment is carried out. Dermatology clinics form the next largest segment which deals with these skin problems. The use of creams and lotions is done extensively as per the skin conditions in order to achieve the desired results.

On the basis of geography, the Asia Pacific region has proved to be the largest market for acne treatment as a result of the high aesthetic importance which is given to the appearance of skin. This region proves to be the largest consumer of various cosmetic products that are produced in order to obtain a clear skin. As a result of the climatic conditions hyperpigmentation has also been considered as a major problem in this region. The use of creams and lotions in order to deal with these can problems has helped to boost the acne treatment market to operate extent. The other reasons which have contributed considerable to the acne treatment market include China and South Korea who also make use of the cosmetic products on a large scale.

The North America region has also made significant contributions as a result of the huge number of people suffering with acne which is considered to be a common disorder.

In January 2022 - GALDERMA disclosed the approval it received from the authorities of the United States. It had completed the charges of ALASTIN Skincare regarding development of clinically tested products which were innovated and were dispensed by physicians themselves.

In June 2020 - Bausch health co. introduced ARAZLO lotion for the patients above the age of nine who had an eruption on the skin which fell under the heading of acne vulgaris. This took place in the United States.

In March 2020 - COSMEDIX, which is a leading manufacturer in the market of skincare products, disclosed a new product that possessed the capacity to relieve acne rapidly.