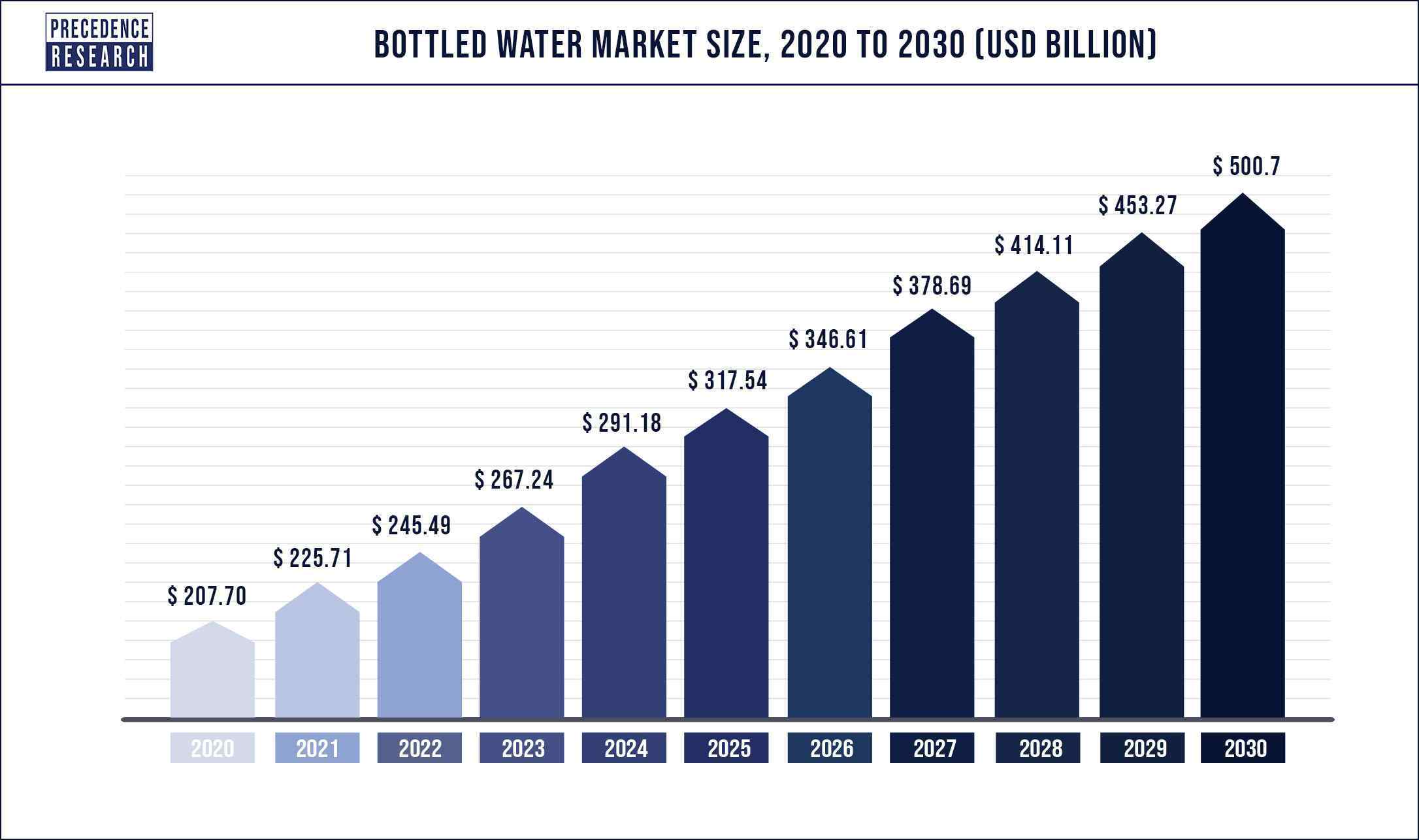 The scarcity of drinkable water in certain parts of the globe is a primary driver of the global bottled water market. Drinking contaminated water gives rise to various health risks such as gastrointestinal problems, reproductive problems, and neurological disorders. The rising awareness among the population about the ill effects of contaminated water is driving the demand for the bottled water across the globe. The easy availability of bottled water in various retail outlets such as groceries, supermarkets, and convenience stores has had played an exponential role in the rapid growth of the bottled water industry around the global markets. Furthermore, the introduction and availability of various types of bottled water products such as mineral water, sparkling water, and distilled water has gained traction in the past few decades, thereby fostering the market growth.

The growing urban population, rising disposable income, growing health consciousness among the consumers, and increasing awareness regarding waterborne diseases have fueled the demand for the bottled water among the health conscious consumers. Further, growing concerns regarding the plastic wastes from the bottled water industry have encouraged the manufacturers to increasing adopt the PET and plant-based water bottles to achieve sustainability. These eco-friendly bottles are expected to drive the demand for the bottled water in the developed economies like Europe and North America. The innovative packaging is expected to play a crucial role in the growth of the market in the foreseeable future. The adoption of sustainable materials in making bottles is very helpful in creating a positive brand image among the consumers.

By product, the purified segment led the market with considerable revenue share in 2020 and is anticipated to retain its dominance throughout the forecast period. This is attributed to the presence of desalination facilities across the globe that serves the need for the purified water. According to the United Nations, there are around 16,000 desalination facilities in across 177 nations of the world that provides purified water. The rapid growth in the population, increasing disposable income, increasing per capita water consumption, and improvement in the standard of living are the various important factors that boosted the growth of the purified water segment across the globe. 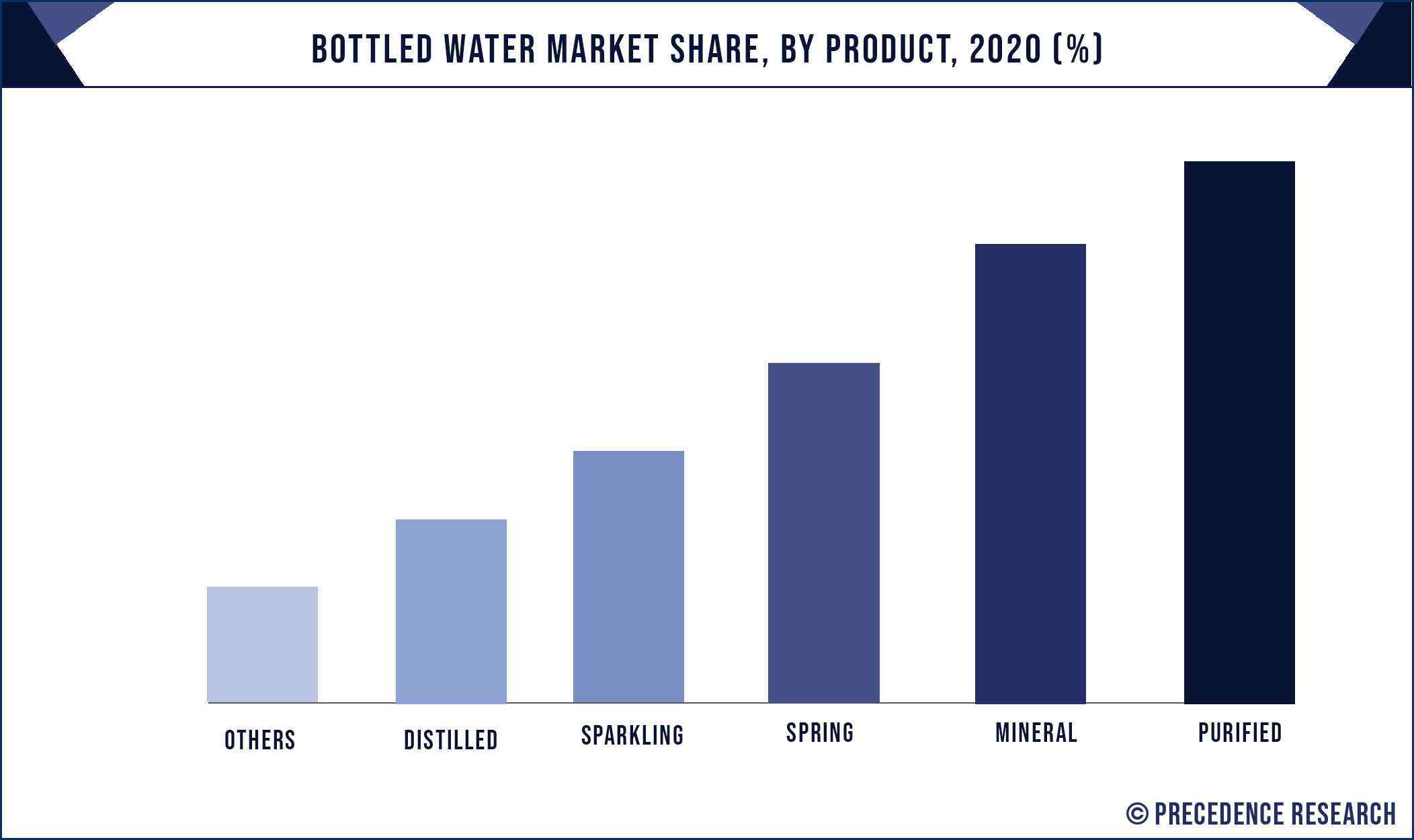 By distribution channel, the supermarkets &hypermarkets segment led the market with notable revenue share in 2020 and is anticipated to retain its dominance throughout the forecast period. The supermarkets & hypermarkets provide a very wide range of consumer goods and food and beverages products along with convenience and huge discounts. It operates in convenient timings and is available in easy accessible areas. It attracts huge customer base and offers consistent revenue to the market players.

On the other hand, the others segment is estimated to be the fastest growing segment owing to the growing popularity of e-commerce and online food delivery apps across the globe. The rising penetration of internet and rapidly growing users of internet is expected to boost the growth of the e-commerce channels during the forecast period, thereby boosting the growth of this segment.

Based on the region, in terms of revenue, the Asia Pacific dominated the global bottled water market in 2020 is estimated to sustain its dominance during the forecast period. It accounted for more than 40% of the market share in 2020. This is mainly due to the increasing demand for the bottled water owing to the lack of drinkable water, rising health consciousness, growing awareness regarding waterborne health diseases, rising disposable income, rapid urbanization, growing penetration of food service industry, and improvement in living standards. Moreover, the rapidly developing organized retail sector and growing demand for functional water is significantly contributing towards the development of the bottled water market in the region. 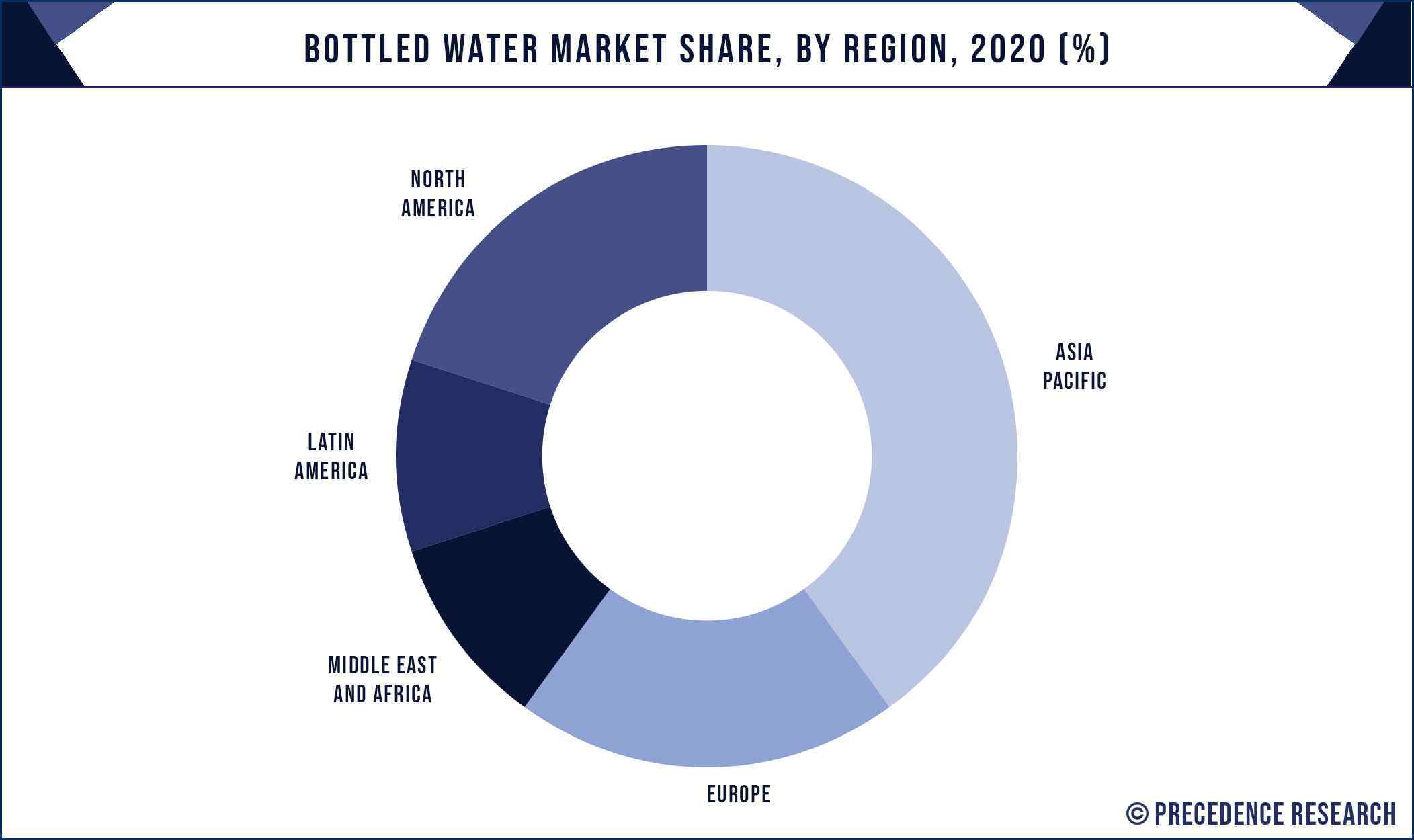 Asia Pacific is also estimated to be the fastest-growing region during the forecast period. This is owing to the presence of huge youth population that demands quality food and beverage items owing to increased health consciousness.

The market is moderately fragmented with the presence of several local companies. These market players are striving to gain higher market share by adopting strategies, such as investments, partnerships, and acquisitions & mergers. Companies are also spending on the development of improvedproducts. Moreover, they are also focusing on maintaining competitive pricing.

In February 2020, Agthia Group launched a plant-based bottle as a step towards the sustainable and eco-friendly bottle solution.

In September 2020, Danone partnered with PepsiCo, for the distribution of Danone Water’s brand “Evian” in Canada.

Some of the prominent players in the bottled water market include: