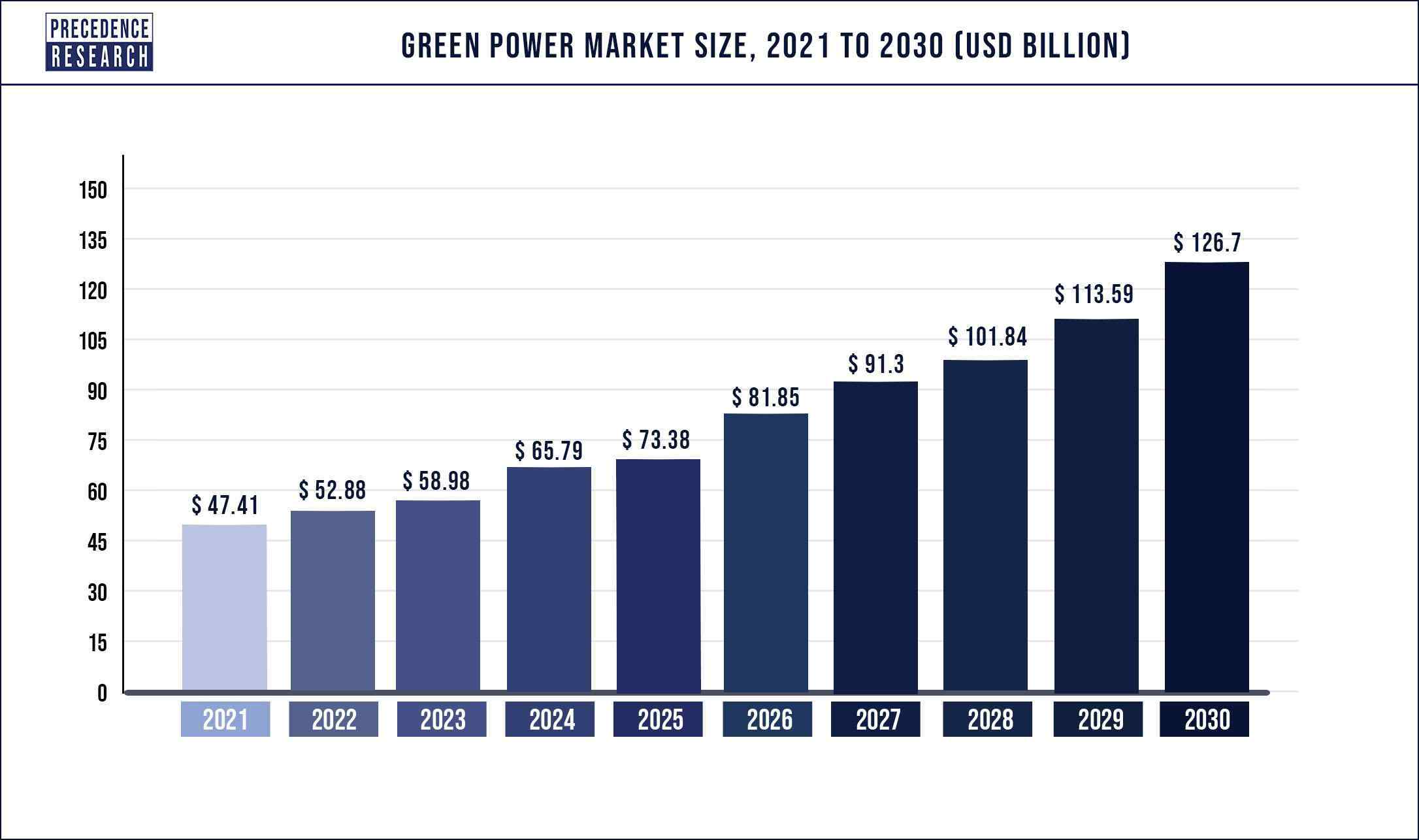 When electricity is produced with the help of solar, wind, geothermal, bio gas, eligible biomass or hydroelectric sources it is called as green power. Green power is important as it replaces the fossil fuels with environment friendly alternatives that help in reducing the negative effects. The energy produced can be called green which does not cause pollution and not all the sources of renewable energy are green. Green resources help in avoiding the drilling and mining operations that damage the ecosystem. The most common forms of green power are solar power, wind power, hydropower, geothermal energy, biomass, and biofuels. If the entire lifecycle of the green energy sources is taken into account, they release a very less amount of greenhouse gases as compared to the fossil fuels. The sources of green power can naturally replenish themselves compared to natural gas or coal, which takes millions of years to replenish.

The Covid-19 pandemic has changed the world in many ways. It is compelled everyone to think about the environment. Just like all the other industries, the global green power market has also been indirectly affected by the pandemic. There was a positive effect on the global green power market due to the pandemic. Many nations are deciding to come together and protect the earth.

Green power represents a low-cost solution for the energy needs across the world. The accessibility of green energy and low cost makes it a better option for developing nations. Depending upon the region's geography, green energy has the capacity to replace the fossil fuels in the future. The green energy is a clean source of energy. It is not just good for the planet but it is also good for the health of the people and animals as they have clean air for breathing. Green power is a stable energy power which may not have a lot of price fluctuations due to the geopolitical crisis or any supply chain disruptions. In order to meet the target of net zero emissions, many jobs are created worldwide in this sector.

As the energy produced by the green sources is locally produced and it does not involve any centralized source so it happens to be more flexible. By bringing together various green energy sources and with advancements that are being made with regards to production and development of these resources, the needs of the future generations could be met by green sources and one could believe that the fossil fuels could be replaced. Green power is a zero carbon footprint option which is environment and future friendly.

The green power market can be divided into wind power, hydropower, bio energy, geothermal energy and solar energy. During the forecast period, the hydropower segment is expected to dominate the green power market. In the process of generating electricity, with the help of the hydropower the fast running water, the falling water is used. Followed by the hydropower segment, the solar Energy segment is also expected to grow during the forecast. These projects are expected to grow rapidly due to the efficiency that it provides. Solar modules are cost effective and they are growing rapidly.

The transport segment is expected to grow during the forecast. There are installations of many renewable energy sources due to the various government initiatives across the world. But I put industrialization and organization is a key driver for this market.

Residential, commercial, industrial and utility are the end user segments of the green power market. The Utility segment provides higher share in the market due to growing per capita income. Growing concerns for climatic change, rising population, better connectivity and due to growing urbanization, the utility segment is expected to grow during the forecast. 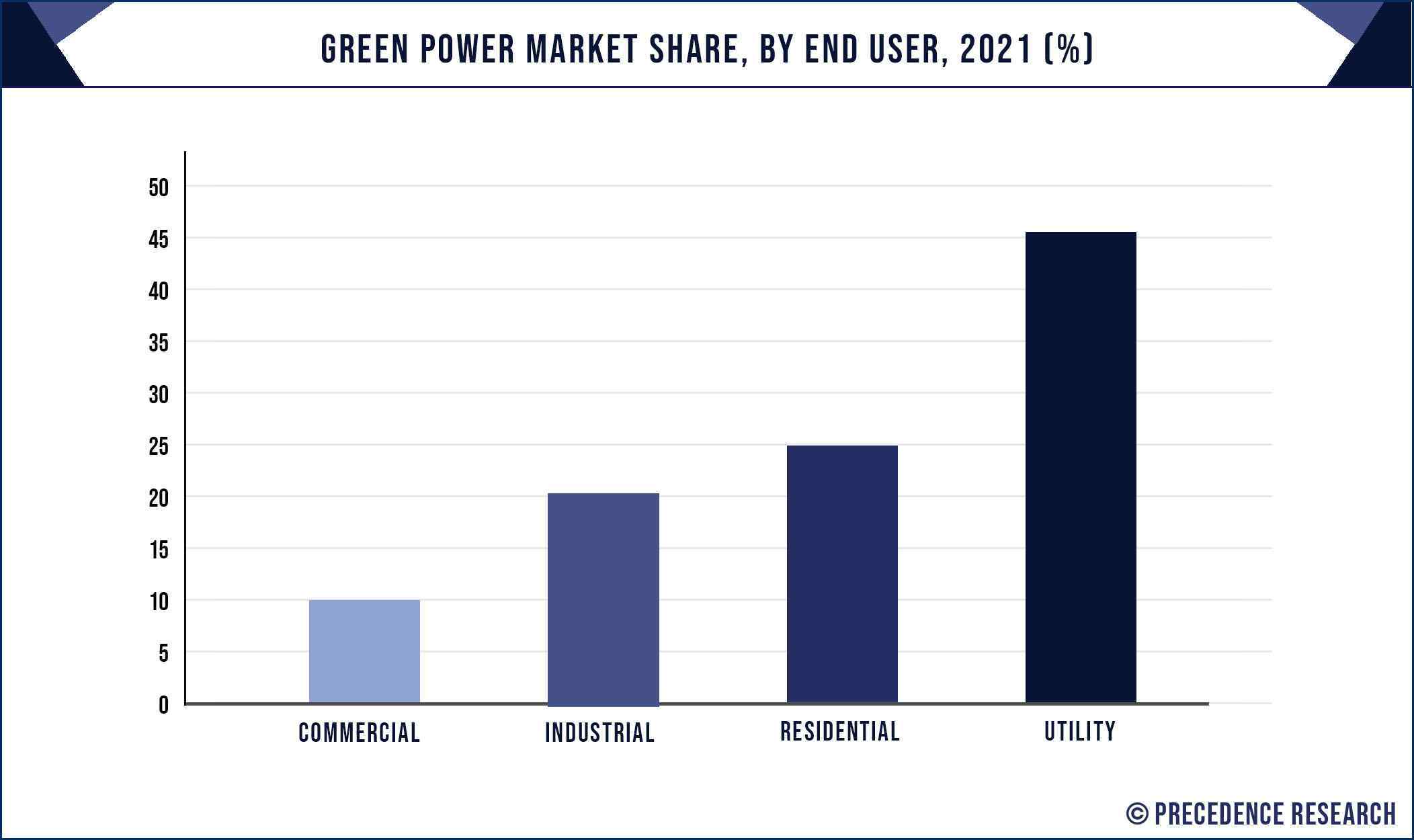 Various governments across the globe are having stringent policies for prohibiting the emission of the green house gases. As there is a growing awareness amongst the people about the use of environment friendly sources of energy like the wind, solar and others. The market is expected to grow as an inclination towards the electric vehicles in the Asia Pacific region.

The global clean power market has seen the maximum growth in North American region in the previous years. In order to curb the carbon emissions, various companies are shifting to green energy sources. The Asia Pacific Green Power market is expected to grow the fastest in the upcoming year. The stringent policies by government and various initiatives adopted by the Government of supporting the increase of green power solutions across Asia Pacific nations.

In order to build the Cerro Dominador solar thermal plant, which is owned by EIG Global Energy Partners, Abengoa and Acciona formed an association in 2020.

In 2021, Amazon announced its first investment in Canada, which is a corporate purchaser of renewable energy in the world. Greengate Power Corp of Calgary has set a new solar project in newell county, and Amazon will acquire electricity from this solar project.

There are few startups that are converting the salinity gradient which is formed due to the osmotic pressure difference between River water and seawater into usable energy.

BEfC, which is a French startup that generates electricity with the use of the paper based bio fuel cell system. It combines microfluidics, carbon electrodes and enzymes. This technology is suitable for the use in sensor data collection and transmission. It is a sustainable and non toxicform of energy. For power generation through solar energy, many companies are finding various ways to engineer photovoltaic panels using different refracting and reflecting materials. In order to concentrate light into the solar cells, which will help in the efficient harvesting of energy? In a project led by the Baltic Sea Action Group in 2022, the sewage waste discharged from the cargo ships will be converted into bio gas fuel in order to transport the ship. In the year 2022, various nations are looking into projects that aim at new methods for converting biological matter into electrical energy. In order to power the production site in Phnom Penh, Cambodia. Brewer Heineken has announced its plans to produce electricity with waste rice husks produced by the local farmers.

Some of the prominent players in the market are