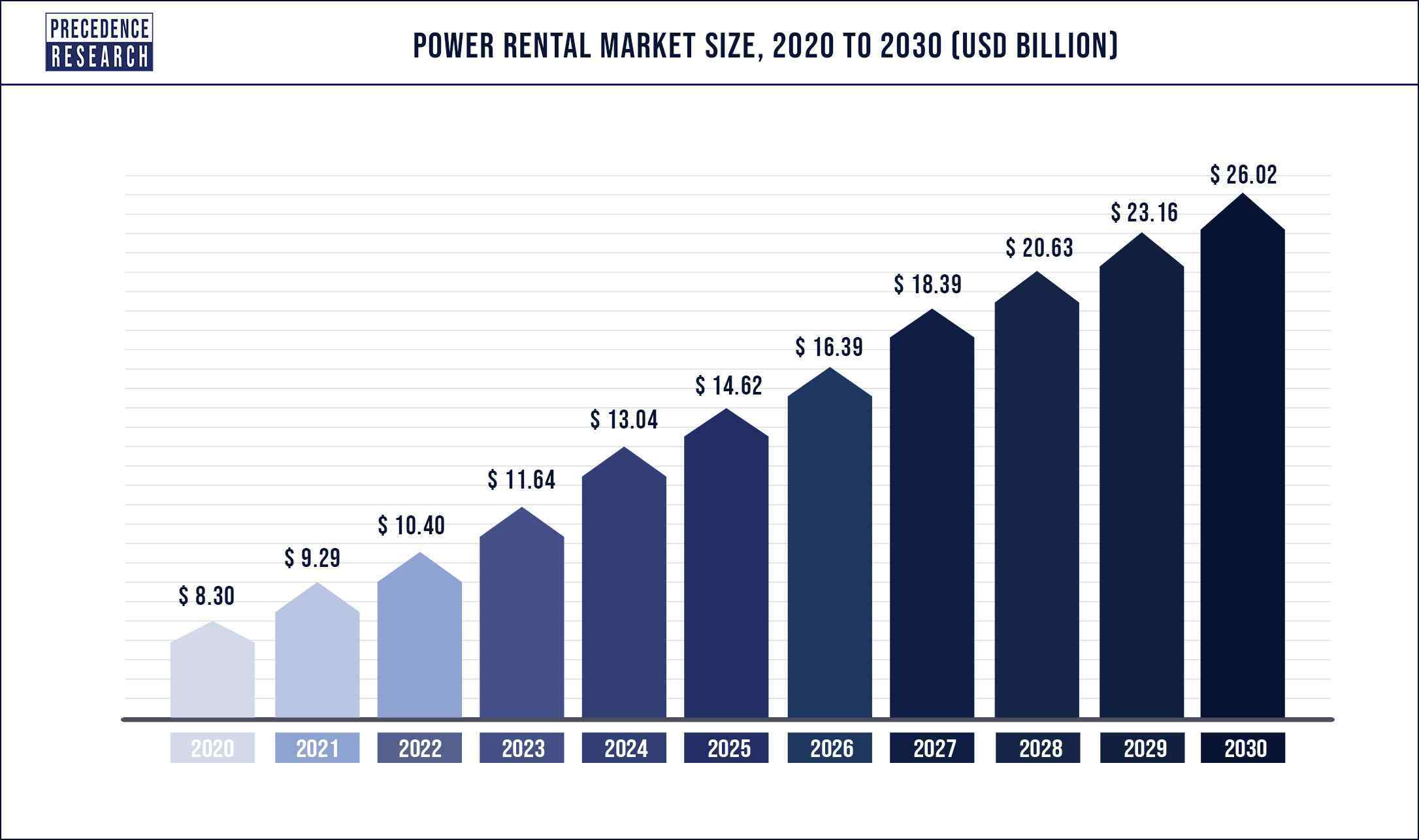 The power rental is a renting of generator, whether they operate on diesel or gas. It provides fully functional power equipment as well as a variety of components for use in power plants. Furthermore, it provides organizations with flexibility, speed, and cost-effectiveness while dealing with power outages. The purpose of rental power services is to help stabilize utility power networks while also providing additional energy to industry and communities. As a result, it has a wide range of applications in the mining, building and construction, oil and gas industries.

In the event of a power outage, the use of power leasing equipment is predicted to expand, propelling the global power rental market growth. During periods of power outage, power rental systems meet the needs of a wide range of industries by providing backup power to keep operations running. The factors fueling the demand for continuous power supply in the gas and oil and mining industries, as well as the growing need for electrification and rural power delivery. The grid stabilization is required due to ageing electricity infrastructure.

The mining industry is major use of rental power. Due to mining sites are not connected to the grid, they rely on generator sets that have been hired on a temporary basis. The rental generators are in modest demand in manufacturing businesses when the existing power supply system, such as purchased generator sets, has to be maintained, or when there is a need for extra power during peak load demand, or when there is a brief outage. As a result, sectors with poor grid power supplies are heavily reliant on the power rental market’s expansion.

Most firms prefer to rent rather than buy a new generator to save money. Furthermore, projects from diverse sectors range from one site to the next and are spread across different regions. Rather of hauling one’s generator between locations, renting for different locations appears to be more convenient and cost-effective. The high cost of purchasing new generators, as well as huge growth in numerous industries such as construction, oil and gas are driving the power rental market. However, the power rental market growth is likely to be constrained by the expansion of power distribution networks and the increased development of renewable energy projects.

Scope of the Power Rental Market

On the other hand, the peak load is estimated to be the most opportunistic segment during the forecast period. This is attributed to the constantly changing infrastructures in several verticals, particularly to promote tourism activities, which require 24/7 power access.

Based on the fuel, the diesel segment accounted 81% revenue share in 2020. The key market players in the oil and gas, mining, and other manufacturing industries all favor the growth of the segment. The increasing demand for diesel generators sets to supply temporary power requirements is due to the adequate availability and low cost of diesel fuel. 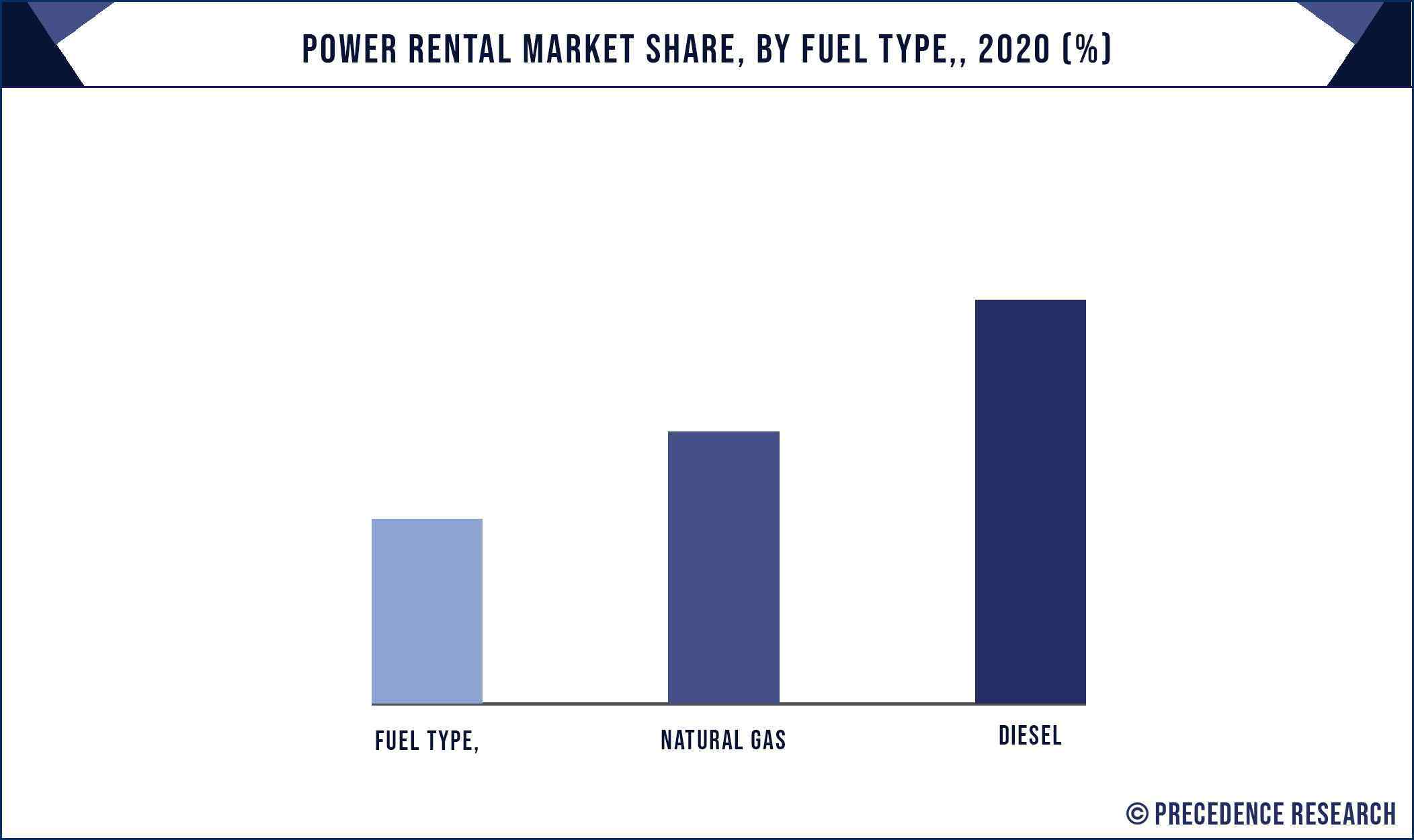 The gas segment is estimated to be the most opportunistic segment during the forecast period. Due to increasingly severe regulations and environmental policies in various locations, the market potential of gas generators is likely to expand moderately over the forecast period.

Based on the end user, the mining segment dominated the global power rental market in 2020, in terms of revenue. The mining industry is quickly expanding around the world as a result of increased production and export of various minerals and metals to support the manufacturing of various goods.

On the other hand, the construction is estimated to be the most opportunistic segment during the forecast period. The rental power is preferred by construction industry players in order to save generator installation and transportation costs. The commercial spaces, residential buildings, and roadways are examples of construction projects.

Based on the region, the North America segment dominated the global power rental market in 2020, in terms of revenue and is estimated to sustain its dominance during the forecast period. The rapid expansion of commercial venues such as hotels, malls, and retail stores has led to a significant increase in the demand for reliable power, resulting in higher power rental consumption.

On the other hand, the Asia-Pacific is estimated to be the most opportunistic segment during the forecast period. The countries such as Thailand and Indonesia are seeing massive commercial infrastructure development. Furthermore, growing digitalization, combined with the prevailing industrial revolution 4.0 across the region, would provide a significant boost to the industry’s growth.

The increased research and development spending, as well as technological collaborations between major market players, will boost the market potential. In order to maintain their market position, the manufacturers are implementing initiatives such as mergers, partnerships, expansions, and acquisitions. Aggreko, for example, was given a contract in December 2018 to provide rental power services for the 2020 Tokyo Paralympic and Olympic games.

Some of the prominent players in the global power rental market include: