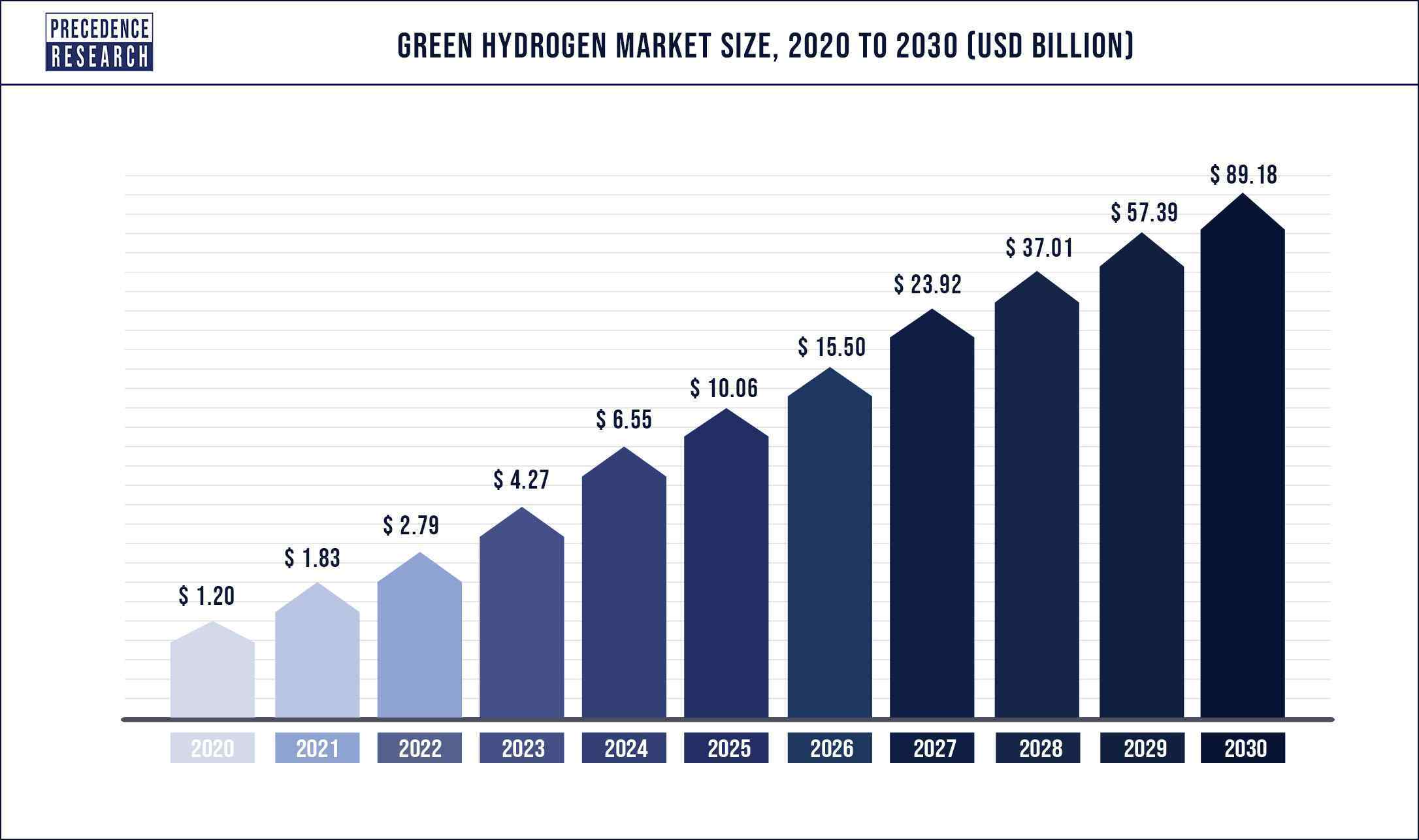 Green hydrogen is hydrogen produced entirely from renewable sources. Green hydrogen emits much less CO2 than grey hydrogen, which is made by steam reforming natural gas and accounts for 95% of the market.

The green electricity or power can be converted into a transportation fuel or used as a feedstock in industrial operations using green hydrogen as a link between them. Green hydrogen and derived fuels, such as green ammonia, will allow market players to integrate wind energy into a container ship’s fuel tank. As a result, hydrogen has the potential to considerably increase the decarbonization potential of renewable energy sources.

Hydrogen produced from renewable sources can be transformed into heat or electricity and used in a variety of ways for residential energy and electricity supply. As a result, in the case of weather-related power fluctuations, renewable energies will always be available in sufficient amount.

At the moment, fossil fuels account for 96% of hydrogen production. The traditional mode of production emits climate-disrupting carbon dioxide into the atmosphere. On the other hand, water is electrolyzed into hydrogen and oxygen in the power-to-gas technique.While the hydrogen is being used, the by-product oxygen can be reused or released into the environment.

Hydrogen is the most abundant element on the planet and offers tremendous promise for innovation. It can be used as a fuel or source of energy, as well as raw material in manufacturing industry. Electrolysis technologies are on the verge of becoming profitable, and fuel-cell systems are already in use. However, in fact for hydrogen from power-to-gas facilities to be successfully marketed economically, Germany has set to build a technology-open legal environment for the use of green hydrogen on a large scale.

Due to its ability to cut carbon emissions, green hydrogen has been in great demand in recent years. It also helps meet the world’s rising needs. Because it is a long-term energy source, its use is projected to rise. The global green hydrogen market is predicted to develop as people become more aware of the benefits of using hydrogen as an energy carrier. Furthermore, the industry is being driven by an increase in environmental concerns, emphasizing the need for clean energy generation to reduce emissions.

Due to the rise in rules and laws favoring green hydrogen in the energy sector, the green hydrogen market will see a boost in revenue. This is in addition to growing environmental worries over increased carbon emissions from the use of fossil fuels. Moreover, the growing number of hydrogen integration projects will expand the global market’s footprint. Furthermore, the ability to conveniently store green hydrogen and use it at a later period of time will propel the market growth for green hydrogen during the forecast period.

The mobility end use industry has the greatest proportion of the green hydrogen market in terms of value. This is due to the fact that hydrogen has three times the energy per unit as fossil fuels. The mobility industry had no viable alternatives to fossil fuels before the commercialization of fuel cell-based engines. However, fuel cell electric vehicles offer a long-term solution. For the automotive sector, green hydrogen is a realistic and practical option. Green hydrogen-powered vehicles are ideal for variety of purposes.

Scope of the Green Hydrogen Market

Based on the region, the Europe segment dominated the global green hydrogen market in 2022, in terms of revenue and is estimated to sustain its dominance during the forecast period. The hydrogen is the primary source of energy in Europe. The European Green Deal aims to reduce greenhouse gas emissions while also preparing Europe’s economy for a climate-neutral future.

In the green hydrogen market, there is fierce rivalry to reduce manufacturing costs, develop innovative process technology, expand, and enhance the usage of green hydrogen in end use sectors. The key market players are attempting to grow their market shares by employing various techniques in response to such possibilities in the sector.

Some of the prominent players in the global green hydrogen market include:

By End Use Industry