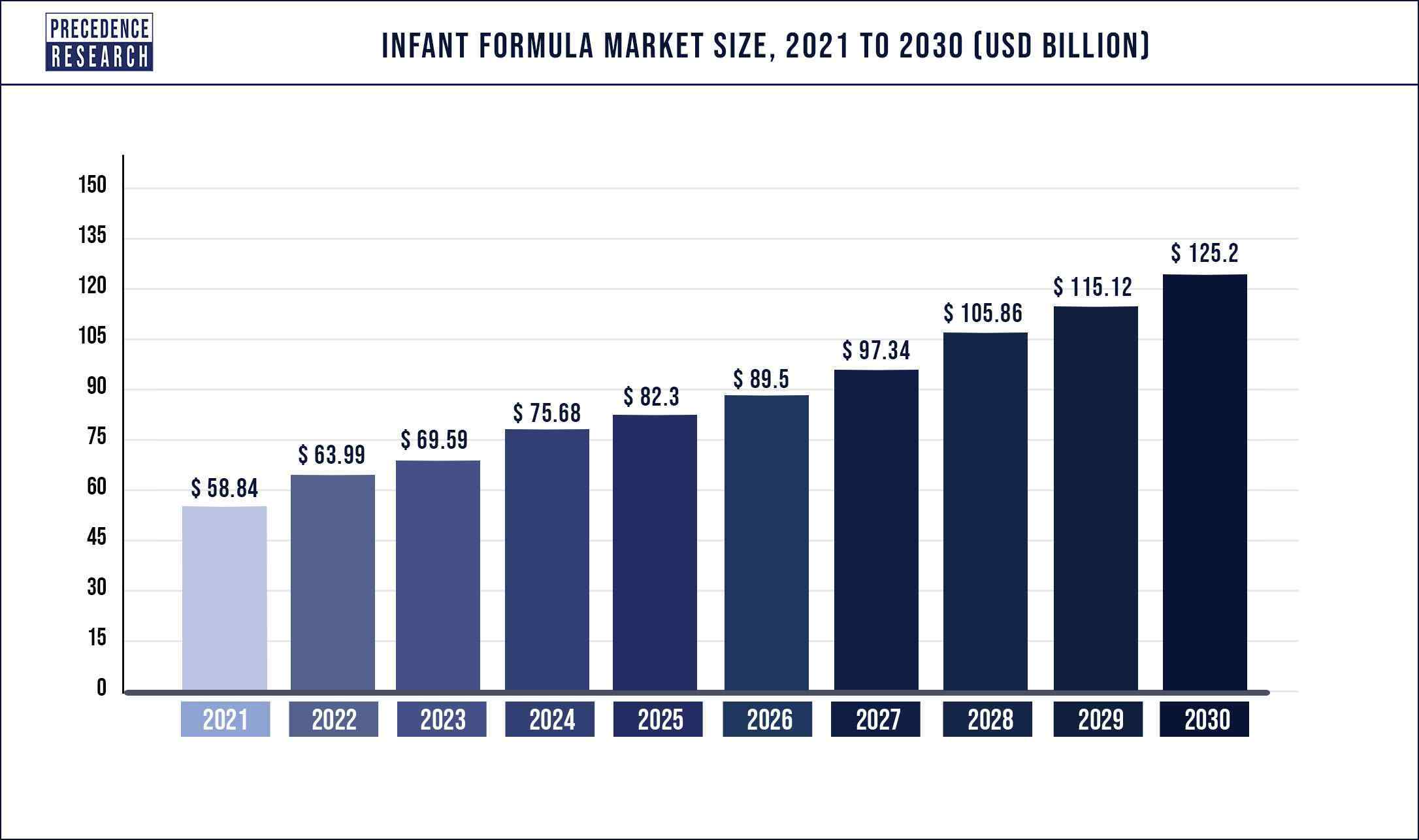 Infant formula is specially designed formula for infants, preferably under one year of age. Many Governments Safety and Standards Agency of India (FSSAI), World Health Organization (WHO) and others have specific regulations to ensure high quality of products. Strict regulations on product quality are expected without hesitation. For example, in 2019, the FSSAI drafted new rules relating to standards for infant formula, milk substitutes for premature infants, and milk substitutes for infants.

The global infant formula market is projected to grow strongly due to the growing global demand for organic food for children under 5 years of age. The increasing cases of malnutrition in children and infants have spurred demand for infant formula.

An increasing number of working mothers around the world have encouraged baby food companies to introduce nutrient-rich supplements to ease the need for convenient nutrition. At the same time, companies are adopting environmentally friendly methods for packaging materials, which has increased the growth prospects of key companies.

Key companies including Nestlé SA, Danone and Abbott Nutrition are working to develop animal-free baby foods that contain the same nutrients as breast milk. Cases of stunting, malnutrition and increasing numbers of women unable to breastfeed have increased the demand for infant formulas globally.

By type, the infant milk formula segment accounted largest revenue share in 2021 and is expected to dominate during the forecast period. The demand for infant formula segment is continuously growing as it is one of the key segments when there are no accepted alternatives in the market. The limited availability of convenient and nutrient-rich products has grown and created innovative products in the market. The growing prosperity of consumers towards their infants in the wide range of baby formulas available in the market.

However, the follow-on- milk segment is expected to witness the highest CAGR in global market in further milk preparation to mimic the nutritional function of breast milk due to its high protein, calcium, iron content and the growing market for infant formula. Additionally, with infants with low iron intake or poor weaning nutrition, subsequent milk requirements are expected to increase at a healthier rate.

Depending on the distribution channel, the supermarkets & hypermarkets segment accounted highest revenue share 40% in 2021. The market has witnessed rapid demand through supermarkets & hypermarkets channels. The separate sections for babies, product bundles, programs, discounts, offers and convenient shopping experiences for shoppers under one roof has  increases the footfall for  infant formula which in turn is contributing in fueling the growth of the overall market In terms of value sales. 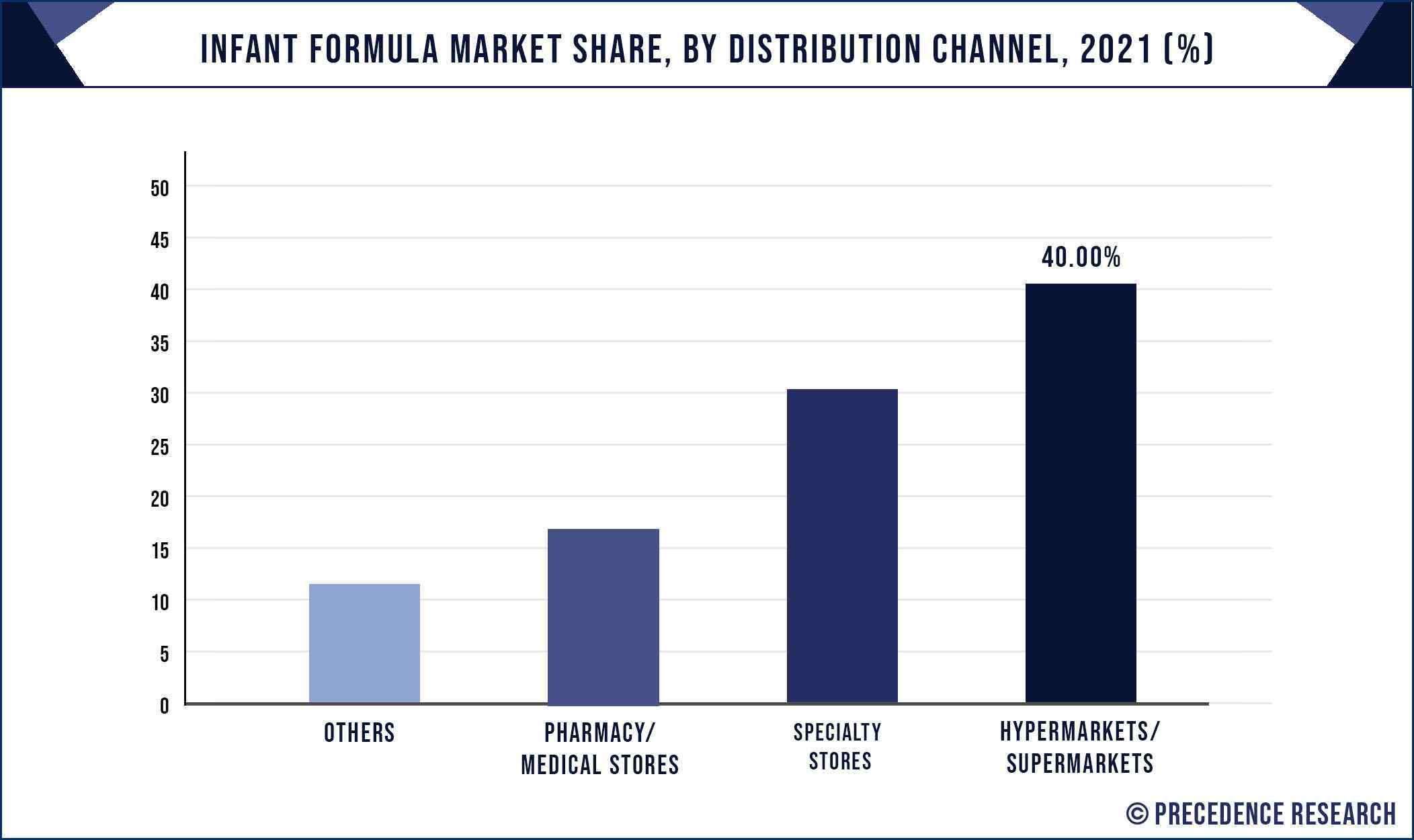 However, the specialty store is expected to be the fastest growing segment during the forecast period. This is because the store offers a wide range of baby substitutes as well as other baby care products under one platform along with convenient way to shop with consumers to buy from specialty stores.

Asia-Pacific region accounted largest revenue share in 2021. The APAC market is mainly driven by strong demand stemming from high birth rates in countries such as China and India. Additionally, domestic industry and a greater reliance on imports amid growing demand for growth, quality and higher premiums. The presence of China, the largest consumer of baby and infant food products in the world, is contributing in bolstering the market growth. In addition, China's decision to abolish the "one-child" policy and increase the birth rate is expected to fuel the market growth.

North American infant formula demand is expected to grow at a steady growth rate during the forecast period. Additionally the US is expected to contribute the majority of infant formula sales in this region. The growing demand for organic baby formula has increased production by large companies, facilitating a growing demand across the country. The increase in the number of women entering the workforce and the demand for nutritious baby food are contributing to the growth in this region.

France and Germany are expected to record healthy growth over the forecast period. France and Germany are the main producers and exporters in the global infant formula market. The growing demand for organic baby food has spurred demand for infant formula throughout Germany. The presence of nationally known companies, the infant formula industry is growing with the increasing popularity of online stores across the country. The growing penetration of online pharmacies and retail stores is facilitating the growing nationwide demand for infant formula. An increasing number of working mothers in Germany and France contribute to the increase in infant formula production. Thus, the aforementioned facts are contributing in driving the overall growth of the market in terms of value sales.

Some of the prominent players in the global infant formula market include: