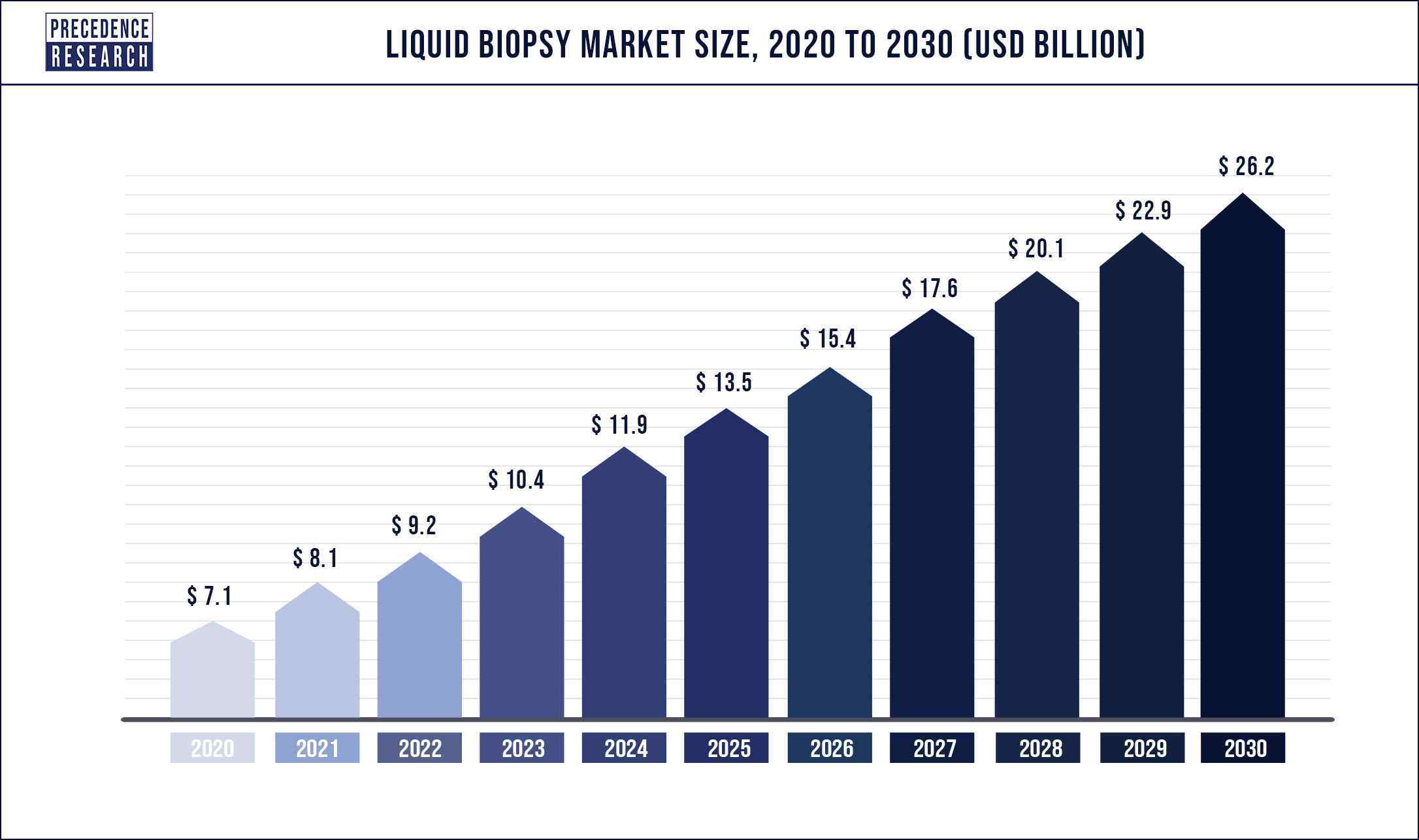 The global liquid biopsy market is primarily driven by the rising prevalence of cancer among the global population and rising awareness regarding the availability of different non-invasive treatments. As per the data provided by the International Agency for Research on Cancer in the GLOBOCAN 2020 estimates, around 19.3 million new cases of cancer and around 10 million deaths were reported due to cancer in 2020. The rising prevalence of breast cancer among the female population has made it the most common type of cancer diagnosed across the globe. In 2020, around 2.3 million new breast cancer cases were recorded, closely followed by the lungs cancer, colorectal cancer, and prostate cancer. Cancer is the second most leading cause of death across the globe, as per the World Health Organization. There are several benefits associated with the new liquid biopsy technique such as rapid results, low cost, early prognosis, overcoming tumor heterogeneity, low risk, and non-invasiveness. All these benefits of the liquid biopsy over the traditional diagnosis is fueling the adoption of the liquid biopsy among the patients across the globe, and is expected to significantly drive the demand during the forecast period.

The increased awareness about the cancer is boosting the liquid biopsy market growth as liquid biopsy technique can detect the cancer early, can monitor progression of tumor, and can assess clinical prognosis. Moreover, the proliferation of advanced technologies has boosted the demand for the non-invasive diagnosis and treatments that is expected to spur the demand for the liquid biopsy in the forthcoming years. The rising investments by the market players in the clinical trials for the development of innovative diagnostic solutions is exponentially contributing towards the market growth.

The test/service segment was reached at $1,653.9 million in 2020 and expanding growth at a CAGR of 17.48% over the forecast period. The growth can be accredited to the rising demand for the test/service.

The kits and consumables segment was reached at $1,076.4 million in 2020 and growing at a notable CAGR of 13.65% from 2021 to 2030. The growth can be accredited to the rising demand for kit, due to inaccessibility of direct laboratories with infrastructure to undertake the liquid biopsy tests of most of the patients in need, the liquid biopsy market excessively relies on the distance collection of samples by transporting the diagnostics kits to the patient.

Based on the technology, the multi-gene parallelanalysis (NGS) segment accounted 57.4% revenue share in 2020. This is attributed to the higher efficiency of the NGS technology to detect even the lower frequency variants of cancer. The advancements in the NGS has resulted in the increased adoption of this technology as it can detect rare and novel mutations of cancer easily.

On the other hand, the PCR is estimated to be the most opportunistic segment during the forecast period. The adoption of PCR is rising owing to its rising uses for numerous purposes such as detecting fungal infections, bacterial infections, gene mapping, and other genomic applications. The quick and real-time diagnostic results provided by the PCR tests is accurate and it can guide the targeted therapies for the cancer treatment. The PCR is gaining immense popularity and is expected to witness a significant growth rate in the upcoming years.

The global liquid biopsy market (by clinical application) is currently being dominated by treatment monitoring. The contribution of treatment monitoring was valued at $1,385.5 million in 2020 and is expected to reach $5,768.1 million by 2030, witnessing a CAGR of 15.33% during the forecast period. The growth can be accounted to the increased awareness and adoption of liquid biopsy tests for the early detection and treatment of cancer. The increase in the prevalence of the geriatric disease is witnessed, thus increasing the adoption of non-invasive biopsies.

The prognosis and recurrence monitoring segment was reached at $819.5 million in 2020 and is anticipated to reach $3,172.4 million by 2030 with a CAGR of 14.50% over the forecast period. Some of the companies providing liquid biopsy techniques for the prognosis and reoccurrence monitoring of the disease are adaptive biotechnologies and pathway genomics, among others.

Based on the application, the cancer segment dominated the global liquid biopsy market in 2020, in terms of revenue and is estimated to sustain its dominance during the forecast period. This is simply attributed to the increased adoption of the liquid biopsy techniques for the diagnosis of various types of cancer. The increased prevalence of cancer cases among the global population has boosted the growth of the cancer segment. According to the International Agency for Research on Cancer, the most prevalent types of cancer includes lungs cancer, breast cancer, prostate cancer, and colorectal cancer. The cancer cases across the globe is estimated to rise by 47% from 2020 to 2040, and the number of cancer cases are estimated to be 28.4 million by 2040 across the globe. Hence, this is expected to sustain the significance of this segment throughout the forecast period.

The circulating tumor cells was reached $1,055.2 million in 2020 and is expected to hit $4,720.5 million by 2030 with a CAGR of 16.16%. The growth can be accredited to the rising demand for the CTCs biomarker for the early detection of cancer by performing non-invasive biopsies.

Circulating tumor cells or CTCs are the cells, which are being shed from the cancer tumor and are then circulated through the bloodstream. The advancements in the technologies, which help in the detection of CTCs from different body fluids have permitted the early detection of different types of cancers through minimal invasive techniques. The probable risk of cancer is mainly determined through the subsequent outgrowth of different tumor cells in new micro-environments of the body. Detecting CTCs and extracting required data still proves to be a tough approach due to their low concentrations in biological fluids. Their detection and characterization require highly sensitive instruments. The process of detecting CTCs includes enrichment of cell culture, purification, detection, and analysis of the sample.

The real-time liquid biopsy through CTCs analysis includes the collection of peripheral blood samples from the patient who is to be diagnosed. Later, the CTC enrichment is done by using both the physical properties (size, density, electric charges, and deformability) and the biological properties (cell surface protein expression and viability). After the enrichment of the sample, CTCs are needed to be identified from the blood mixture (mixture of leukocytes and CTCs). The detection can be carried out by making the use of protein-based or mRNA-based staining assays.

The developments in in-vivo techniques enable to bypass the limitation of the low concentration of CTCs. With the use of nano detectors, the samples with appreciable CTC concentration can be prepared for further analysis.

On the other hand, the circulating tumor DNA is expected to be the fastest-growing segment during the forecast period. The circulating tumor DNA helps in the early detection of the cancer and its mutation. It is most efficient in detection of the breast cancer. Therefore, the rising prevalence of breast cancer is expected to boost the growth of this segment. As per the GLOBOCAN report, breast cancer has surpassed the lungs cancer as the most diagnosed type of cancer across the globe in 2020.

The Cell-Free DNA segment was reached $1,691.8 million in 2020 and is anticipated to reach $7,255.4 million by 2030 growing at a CAGR of 15.67%. The growth can be accredited to the rising demand for cfDNA kits due to easier isolation of cfDNA in the bloodstream owing to early detection of cancer by liquid biopsy test.

Why North America region has dominated the liquid biopsy market? 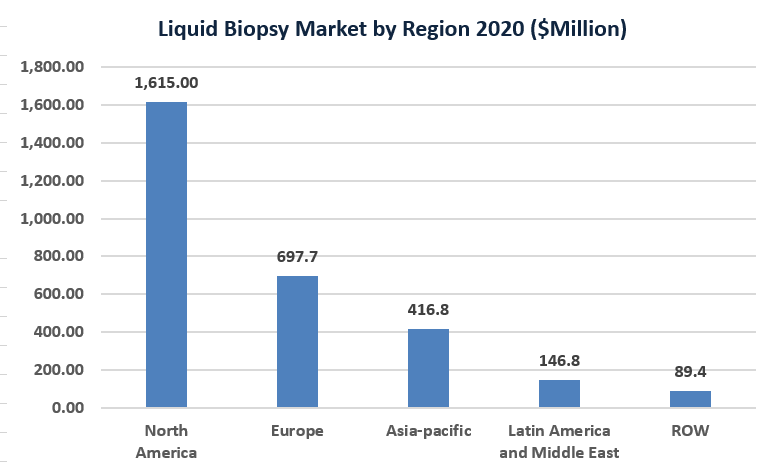 Why Asia Pacific region will grow faster in the liquid biopsy market?

Some of the prominent players include:

By Types of Sample