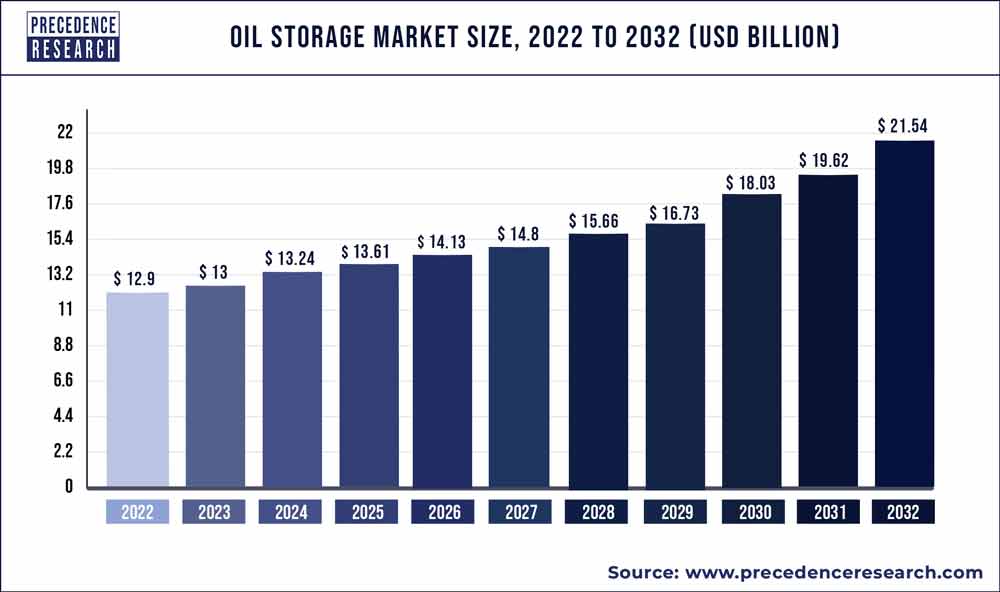 Terminals or tanks used to store generated or processed oil above or below ground are referred to as oil storage facilities. The tanks transfer and treat the reservoir through several phases. The type of oil and its characteristics influence the material and form of tanks. There are several distinct styles of storage tanks, including open-top, fixed roof, floating roof, single skin, double skin, and bunded. Wooden storage tanks were used in the early 1980s; they have since been replaced with those made of stainless steel, polyethylene, carbon steel, or reinforced concrete. Security from short-term supply changes of crude oil and its derivatives is another benefit of oil storage. When compared to the market from end-use sectors, the growth rate of oil production is much higher. Storage tanks come in a variety of sizes and forms. Tanks may need to be rectangular, in the shape of horizontal cylinders, or even spherical depending on the use. Hydrocarbon or chemical materials are frequently stored in full loads in horizontal cylinders and spheres. The vertical, cylindrical storage tank is the most often utilized design.

The global oil storage market is primarily propelled by an ongoing improvement in the energy picture together with rising anxiety about meeting the need for emergency crude oil supplies. The market is expanding as a result of rising import-export activity in the petroleum sector. Logistics and transportation are essential tasks in the oil and gas sector.

Scope of the Oil Storage Market

On the basis of product type, the crude oil segment is expected to have the largest market share of around 52% in the coming years period. Over the projected period, rising crude oil output is anticipated to enhance storage, combined with declining downstream and midstream demand. The development of more cutting-edge refinery facilities and the increased demand for low-sulfur distillates are responsible for the expansion. The installation of upgrade units, which increase the productivity of middle distillates and consequently fuel its storage market expansion, is anticipated to be a result of expanding refining investments throughout Asia-Pacific nations.

The category for gasoline is anticipated to see the greatest CAGR throughout the projection period. Due to its high blazing energy, the segment's rise can be ascribed to reasons related to its use as a car fuel. It is more frequently utilized in production, forestry, landscaping, and agricultural equipment.

On the basis of storage type, the fixed roof oil storage market category held the greatest market share, representing more than 49% of the total market volume. The fixed roof oil storage's high degree of containment, which lowers the chance of a fire occurrence, can be credited with the segment's expanding penetration. Furthermore, it is anticipated that falling installation costs associated with fixed-roof designs would further increase demand for these goods. 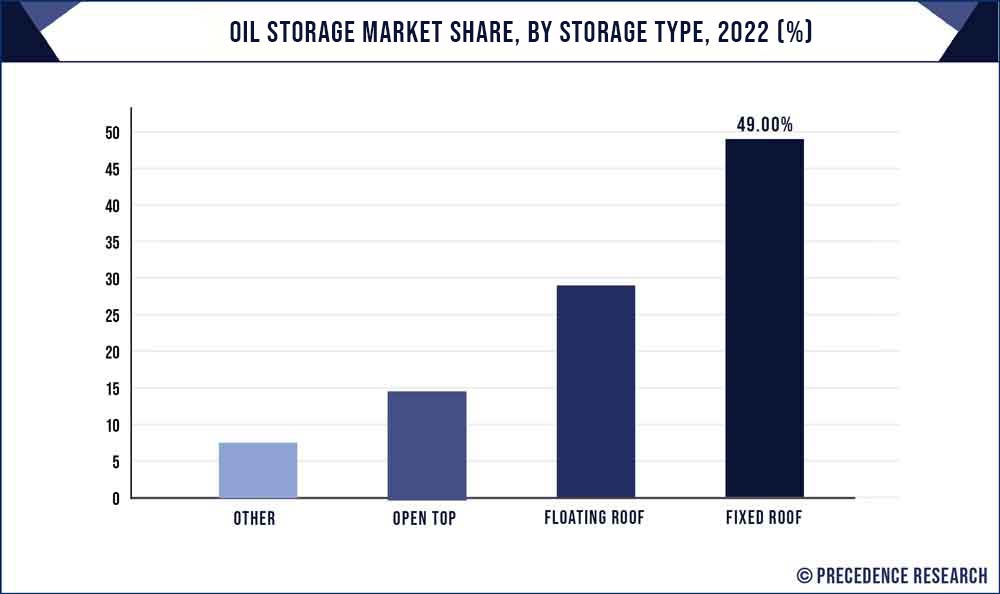 During the projection period, the floating roof sector is anticipated to have substantial expansion. The efficient design of the floating roof, which lessens corrosion and evaporative losses, is what is largely driving demand in this market. This segment's oil storage market is anticipated to increase as a result of the consistently rising demand for the storage of hydrocarbons with medium and low flash points.

The Middle East and Africa region was dominated the market in 2021 with a revenue share of around 35.4%.

The LAMEA is expected to continue to be among the most alluring markets and this region is accounted for the majority revenue share in the market throughout the projection period. The expansion of the oil storage industry in the area is being driven by an increase in the number of productive refineries and rising oil production in nations like the UAE, Saudi Arabia, and Kuwait.

The Middle Eastern market will continue to dominate the market in terms of revenue during the anticipated period as a result of the growing demand for petroleum products across multiple industrial and commercial sectors in numerous countries throughout the region. In countries like the UAE, Saudi Arabia, and Kuwait, improved refinery throughput and increasing oil output are predicted to grow the industry. The demand for petroleum and distillates in the industrial sectors is predicted to cause the requirement for storage tanks in the area to keep growing.

By 2030, it is expected that Asia Pacific would account for more than 43% of the global oil storage market. To satisfy the soaring petroleum demand, there is an increasing focus on hoarding crude oil for commercial and emergency uses, which will boost regional industry share. Key oil manufacturing enterprises are expanding both greenfield and brownfield across the country. Additionally, the region will use a lot more storage containers as a result of the increase in yearly refinery throughput.