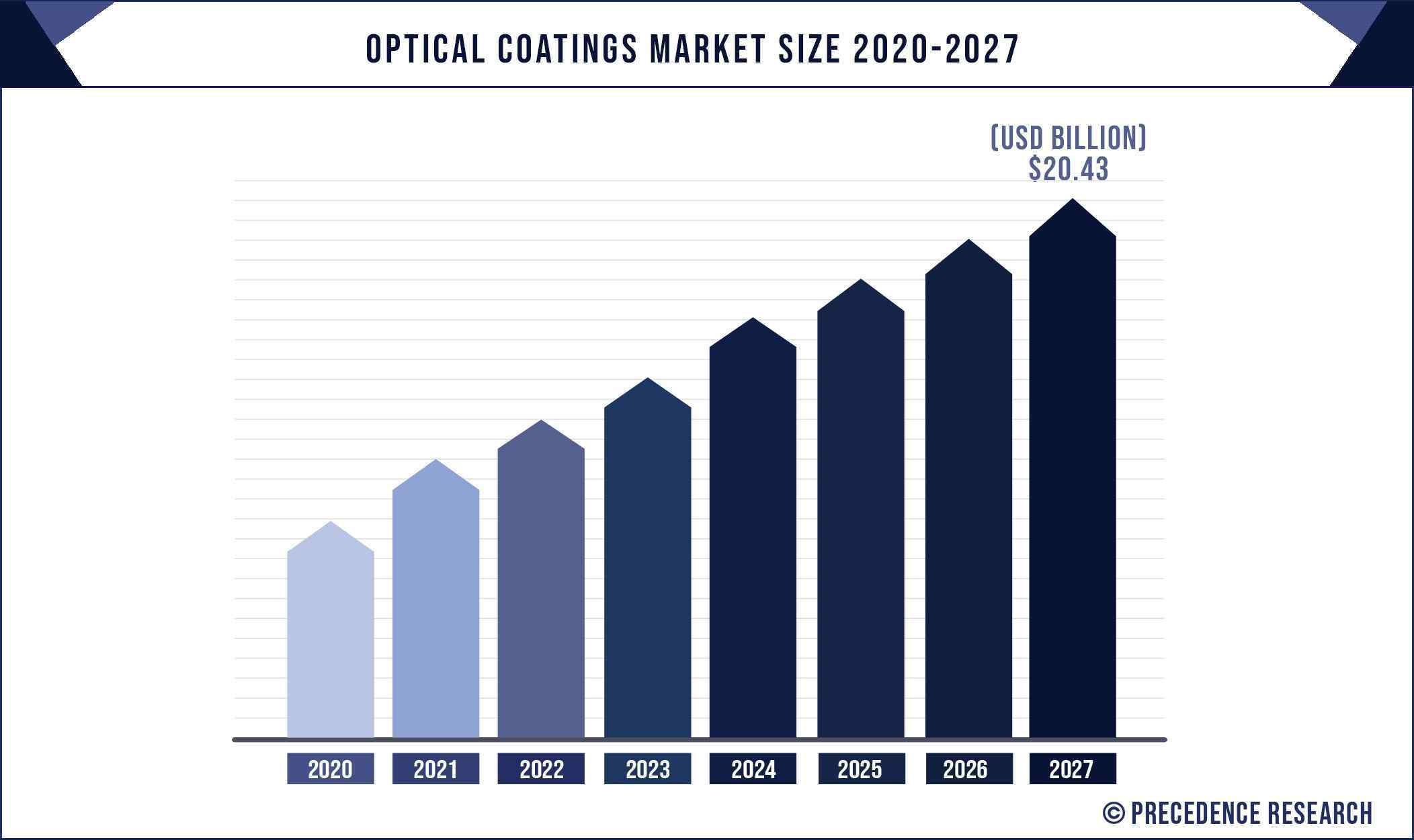 Recent advancements in the sector of optical deposition techniques & fabrication along with increasing demand for efficient and more effective optical devices from various end-use applications expected to prosper the market growth. Optical coatings are prominently used in diverse range of applications that includes consumer electronics, architecture, automotive, solar panels, telecommunication, medical, and military &defense. Further, increasing focus towards clean energy generation in order to curb the alarming rise in pollution is majorly responsible for the rapid growth of solar Photovoltaic (PV) market that in turn propel the market growth for optical coatings.

Additionally, increasing demand for reflective coatings mainly in green buildings in order to reduce energy consumption and retain heat inside the building estimated to thrive the product demand during the analysis period. Apart from this, reflective coatings are largely used in telecommunication, construction, and space applications. Moreover, increasing demand for consumer electronic products most prominently across the Asia Pacific is likely to boost the market growth over the upcoming years. Increasing usage for handheld consoles along with growing demand for portable electronic products expected to fuel the market growth during the upcoming years.

The anti-reflective product segment dominated the market accounting for over 30% share of the overall revenue in the year 2019. Anti-reflective coatings referred as thin-film optical coatings that comprises of multiple layers of coatings with dissimilar refractive indexes between every layer. Thickness of each layer is designed as to provide a self-extinguishing interference for the beam of light that are reflected by the surface. Hence, this feature of the product makes it suitable for camera lenses, display screens, magnifying lenses, and eyeglasses. Further, increasing demand for anti-reflective optical coatings mainly for the construction of automotive displays, photovoltaic solar panels, GPS navigation systems, and windows projected to fuel the market growth over the analysis period. 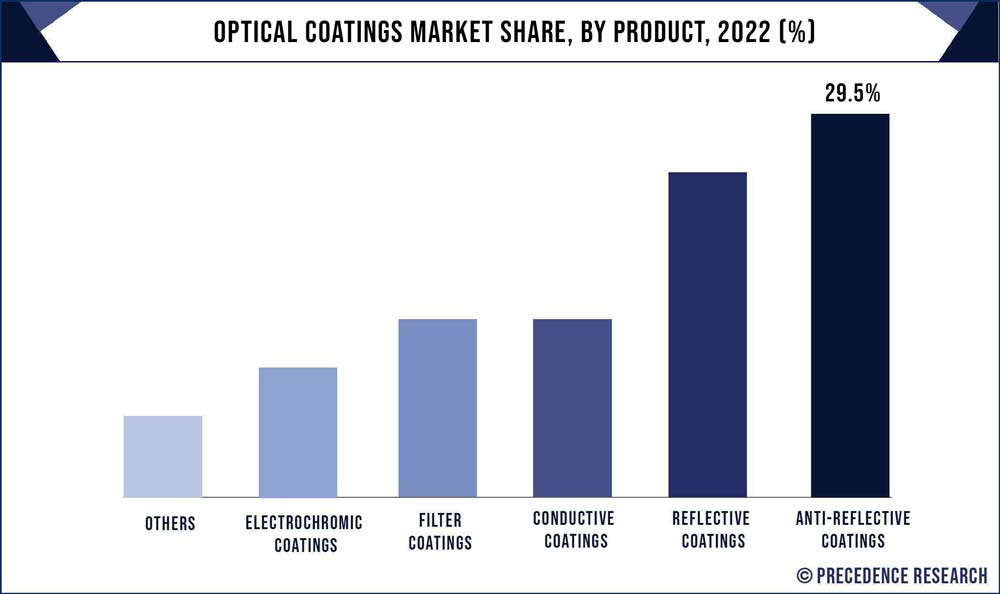 On the other hand, conductive coatings segment estimated to exhibits lucrative growth over the forthcoming years because of its large-scale application in solar panels. Furthermore, growing emphasis for the development of alternate sources for energy generation together with rise in investments for solar energy generation across various countries, such as the U.S., India, and China predicted to prosper the growth of the segment.

Consumer electronics captured major market share in the global optical coatings market accounting for over 33% of the total value in 2019. Rapid growth in demand for smartphones coupled with rising disposable income of consumers anticipated to drive the growth of the segment over the upcoming years. Furthermore, on-going technological advancements in smart consumer devices and smart televisions, such as smartphones and smartwatches estimated to positively influence the market growth during the forthcoming years. In addition to this, surge in demand for multi-functional devices as well as their manufacturers expected to drive the demand for optical coatings in the coming years. 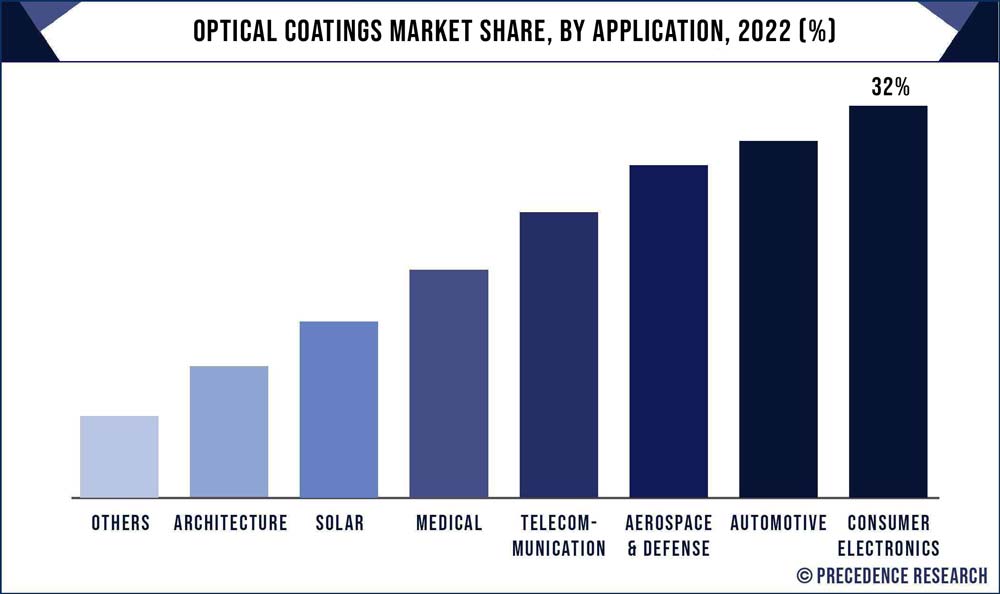 Automotive industry is the other most important application segment for the market owing to its application in speedometer display due to its properties such as high abrasion resistance and impact resistance. Similarly the optical coatings are largely used in numerous components of automobile. Abrasion-resistant and UV resistant coatings are the commonly used products in the automotive components.

North America led the overall market and accounted for a value share of more than 37% in the year 2019. Significant growth of solar industry particularly in the U.S. along with increased focus towards the development of domestic industries in the region is some of the key factors that anticipated to drives the demand for the product. Further, increase in the defense budget for the U.S. creates immense growth potential especially for reflective coating products in the industry. 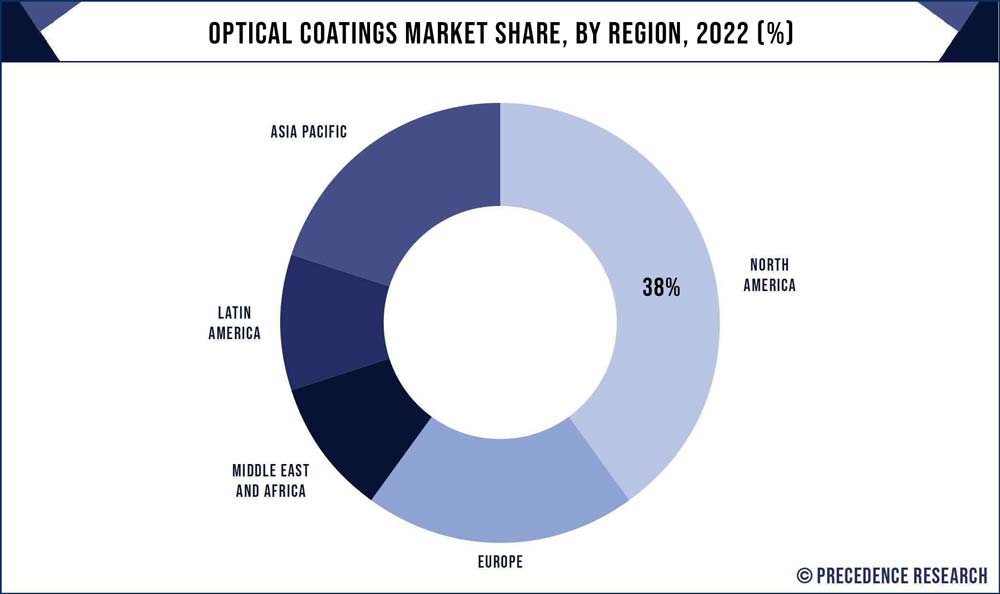 Besides this, the Asia Pacific estimated to exhibit significant growth over the upcoming years. Rising demand for consumer electronics that include tablets, mobiles, LED screens, cameras, personal computers, and video games console expected to propel the market growth for the region over the analysis period. Further, the region estimated to have immense opportunity for automotive and manufacturing sectors that further anticipated to proper the market growth in the region.

The global optical coatings market is a highly opportunistic market and offer lucrative growth potential for the market players. In the wake of same, most of the market players are focusing largely on providing differentiated products for various end users in the industry. Further, increasing demand for solar energy has further attracted various market players to strengthen their foothold in the new and emerging market.

Some of the prominent players in the optical coatings market include:

This research study comprises complete assessment of the market by means of far-reaching qualitative and quantitative perceptions, and predictions regarding the market. This report delivers classification of marketplace into impending and niche sectors. Further, this research study calculates market size and its development drift at global, regional, and country from 2016 to 2027. This report contains market breakdown and its revenue estimation by classifying it on the basis of product, application, and region: 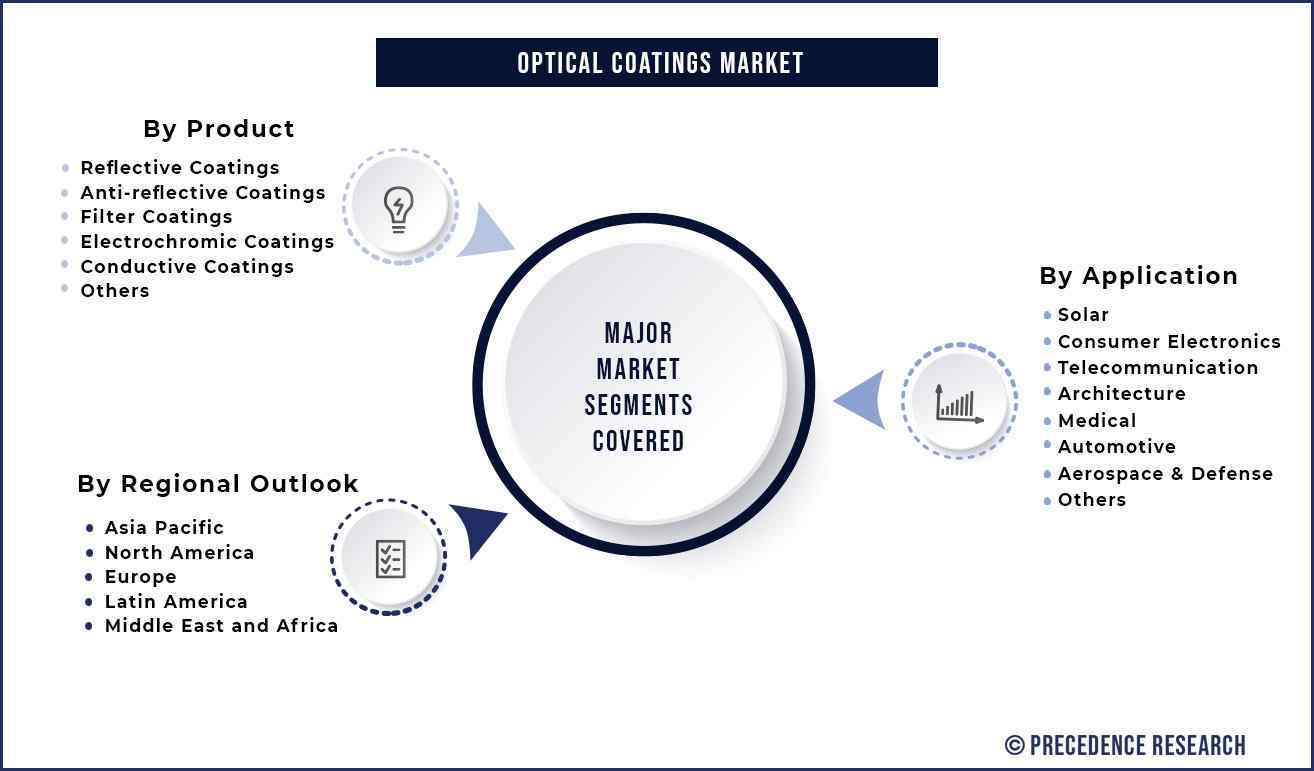