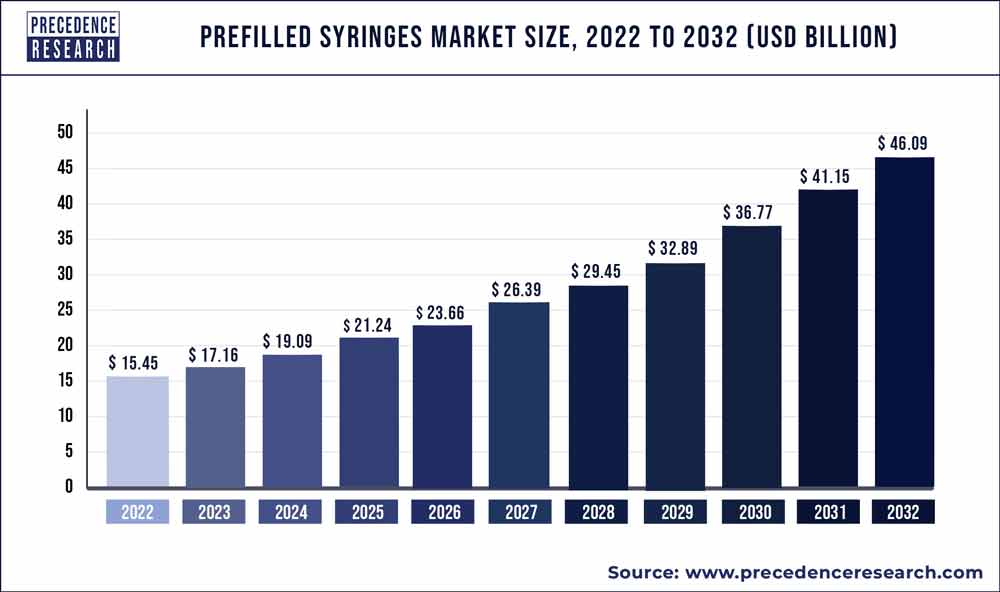 A pre-filled syringe is also recognized as a package which is comprised of single-dose of medicine in which an attached needle also provided by the manufacturer. Previously, metal or glass syringes were very common in the industry of industry, but slowly & steadily consumer shift have been observed more towards disposable or plastic syringes in order to secure the needle and make it use and throw so that it cannot be re-utilized. In addition, this has revitalized the demand towards safe and convenient pre-filled syringes in the pharmaceutical market over conventional glass vials for storing drugs.

The impact of the driving factors is anticipated to surpass the effect of restraints. Also, the technological advancements leading to advanced adoption rate and untapped markets in the developing countries are anticipated to give new avenues for the growth of market in the near future. Likewise, growing use of technological advancements and prefilled syringes in auto-injectors are the crucial factors propelling the market. Furthermore, prefilled syringes are fleetly swapping traditional combinations of syringe-vial owing to advantages provided by them, similar as convenience for healthcare practitioners and increased patient safety in cure medication and delivery.

These syringes enable easy operation of chronic diseases, similar as rheumatoid arthritis, and diabetes which is anticipated to boost the use of auto-injectors and pen injectors during the forecast period. Therefore, the growing frequency of chronic disease like diabetes and other diseases is likely to fuel the market demand over the upcoming time period. In addition, the launch of advanced equipment with Wi-Fi and Bluetooth connectivity easing effective operation of patient health records is also anticipated to boost the product demand.

In addition, the usage of pre-filled syringe has skyrocketed owing to the numerous difficulties in the traditional process. There are various advantages pre-filled syringes have in place of traditional packaging in vials which comprise of ease in use. As prefilled syringes efficiently mitigate the processes which is further required before using any drug in a vial. Moreover, it further helps in removing errors while providing doses to the patient’s as prefilled syringes are importantly comprise of the exact dose required for the patient. In addition, numerous producers of pharmaceuticals overfill their vials by up to 18%, however, this overfilled of vials is likely to cause many errors while giving a dose to the patient which can easily be mitigated with the help of the pre-filled syringes. Also, there exists excessive syringes development and various new products have been launched and are being kept in syringes now for the microbial safety. Pre-filled syringes are used in the packaging of injectable and diluents drugs. Some of the majorly listed drugs packaged in pre-filled syringes includes vaccines, blood stimulants, ervthroproteins, therapeutic proteins, and rheumatoid arthritis. Thus, comfort in utilization and better safety of the drug is the major factor which is leading to rise in demand for prefilled syringes in the market.

The impact of the COVID-19 on the market is likely to be more varied owing to the upsurge manufacturing of vaccines. In addition, growing demand for similar syringes instead of glass ampoules or other alternate needles have been observed on account of the decreased trouble of needle injuries. Accordingly, in order to boost the production of the COVID-19 vaccination, the producers are increasing their manufacturing capability.

On the basis of type, safety prefilled syringes segment is likely to foresee the loftiest growth during the forthcoming time period majorly owing to the growing senior population worldwide and biological therapies availabilities for patients with suffering from chronic diseases and low- threat medical procedures outsourcing for chronic patients ease some of the pressure on hospitals.

The glass prefilled syringes segment reckoned for the largest share of the prefilled syringes in 2020. The large share of this segment is attributed to the significant benefits offered, similar as forestallment of oxygen and water vapor from interacting with medicine composites, comity with different stuffing machines, and flawless integration into pharmaceutical companies PFS operations.

The single- chamber prefilled syringes segment reckoned for the largest share of the prefilled syringes market. Furthermore, the market growth is majorly attributed to the significant benefits with the usage of prefilled syringes of single-chamber over vials, similar as optimized API use with lower overfill, lower medicine waste in clinical trials, reduced material requirements, and simple storage& disposal. Also, upsurge in self-administered parenteral medicines adoption owing to the adding frequency of various chronic diseases and advantages offered by them.

Some of the prominent players in the global prefilled syringes market include: