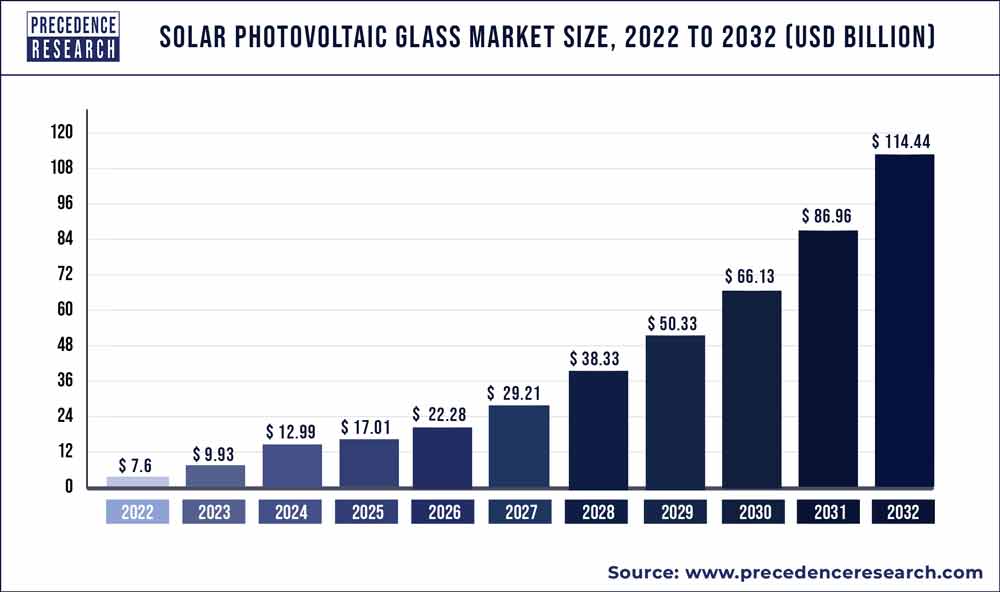 Additionally, the growing preference for renewable energy sources as a result of growing environmental concerns is anticipated to support the growth of the solar PV glass market throughout the course of the projected period. During the forecast period, favourable government regulations such as the Kyoto Protocol Act, which promotes the use of solar PV panels by lowering carbon emissions, are also anticipated to drive the market for solar PV glass. Buildings and rooftop systems may readily include solar PV glass, resulting in the production of renewable energy through the efficient utilization of solar energy and innovative architectural design.

Additionally, it is estimated that the market for solar PV glass would expand over the course of the projected period due to consumers' increasing preference for renewable energy sources as a consequence of growing environmental concerns. Favourable government laws like the Kyoto Protocol Act, which encourages the use of solar PV panels by reducing carbon emissions, are also expected to propel the market for solar PV glass throughout the projected period. Solar PV glass is easily incorporated into buildings and rooftop systems, enabling the generation of renewable energy through the effective use of solar energy and creative architectural design.

The market for solar PV glass is expanding as a result of rising PV installations and supportive government policies. The utilities sector is anticipated to present significant potential for solar PV glass over the forecast period because to the rising power needs and relatively cheaper costs associated with solar PV installations compared to traditional energy sources. The market for solar PV glass is also anticipated to grow during the projected period due to expanding awareness of the advantages of renewable energy sources and the pressing need to reduce emissions.

During the projection period, more PV installations in the residential sector are anticipated due to rising disposable incomes. This would significantly increase the demand for solar PV glass throughout the anticipated period.

Hotspots on the panels can restrict the solar photovoltaic glass market

The hot spots are areas of the plates that are overworked and get moist. Hotspots on panels are typically the consequence of poorly lost connections or a structural flaw in solar cells. Low resistance is caused by bad solder joints in the area of the panel that receives the electricity generated by the cell. This occurrence will ultimately result in a short circuit, which will lower the PV panel's efficiency and longevity. We have discovered hot spots in certain solar parks, necessitating the replacement of solar panels and significantly raising the projects' Opex expenses.

Additionally, governments in several nations have worked to promote the use of renewable energy sources in order to provide lucrative chances to market participants throughout the projected period of 2022 to 2030. The development of green building construction methods, which increasingly use solar photovoltaic glasses as a component of sustainable construction, also contributes to the market's future growth.

It offers producers in the solar photovoltaic glass market sector enormous expansion prospects. Off-grid technology is viewed as the most practical way to fixing power concerns in deep pockets across important developing countries in the globe, where more than a billion people live without access to electricity. This includes offering fundamental heating and lighting services to some of the most isolated regions of the globe where grid connections are impractical. Off-grid electricity systems are commonly powered by solar energy, and nations like China and a few others in the South East Asia Pacific region have taken use of the potential of small-scale solar technology applications to bring electricity to residents in isolated rural locations.

In 2021, the solar photovoltaic glass market's highest market share belonged to photovoltaic glass. Solar photovoltaic (PV) glass is a type of glass that uses solar cells to convert solar energy into electricity. This is installed inside a building's roof or façade area to generate electricity for the entire home. These glasses feature a special resin filler, and between the two glass panes are solar cells. The solar cells are securely bound by these polymers on all sides. A frame that is linked to other cells is created by joining each cell to two electrical connections.

Other reasons boosting the market for Solar PV glass include government assistance for the development of Solar PV facilities. In addition, the market for solar PV glass is expanding due to the rising demand for home, business, and utility-scale solar systems. Solar photovoltaic glass is still not in high enough demand on a worldwide scale. Opportunities for market expansion are anticipated to result from the increased demand for renewable energy.

In 2021, the Solar photovoltaic glass market's highest share belonged to high transparency. 61% of the sunlight they get is absorbed by high transparency solar photovoltaic glass. Performance of these glass panels is 7.2% as opposed to standard solar photovoltaic panels' performance of 12.2%. Because the panel only absorbs 60% of the light and transmits the other 40% via the screen, the output is reduced. Invisible wavelengths of sunlight are absorbed by organic molecules in transparent windows to produce solar panels. These clear solar windows have a lot of promise. 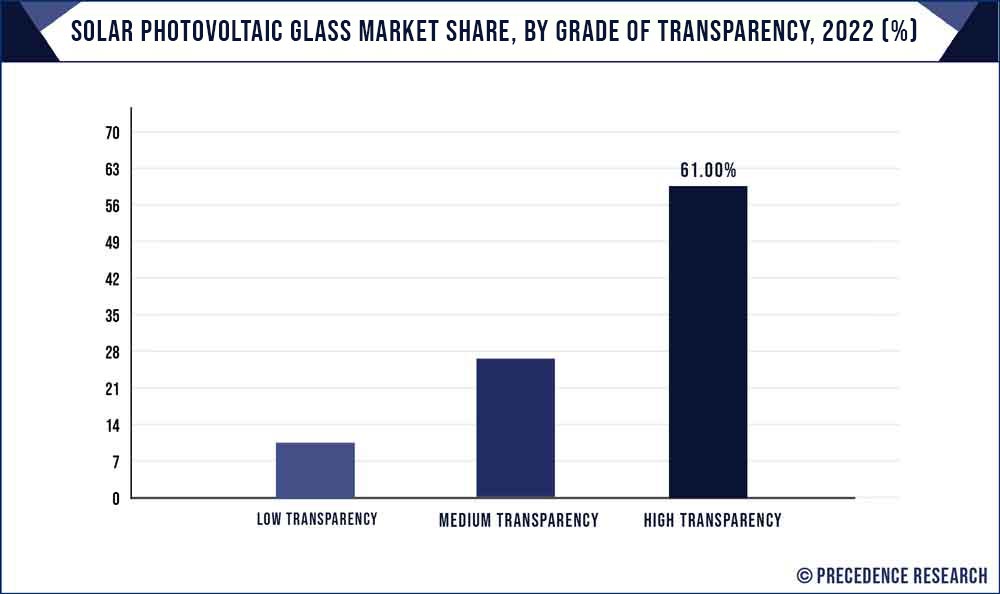 In the US alone, there are up to 7 billion square meters of glass surfaces. Surface space that has to be transparent might be used by these materials integrated in windows. In fact, if the transparency of the material can be adjusted, they may also be utilized as illumination to keep people inside buildings cooler, helping to save the costs associated with air conditioning.

In the Solar photovoltaic glass market, Facades is anticipated to have the largest share in 2021. Because they reduce the cost of cement or adhesive purchases and are energy efficient, facade panels are also economical. Due to the increasing increase in the building of residential, commercial, and industrial structures worldwide, the global facades industry is expanding rapidly. The need for such energy-efficient materials has expanded as a result of the technological developments in the building and infrastructure sectors. Over the past five years, the commercial building sector has experienced phenomenal growth.

The expansion of infrastructure investment continues to fuel the building and construction industries, which in turn fuels the need for facades. Due to the many advantages the facade system offers, including acoustic insulation, thermal insulation, and natural ventilation, the commercial application was the area with the highest demand for facades. The commercial sector continued to develop throughout 2019, but recently it has slowed as the possibility of a slowdown in global construction rises as a result of the COVID-19 pandemic, which temporarily shut down all economic activity throughout the world.

The solar photovoltaic glass market is dominated by building and construction, which hold 32% market share. The need for solar photovoltaic glass for all types of buildings is anticipated to increase due to the expanding construction sector and its demand, notably in the areas of Asia-Pacific, North America, and Europe. Due to increased penetration from undeveloped markets, the residential application category is growing. In this application industry, first-mover advantage in unexplored regions and relatively cheap acquisition costs continue to be important driving drivers.

Additionally, R&D in solar photovoltaic glass will aid in the market's expansion. The ability for windows to produce energy is going to enter the architectural glazing industry. Solar cells built into glass window panels will make it possible to use the sun's energy to insulate buildings from the cold while controlling the interior light levels. In a similar vein, Tesla has shown its residential solar roof tile. The market for solar photovoltaic glass will grow as a result of technological advancements.

The solar photovoltaic glass market was headed by Asia-Pacific (APAC), which saw a share of around 44%, followed by North America and Europe. The building sector in APAC will likely remain one of the biggest and fastest expanding in the world. In the upcoming years, it is anticipated that large and established markets like China, India, Japan, and South Korea would expand more. China, followed by India and Japan, is the country driving the majority of the demand for solar photovoltaic glass in the Asia-Pacific area. All of the Asian nations, including China and India, which are important drivers of the demand for construction investment in these regions, make up the five fastest-growing construction regions outside of the United States. The increasing middle class and expanding population are factors that tend to fuel the development of the APAC residential building industry and, by extension, the solar photovoltaic glass market.

In the APAC area, the number of buildings using lighted solar photovoltaic glass is rapidly increasing. The market has been further boosted by the surge in rehabilitation projects and the number of new building builds. Currently, the COVID-19 epidemic has had an impact on the construction sector since the majority of industrial activity has been temporarily halted. In turn, this has had an impact on the demand and supply chain, which has been limiting growth in 2021.

By Grade of Transparency