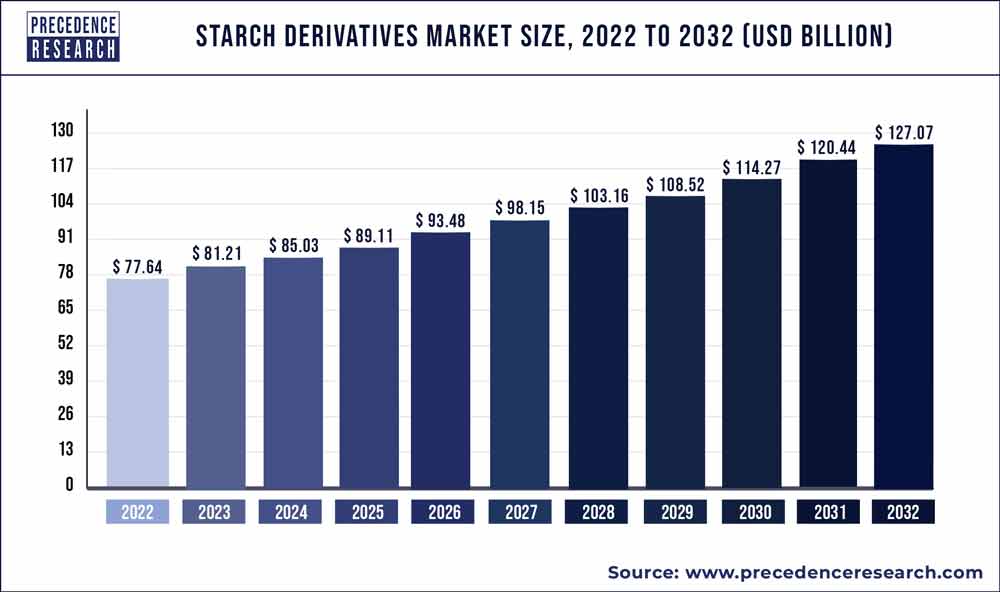 Starch derivatives, commonly referred to as modified starch, are draw up by modifying native starch by physical, enzymatic or chemical means. Different businesses employ derivatives of starch for a variety of purposes. They are employed in the food and beverage business as thickeners and stabilizers, in the pharmaceutical sector as a tablet binder, in the cosmetics sector as an emulsifier, and in the animal feed sector as a fiber additive. Other tasks performed by starch derivatives include improving flocculation, adhesiveness, film formation, pH stability, shear stability, acid stability, and process tolerance.

In the food business, starch derivatives are used as thickeners, emulsifiers, gelling agents, and film-forming additives, making up more than half of the market for starch derivatives. Additionally, the spectrum of applications for modified starches has significantly expanded due to their improved functioning. Starches' functional attributes play a crucial role in how well they operate in the marketplace.

A major factor driving the food industry and, in turn, the market for starch derivatives is the growing worldwide population and the rise in disposable personal income. It is a well-liked product in the pharmaceutical, paper, textile, and numerous other industries because to its low production costs, simplicity of processing, biodegradability, outstanding physiochemical qualities, and high calorific value. Market expansion is probably advantageous due to shifting customer preferences for a healthy appetite and growing consumer concerns about nutrition and health. Over the forecast period, penetration will rise due to the soaring demand for natural sweeteners in soft drinks and energy drinks without carbonation. Increased usage of the component in a variety of industries, including the production of biofuels, and glue, is projected to support market penetration.

Moreover, it is employed as a culture medium, as a bulking agent, a caking agent, a dehumidifier, and as a bulking agent in the chemical, agricultural, medical, and healthcare industries. Corrugated paper, surface sizer, layer binder, and gummed tape are all used in the paper and pulp industry as wet end additives. The textile industry uses it for printing, warp sizing, spray sizing, finishing, and glass fibers. Additionally, they are employed in dry cells, cement retardants, acid picking thickeners, ceramic fibers, and numerous other applications.

Due to cassava advantages in providing products to consumers as well as the flavor and sensory effects in food, cassava starch is changing quickly and pursuing a strong growth. Globally, consumers are growing more informed and concerned about their health, which is fueling demand for products that try to improve wellbeing, lengthen lifespans, and fend off the onset of chronic illnesses. The global market for nutritional foods is being stimulated by foods fortified with health-promoting and disease-preventing characteristics. The producers have been forced to introduce and innovate new functional foods and drinks in the worldwide market place due to the changing consumer food eating behaviors and their shifting taste preferences.

Depending upon the type, glucose syrup segment dominated the starch derivatives market during the forecast period. Due to increased demand for ice cream, desserts, bakery goods, processed meats, and sauces, the market is anticipated to grow significantly throughout the forecast period. Demand is anticipated to be driven by rising glucose consumption in non-food applications such as plywood, adhesives, textiles, paper, and pharmaceuticals. It also improves flavor, adds volume, improves texture, and prevents the crystallization of sugar in drinks.

The maltodextrin segment holds a significant share in the starch derivatives market. As a result of expanding use across numerous industries, including food, pharmaceuticals, cosmetics, textile, paper, construction, paints and coatings, maltodextrin is anticipated to increase at a high rate over the forecast period. Due to its low cost, maltodextrin will see an increase in demand as a thickening and filler in processed foods, which will drive industrial growth. Over the next years, growth will be boosted by the rising demand for baby and infant food.

In both the food and cosmetic industries, cyclodextrins are often applied. In the food business, they are used as food additives to stabilize flavors, eliminate unwanted smells or odors, and stop browning reactions and microbial contaminations. Due to their anti-oxidation, anti-heat, and anti-light properties, cyclodextrins are also utilized in the cosmetics sector. Due to their ability to lessen skin inflammation and itch, they are frequently utilized in skin care products.

During the projected period, the food & beverages segment is anticipated to be the largest in the starch derivatives market. For a considerable amount of time, starch derivatives have been created, and the food and beverage sector is beginning to place more emphasis on their uses. Considering their functional qualities, they are utilized in many food applications. As a binding and gelling agent, starch derivatives have emerged as a crucially successful environmentally friendly product. Due to rising sugar values, there has been a noticeable increase in the need for starch across the food and beverage industry.

Pharmaceutical segment is anticipated to grow significantly during the forecast period as a result of increasing disposable income and advancements in healthcare infrastructure. Additionally, it is expected that during the course of the forecast, the pharmaceutical industries in China, India, and the U.S. will all increase significantly. Additionally, starch is frequently utilized in the cosmetics sector for a variety of goods, including creams, shaving gels, lotions, bath treatments, and body powders. The market for starch derivatives is anticipated to increase due to rising interest in using natural cosmetics products.

The highest market share and dominant position in the starch derivatives industry belongs to Asia-Pacific during the forecast period. This region includes China, India, Japan, South Korea, and rest of the world. The primary drivers driving the uses of starch derivatives in the region are the growth in functional food products, clean label demand, and attaining cost reduction in the production process in Asian-Pacific countries, particularly China, India, and Bangladesh. The factor that has led to a rise in the number of food and beverage processing businesses using modified starch is the paradigm change in consumer preferences toward low-calorie food items. This is necessary to address the rising demand for functional/low-calorie food products. As a result, the market value of starch derivatives in the nation increased. Such reasons made it possible for ingredient makers to create goods that may help food businesses meet the expanding demand.

Europe is considered as second largest region in the consumption of starch derivatives products. This region includes UK, Germany, and France. The region's expanding use of starch derivatives in the food and beverage industries is the main factor driving the market. Additionally, because they are imported from other nations, the price of starch derivatives is anticipated to increase. Parallel to the food industry's quick development, there is a rising demand for modified starches. Modified starches have a huge range of functional advantages for a wide range of foods, including baked goods, beverages, snacks as well as nutritive foods.

Due to the widespread availability of corn, which has a wide range of applications in food, non-food, and feed, North America held significant position in the market for starch derivatives. Starch and its derivatives are in high demand for a variety of uses in both the food and non-food industries, particularly in developed nations like the United States, Canada, and Mexico. This is due to increased adoption of and understanding of the functions of starch derivatives.

A prospective market for starch and starch derivatives is developing in the Middle East as a result of rapidly shifting demography and increased consumer demand for wholesome and practical food items. With its extensive cassava industry, Africa stands a good chance of becoming self-sufficient in the production of both native and modified starches. The sweeteners business is anticipated to have the highest demand.

Segments are covered in the report: