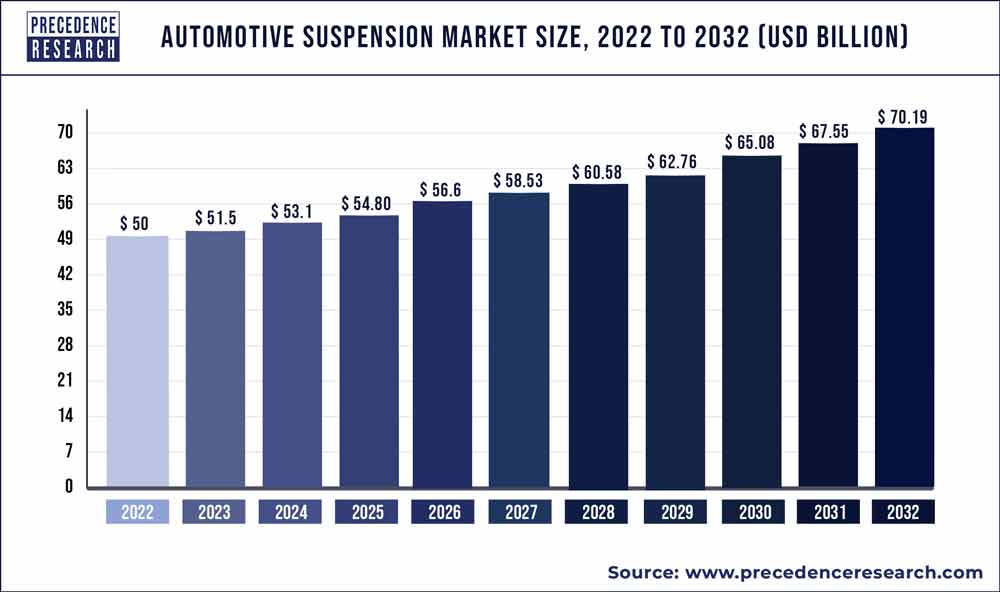 The mechanism of two adjoining parts or gears in a vehicle or locomotive, regardless of proportions and size, is known as automotive suspension. The automotive suspension systems come in a variety of shapes and sizes, including tire air and springs. It is a shock absorption process that includes the relative motion of both wheels and shock absorbers between the locative and the surface on which the machine is functioning. The main objective of an automotive suspension is to minimize discomfort and exertion in the face of adversity.

The passengers will be more comfortable, cargo will be less damaged, and driver tiredness will be reduced on lengthy trips if the rise is of high quality. The suspension is in charge of ride quality and automobile handling control, since vehicles with firm suspension may have better body control and quicker reactions. As a result of these aforementioned factors, the demand for enhanced driving comfort has increased, favorably impacting the global automotive suspension market’s growth during the forecast period.

As the suspension system connects the wheel to the vehicle chassis and is one of the most important sections of a vehicle, demand for it is directly tied to new vehicle production. The automotive business is growing as a result of rising urbanization, technological improvements, and changing consumer preferences. The significant expenditures are being made to update existing vehicle suspension systems in order to improve ride quality and road holding capabilities. Although the automotive suspension market is growing steadily, the lack of standardization and high prices of independent suspension systems may function as a major hurdle to the market’s expansion.

Due to its performance in both on and off-road conditions, the independent automotive suspension will grow at a rapid pace during the projected period. Each wheel acts as a separate suspension unit in this type of suspension, and movement of one wheel is not dependent on the movement of the other. Each wheel in this suspension reacts to the road differently. These systems provide good wheel bonding. However, the suspensions’ complex construction and high repair costs may limit their adoption.

During the projection period, a growing population, rising disposable incomes, and shifting consumer dynamics would result in a massive demand for two-wheelers. In order to increase their bottom line, many prominent two-wheeler companies are using targeted product launch strategies. In the near future, greater customer affordability combined with increased competitiveness would raise two-wheeler output, resulting in the automotive suspension market growth during the forecast period.

Scope of the Automotive Suspension Market

Based on the region, the Asia-Pacific segment dominated the global automotive suspension market in 2020, in terms of revenue and is estimated to hit 4.5% of CAGR during the forecast period. Due to changing consumer preferences, the rising per capita income, and the cost benefits for original equipment manufacturers (OEMs), the Asia-Pacific has emerged as a center for automobile production in recent years. The compact and cost-effective automobiles are popular among consumers in the region.

The Europe is estimated to be the most opportunistic segment during the forecast period. The Europe region is the world’s largest producer of automotive suspension, and this is projected to continue in the coming years. It is the world’s leading manufacturer of fuel-efficient vehicles. However, as demand for premium vehicle grows, the original equipment manufacturers (OEMs) have begun to invest in and develop innovative automotive technologies.

To build a firm presence in the automotive suspension market, the key market players are employing several methods such as increasing production capacity, diversifying sales and distribution networks, product differentiation and new product development, and strategic partnerships and collaborations.

Some of the prominent players in the global automotive suspension market include: