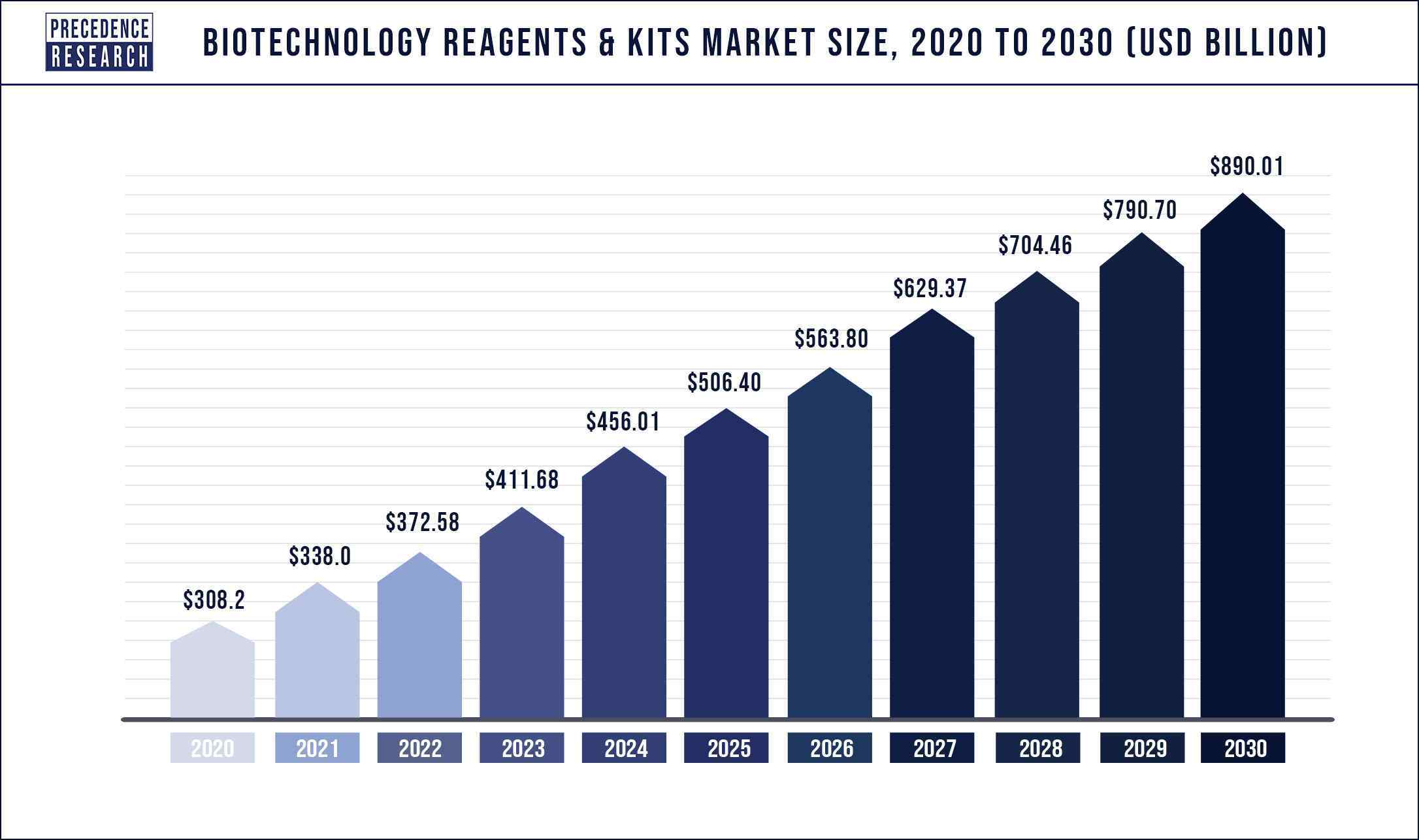 The global biotechnology reagents & kits market is primarily driven by the rapid developments in the biotechnology industry, increasing investments in the research & development by the biotechnology companies, increasing demand for the technological advancements in the biotechnology field, and growing biomolecular applications. High investments in the molecular biology has increased the consumption of the biotechnology reagents and kits in the recent years. The recent outbreak of the COVID-19 pandemic had a significant and positive impact on the market. COVID-19 had resulted in the increased usage of the RT PCR assay, as it is widely used for detecting the viral RNAs in the patients. Moreover, isolation of nucleic acids is an essential part of the COVID testing workflow. The lockdown situation resulted in the shortage of the purification kits and nucleic acid isolation. Several biotechnology companies started expanding its production capabilities, engaged in new product launches, and enhanced their distribution systems in order to tackle the shortage in supply and strengthen their positions in the market. Furthermore, the developments in the field of genome engineering, big data analytics, and gene therapy has positively contributed to the market growth in the past few years.

Report Scope of the Biotechnology Reagents and Kits Market

Based on technology, the cell culture segment accounted for around 25% of the market share in 2020 and is estimated to sustain its dominance during the forecast period. This can be attributed to the increased demand for the cell culture reagents among the researchers. The rapidly growing research activities owing to the increasing investments in the R&D is supplementing the market growth. The cell culture segment was closely followed by the PCR segment. PCR is one of the most important technologies used for analyzing and detecting particular gene sequence. The RT PCR has gained rapid traction owing to its accuracy, time-saving, and higher sensitivity characteristics, which made it very popular for the COVID-19 testing.

On the other hand, the sequencing segment is estimated to be the fastest-growing segment during the forecast period. It is considered to be the most reliable technology for cell lines categorization and is extensively used in the production of vaccines, gene therapies, and proteins. The rising advancements in the sequencing field is expected to drive the market growth in the forthcoming years.

Based on micro-organisms, the virus segment accounted for over 30% of the market share in 2020 and is estimated to sustain its dominance during the forecast period. The growing applications of the viruses in the development of vaccines and gene therapies has boosted its demand and resulted in the dominance of this segment. The rising investments and research activities in the development of gene therapies and vaccines is expected to further fuel the growth of this segment.

On the other hand, the bacteria is estimated to be the most opportunistic segment owing to the growing usage of bacteria in cancer treatment. Bacteria can be potentially used as an anti-cancer agents. Therefore, the rising prevalence of cancer among the global population is expected to drive the growth of this segment. According to the International Agency for Research on Cancer, around 19.3 million new cancer cases and around 10 million cancer related deaths were reported in the year 2020, across the globe.

Based on tested parameters, the RNA segment accounted for around 30% of the market share in 2020 and is estimated to sustain its dominance during the forecast period. In the past few years, the investments and the activities related to the extracellular RNA has gained rapid surge for the clinical diagnosis. The various research organizations and universities are increasingly engaged into the development of RNA based therapeutics, which is expected to further drive the growth of this segment in the foreseeable future.

On the other hand, the DNA segment is anticipated to grow at a rapid pace during the forecast period. This can be attributed to the growing applications of DNA in the pharmacogenomics, drug metabolism, forensics, and genetic screening. The demand for the DNA diagnostics is growing rapidly, which is expected to drive the growth of this segment.

Based on end use, the healthcare segment accounted for around 52% of the market share in 2020 and is estimated to sustain its dominance during the forecast period. This can be simply attributed to the increased demand for the biotechnology reagents and kits in the numerous research organizations for the clinical trials and diagnostics. Further, the rising popularity of the personalized medicines among the population is further fueling the segment growth. 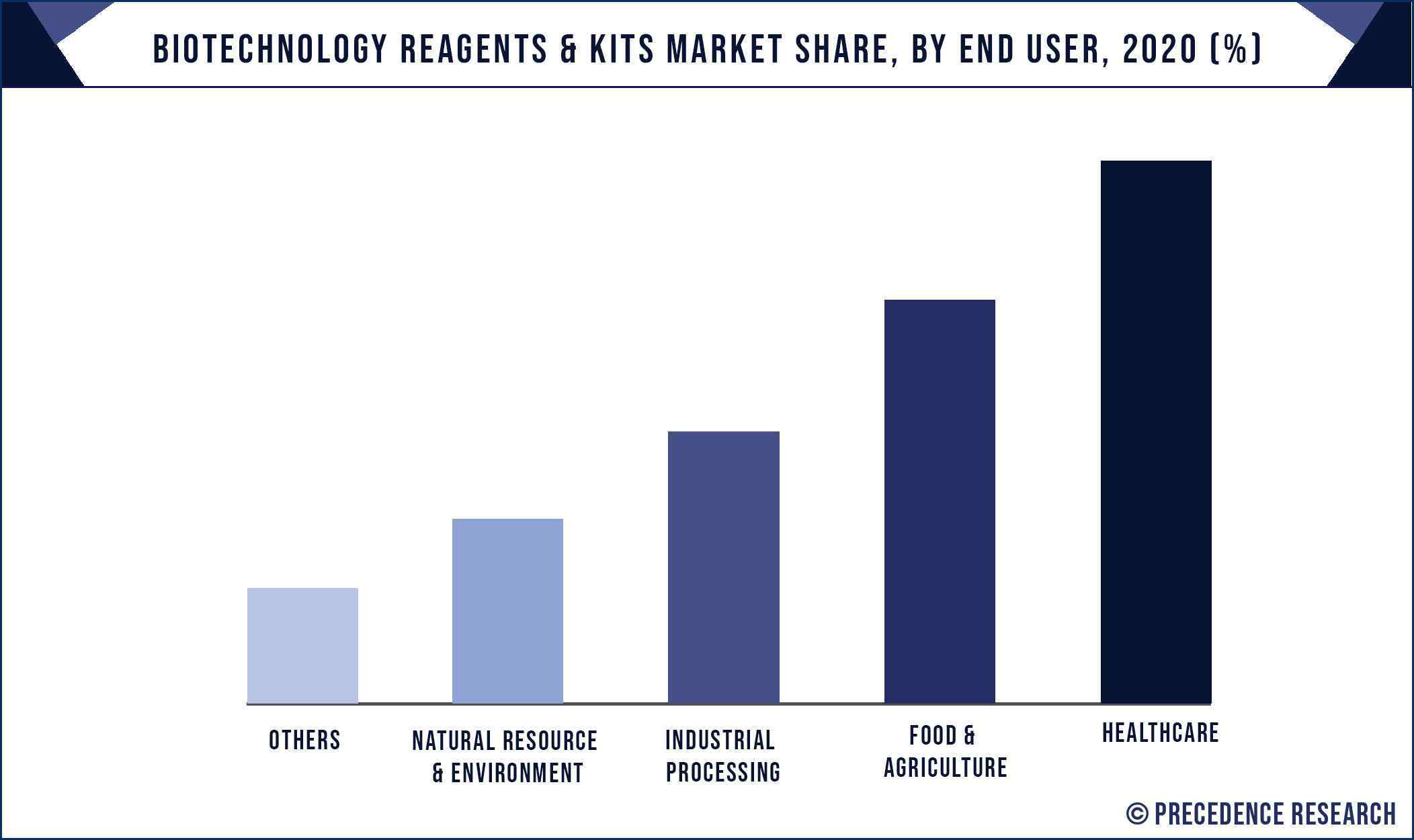 On the other hand, the food & agriculture segment is estimated to be the most opportunistic segment during the forecast period. This is attributed to the increased activities in the biotechnology sectors towards the development of various recombinant DNA technology and plant tissue culture technology for improving the yield in the agricultural sectors.

The Asia Pacific is expected to witness remarkable CAGR during the forecast period. The rising prevalence of chronic diseases among the population, increased government initiatives to develop the healthcare infrastructure, and growing demand for the advanced therapeutics are the various factors that propels the growth of the biotechnology reagents & kits market in the Asia Pacific region.

In December 2020, Stilla Technologies introduced naica multiplex PCR MIX and naica PCR MIX. These are ready to use solutions that offers enhanced performance in applications of digital PCR.

Some of the prominent players in the global biotechnology reagents & kits market include: