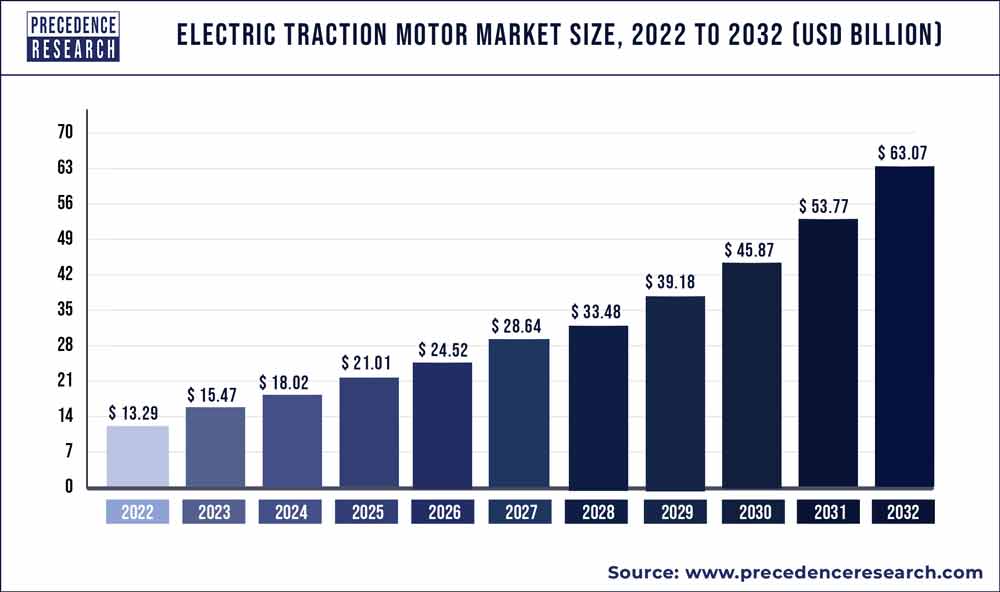 The rising investments in electric vehicles and rising demand for energy-efficient motors are driving the market growth. Due to the low power consumption and great efficiency of EV traction motors, EV sales are on the rise. Furthermore, the demand for EVs is being driven by strict environmental laws and emission standards to protect environmental sustainability, generating ideal conditions for market growth.

Global sales of hybrid electric vehicles (HEVs) have surged as a result of a growing public preference for zero-emission automobiles. Consequently, it is anticipated that the market would benefit from the increased production of HEVs. Additionally, the government is launching a number of programmes to increase the sales of EVs, such as tax breaks and discounts, which is propelling the EV traction motor market.

Vehicles with traction motors are entirely hybrid and battery electric (BEVs). By offering almost zero emissions and exceptional fuel efficiency at ever-lower prices, BEVs and HEVs have been quickly gaining acceptance in the worldwide automotive industry. Globally, a large number of vehicle OEMs are currently developing innovative HEV and EV concepts. Additionally, avoiding electrical and magnetic losses is crucial if users are to receive the optimum range and fuel economy.

Additionally, structural, thermal, and electromagnetic concerns that are essential to vehicle performance, dependability, and cost must be taken into account by engineers during installation. Compared to conventional motors, traction motors for electric vehicles often operate more quietly and accelerate more quickly. Additionally, unlike conventional cars, electric vehicles traction does not require a multi-speed transmission since, in contrast to reciprocating engines, electric motors have a more advantageous torque-speed connection that allows them to deliver the most torque even at the lowest speed. Additionally, scientific developments in fields like nanotechnology and material science are concentrated on lowering cost and weight while extending the lifespan and functionality of traction motors, making EVs more accessible.

Motor failure is a major limitation: A machine's or technology's motor is a crucial component. The traction motor's difficulties have a significant negative impact on demand as a whole. To address this problem, the major market participants are increasing their R&D spending. The market demand and market development, however, will be greatly impacted by engine overheating and failure.

A battery-powered vehicle is one that runs entirely on chemical energy from rechargeable battery packs. Instead of using traditional IC engines for propulsion, battery electric vehicles employ motor controllers and electric motors. Due to a significant shift in consumer attitude toward zero emission vehicles, the BEV category is anticipated to dominate the market for electric vehicle traction motors throughout the forecast period. The BEV market is anticipated to rise as a result of technological developments including long-range batteries with quick charging capabilities. To enable EVs to go up to 200 miles on a single charge, the market is heading toward battery capacities of 60kWh. The higher battery capacity is anticipated to positively affect the market for electric vehicle traction motors by cascading the demand for battery electric vehicles. Greater government involvement also has a significant impact on encouraging people to purchase BEVs.

During the anticipated period, the AC segment is anticipated to be the market's biggest by type for electric traction motors. The benefits of AC motors include ease of manufacture as they don't require any mechanical parts to work, as well as being lighter than DC motors for the same power. Utilizing cutting-edge electronics enables the AC units to work meticulously and effectively to increase traction and adhesion. 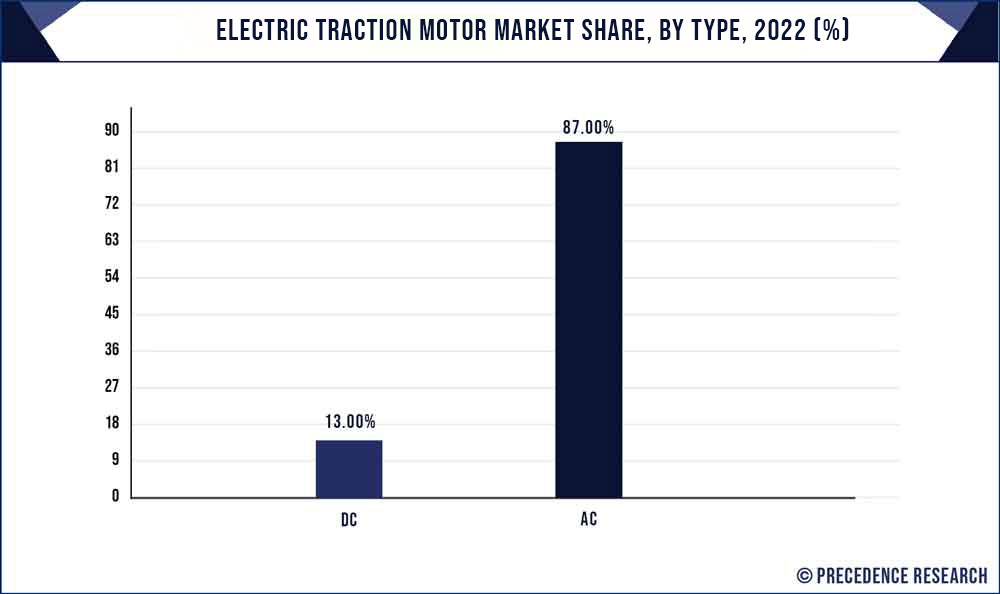 It can be precisely monitored by microprocessors, which also aids in redeveloping current till it stops. At low speeds, DC regeneration falls rapidly. In the current industrial area, these items are most frequently employed in a variety of applications, including electric cars, conveyors, and industrial gear. In the automotive industry, AC motors are used more frequently. These are the elements that are anticipated to boost demand for AC motors.

The market for EV traction motors in Asia Pacific became the biggest in 2021 and is predicted to develop at the quickest rate over the forecast period. Industry leaders in the area blame the growth of industrial facilities for this. Due to the cheap access to labour and raw materials in China, the largest industrial facilities have been seen to start operating there. Over the past ten years, the Chinese government has invested more than $50 billion in the establishment of factories producing electric vehicles and their components. To increase the demand for EVs, the Chinese government has also decreased the number of conventional car licenses accessible. Over the projection period, North America is anticipated to experience a significant CAGR of over 35%. In terms of the sales of EV traction motors, it is likewise a significant region. The existence of reputable electric car manufacturers accounts for the region's greater proportion. However, in 2018, Europe had a market share of over 20%. Over the projected period, rising BEV demand is anticipated to fuel market expansion in the area.