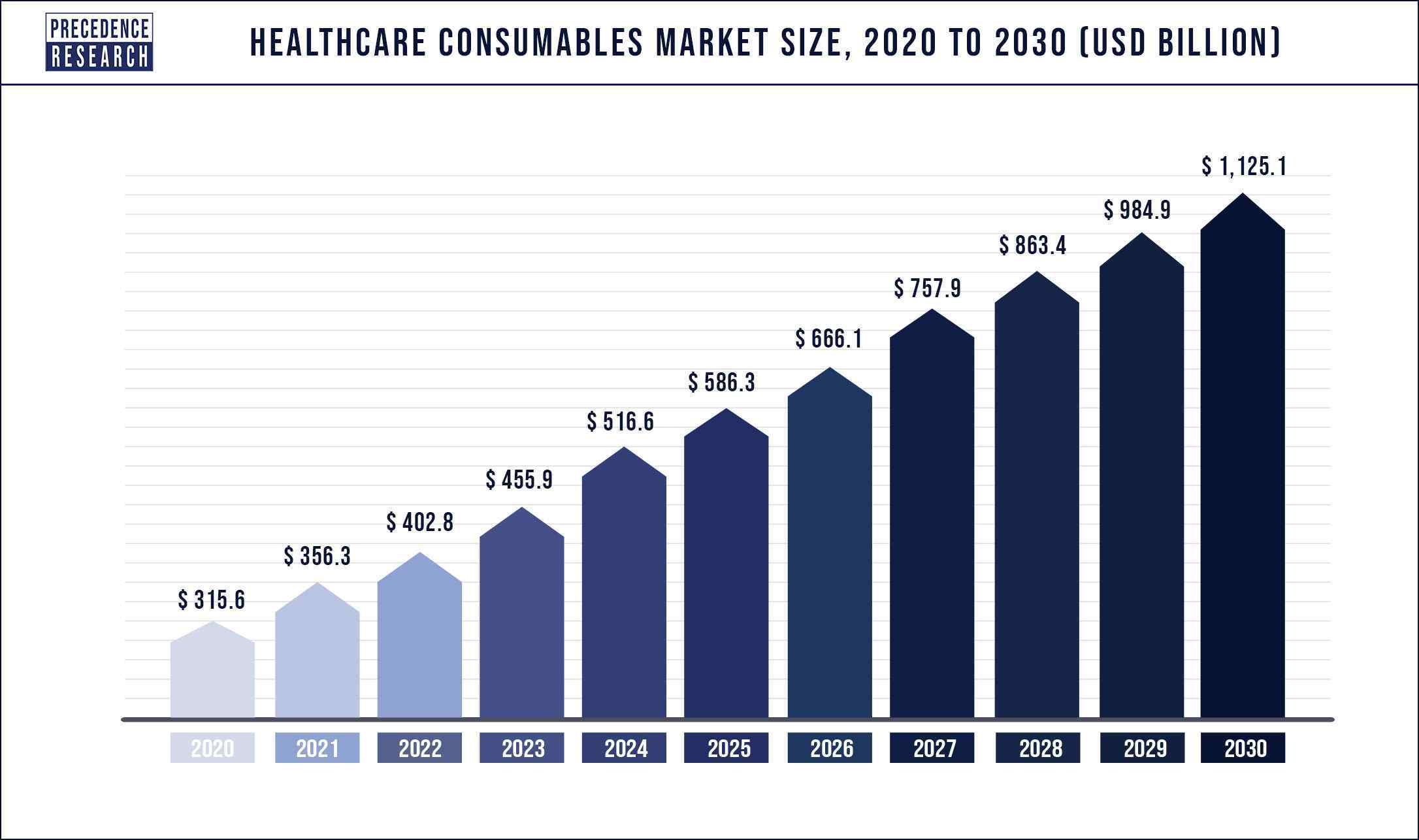 The global healthcare consumables market is primarily driven by the increased number of hospitals admissions owing to various reasons like the rising prevalence of chronic diseases, increasing the number of road traffic accidents, and increased adoption of surgical procedures for treatment among the population. Moreover, the rising number of hospital acquired diseases and growing awareness regarding this is boosting the consumption of healthcare consumables. In the year 2020, the demand for healthcare consumables witnessed a rapid surge owing to the rapid spread of the COVID-19 disease across the globe and increased number of hospital admissions. The government in most of the countries encouraged the increased the production of consumable such as face shields, face masks, disposable gloves, and hospital gowns. This resulted in the increased revenue in 2020. The demand for the personal protective equipment increased exponentially across the globe to prevent the COVID-19 infection.

The rising prevalence of various chronic diseases like CVDs, COPD, and diabetes is a significant contributor to the healthcare consumables market growth. According to the International Diabetes Federation, the global diabetic population is estimated to reach at around 552 million by 2030. According to the WHO, diabetes is a major reason for kidney failure, blindness, stroke, and diabetic foot ulcer. This results in prolonged hospital stays. The rising the geriatric population across the globe is expected to drive the growth of the market, as old age people as more prone to various diseases and they need utmost attention and continuous monitoring, which may fuel the demand for the healthcare consumables. According to the WHO, the global geriatric population is anticipated to reach 2 billion by 2050. Moreover, the rising demand for the various invasive and minimally-invasive surgeries for the treatment is positively impacting the growth of the global healthcare consumables market.

On the other hand, the hands sanitizer is estimated to be the most opportunistic segment during the forecast period. This can be attributed to the rising awareness regarding the various infections through hand. The increased burden of fungal and bacterial infections is boosting the growth of this segment. Moreover, the rising awareness regarding the hospital acquired infections is expected to boost the demand for the hands sanitizer during the forecast period.

Based on the raw materials, the plastic resin segment accounted for around 59% of the market share in 2020. This is simply attributed to the increased utilization of the plastic resins in the production of wide range of healthcare consumables such as syringes, tubes, packaging materials, and containers for medical purposes. Moreover, the low cost, durability, and availability of different plastics such as PP, PVC, and polystyrene has exponentially created the growth opportunities in the healthcare industry.

Based on the end user, the hospitals segment accounted for around 55% of the market share in 2020. This is attributed to the increased penetration of hospitals across the globe coupled with the rising number of hospital admissions. The growing demand for the surgeries owing to the technological advancements in the therapeutics and surgical equipment has boosted the growth of the market.

On the other hand, the homecare is estimated to be the fastest-growing market during the forecast period. The increased awareness regarding the hospital acquired infections, growing geriatric population, increased disposable income, and conveniences associated with the homecare treatment is resulting in the increased popularity of the homecare segment.

Based on region, North America accounted for over 33% of the market share in 2020. North America is characterized by the increased healthcare expenditure, rising awareness regarding minimally-invasive surgeries, presence of strong healthcare infrastructure, and increased penetration of healthcare units. Moreover, rising number of hospital admissions is boosting the market growth. As per the data revealed by the CDC, there were around 45 million outpatient surgeries, more than 900 million physician visits, and 155 million emergency department visits in US, in 2019.

On the other hand, Asia Pacific is estimated to be the most opportunistic market during the forecast period. Asia Pacific is projected to witness huge presence of the geriatric population in the upcoming future. According to WHO, 80% of the global geriatric population is expected to be living in the low and middle-income countries, by 2050. Moreover, the rising penetration of hospitals, ambulatory services, clinic, and diagnostic labs in the region is boosting the market growth.

Some of the prominent players in the global healthcare consumables market include: