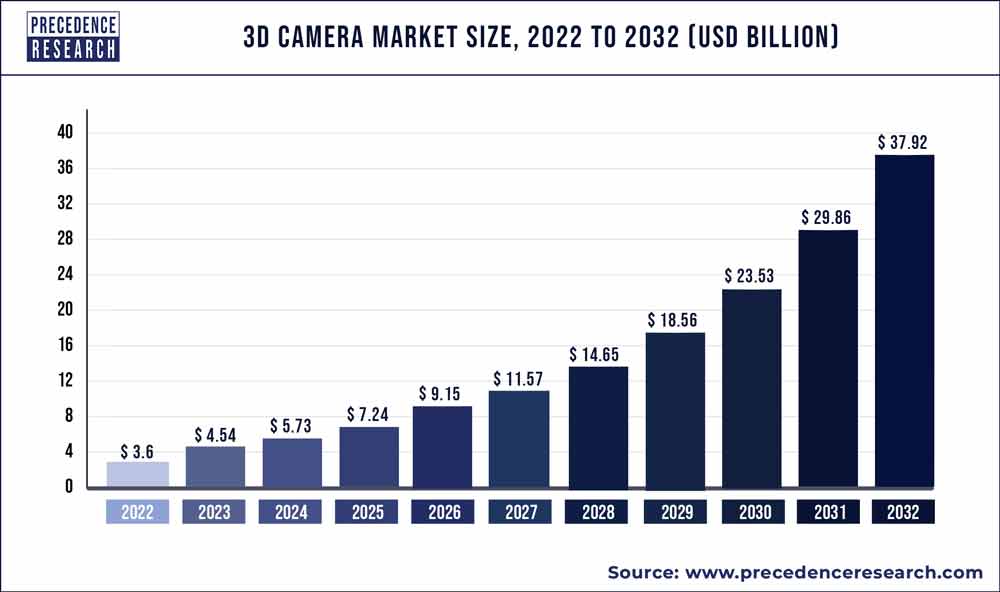 A 3D camera is a type of imaging technology that gives images the appearance of depth to mimic three-dimensional perspectives as perceived by human binocular vision. A single lens that changes position is used by some 3D cameras, while others employ two or more lenses to record different points of view.

The parallax effect is produced by combining the pictures from the two lenses to produce the 3D effect. When looking at an object across two lines of sight, parallax happens. When volumes, forms, and 3D positions and orientations of objects are needed, 3D image processing is quite helpful. It is a depth-sensing innovation that improves camera functionality for object and facial recognition. Utilizing optical technology, 3D sensing technology imitates human vision, enabling the development and integration of augmented reality, artificial intelligence (AI), and the Internet of Things (IoT). This gives consumer applications new opportunities.

As some target objects required a micrometer level of point precision along with depth information, the need for 3D cameras started to rise. Additionally, 3D technology makes it possible for users to control tough situations with poor or excessive illumination as well as elements like sparkling parts. Similar to how the human eye sees, this is used to determine an object's size, color, and distance between two locations. According to estimates, the need for 3D cameras will increase as smartphone cameras continue to advance. The 3D camera market is anticipated to grow quickly in the near future as a result of trends in artificial intelligence, augmented reality, smart devices, and 3D printing.

On the basis of technology, the time-of-flight segment has held the highest revenue share in 2021. This is because the technology is widely used in a variety of applications, including smartphones, drones, healthcare, industrial, and automotive. In addition to being resistant to ambient time, the system only considers one viewpoint while calculating depth, which makes it immune to occlusions and shadows while preserving sharp depth borders. As a result, maintaining safety through the recognition of moments and gestures and the provision of real-time information is most desired in the automotive and industrial sectors. 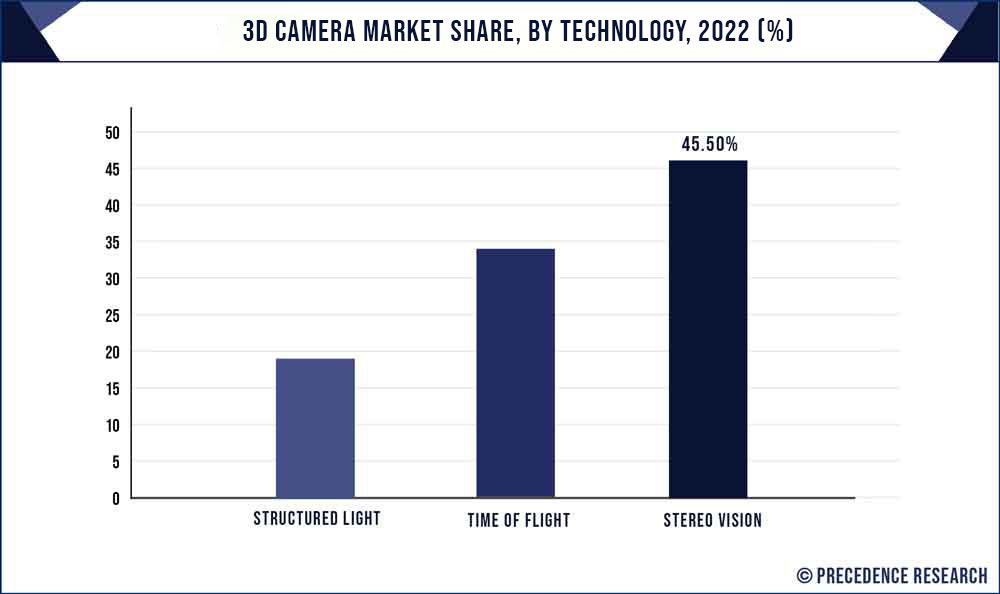 Over the forecast period, stereo vision is expected to maintain its position in 3D cameras. Over the anticipated time frame, the market is expected to grow at a CAGR of 36%. These technologically advanced cameras are inexpensive and simple to design.

On the basis of application, the professional camera segment is expected to have the largest market share in the coming years period, the segment has dominated the market and it will continue to grow well in terms of revenue. As the market for 3D movies expands, more professional 3D cameras are anticipated to be used to record live-action movies. Stereo cameras are used to capture motion pictures. Professional 3D cameras are preferred over pricey computer-generated imagery (CGI) to save time and money. The market for 3D cameras is primarily driven by the increased use of these cameras to record 3D content in media and entertainment. The rising use of expert 3D cameras in sectors including manufacturing, building, civil infrastructure, and historical site management is another development driver for the sector.

Over the projected period, it is anticipated that the sector for smartphones and tablets will expand the fastest. The increase is anticipated to be driven by the rising demand for sophisticated cameras equipped with cutting-edge technologies that improve picture and video quality by detecting motions. Among youthful consumers, features like high performance, HD clarity, and real-time sensing are becoming more popular.

On the basis of geography, Asia Pacific accounted highest revenue share in 2021. Due to the significant smartphone sector in the region, which is expected to be a target industry for 3D cameras over the projection period, Asia Pacific is a very lucrative region of the worldwide market. The growth of the region's construction, automotive, and healthcare industries is having a big positive impact on the market for 3D cameras. In 2021, the market for 3D cameras saw the biggest revenue share in the Asia Pacific region. This is because more people are using smartphones, the entertainment sector is expanding, there is more money available, and fewer people possess cameras. Additionally, the growth of the regional market would be further boosted by the development of the industrial sector in the region's developing countries.

A significant portion of the global market for 3D cameras is projected to come from North America due to the region's rapid adoption of technologies that are increasing the demand for 3D cameras. 3D cameras are widely used in the region in the fields of construction, surveying, surveillance, indoor mapping, entertainment, and sports.

In March 2021 – A cooperation between Microsoft, an American multinational technology company, and LG Innotek was formed. This alliance used LG Innotek's ToF technology based on the 3D camera component and Microsoft's Azure Depth Platform to open up access to 3D vision technology and release innovation across a variety of industries, including healthcare, fitness, retail, and logistics. Cloud-connected cameras can also optimize and look into production lines in industries to prevent mishaps.