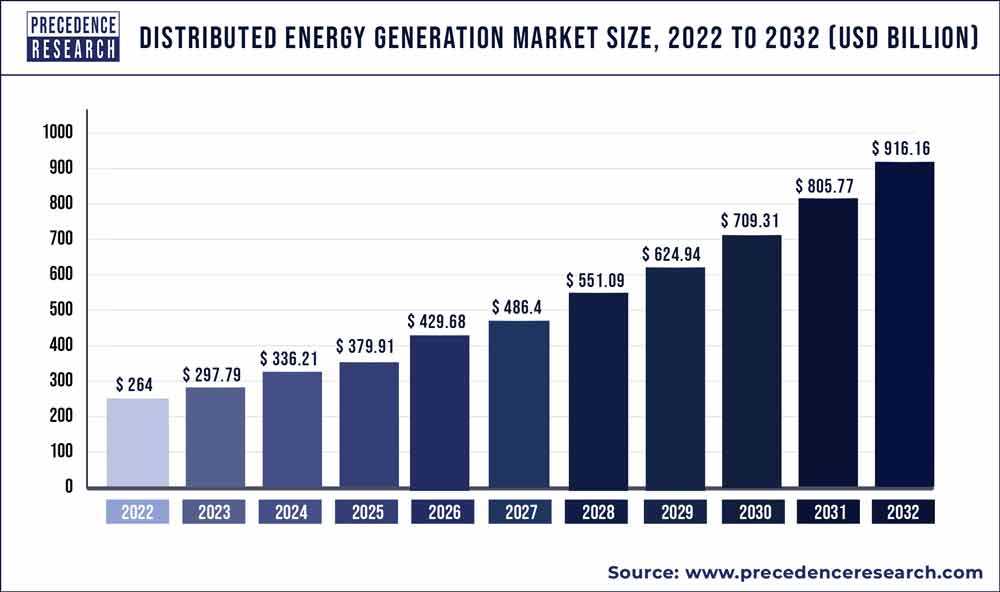 Electricity demand is expanding at a rapid rate around the world, since it has become an essential requirement of modern life. To meet the rising demand, a shift has occurred toward the use of renewable energy sources for electricity generation. And, because renewable energy generation is backed by the government’s aggressive green energy targets, it has become a big attraction for investors.

Distributed energy generation systems are utilized to provide a small-scale power generation alternative or complement to the regular electric power infrastructure. Renewable and non-renewable energy sources can be used to generate distributed energy.

Energy can be generated from a variety of sources, such as wind, sun, reciprocating engines, turbines, biomass, and so on, due to distributed generation. Another benefit of distributed generation it’s that it allows for energy generation in remote places while avoiding the need for long-distance electricity transmission lines. Microgrids collect energy from a variety of sources, using only what is needed and transferring the rest to the grid. In the event of off-grid devices, the remaining energy can be stored in batteries for later use.

The distributed energy generation market is being driven by increased environmental consciousness, rising government laws and greenhouse gas emission reduction goals, and expanding energy consumption. Increased research and development initiatives for the development of new technologies are also expected to drive market expansion. The demand for distributed energy generation systems is expected to be stimulated by government schemes and incentives, such as feed-in tariffs in North America and Asia Pacific. The installation of such systems in industrial, residential, and commercial contexts is being encouraged by government programs.

The rising environmental concerns and government policies that provide incentives and tax benefits for solar panel installation, as well as the prohibitive cost of grid expansion, are projected to be important market drivers. In addition, technological advancements that have resulted in lower solar panel manufacturing costs and increased efficiency have been crucial contributors in the expansion of the distributed energy generation market. However, in the Asia-Pacific area, a lack of popular understanding and interest in the technology has impeded market expansion.

The manufacturers across Europe have been forced to align their efforts toward sustainable energy installations due to rigorous energy efficiency standards. The leading market companies, for example, are producing green transformers and micro grid infrastructure, which has had a favorable impact on the business environment, The current electrification regime, along with an increasing focus on decentralized energy generation, will bolster the market for distributed power generation.

The countries like the UK, the U.S., Japan, Germany, and China are among the major investors in fuel cell technology and advancements. The majority of global research and development activities are focused on the development and advancement of fuel cell-powered vehicles, which will create opportunities in the fuel cell market. However, research and development activities for utilities and unmanned aerial vehicles (UAVs) for the defense sector, as well as portable power generation units, have increased significantly in recent years. The increased emphasis placed by governments around the world on the use of clean energy sources has resulted in an increase in overall investments in generating electricity using fuel cells. As a result, the increase in investments boosts the current and near-term growth of the advances in the distributed energy generation market.

A large amount of land is required for utility-scale solar power-producing installations to be efficient. Many factors such as the availability of solar radiation, can limit the selection of land of solar power generation. Due to the amount of land occupied by the power plant, solar systems installed on a big scale might have an influence on natural regions and biodiversity. As a result, land use is constraining the growth of the distributed energy generation market during the forecast period.

Opportunities: Rise in number of off grid areas

The grid-connected electricity is scarce or non-existent in off-grid places. Secondary energy sources such as solar energy are used in these locations. There are substantial off-grid areas in almost every region of the world that do not have access to grid-connected energy. As a result, the rise in a number of off-grid areas across the globe is creating lucrative opportunities for the growth of the distributed energy generation market.

According to the International Energy Agency (IEA), renewables will have the fastest growth rate in the electricity sector, meeting approximately 30% of total power demand by 2023, up from 24% in 2017. Renewables are expected to account for 70% of global electricity generation growth during this period, led by solar PV, followed by wind, hydropower, and bioenergy, in that order. In 2017, global power sector investment in renewable energy generation totaled USD 750 billion. As these technologies gain traction for power generation, the use of batteries for off-grid and grid energy storage has increased, aided by battery cost reductions. All of these factors, pose major challenges for key players in the market for advances in distributed energy generation.

Based on the technology, the fuel cells segment dominated the globally distributed energy generation market in 2021, in terms of revenue and is estimated to sustain its dominance during the forecast period. Fuel cells have a number of advantages over other technologies. Fuel cells have higher efficiencies, convert chemical energy into fuel, and have lower emissions. They can achieve efficiencies of up to 50% and have lower emissions.

On the other hand, the solar PV segment is estimated to be the most opportunistic segment during the forecast period. PV modules composed of semiconductor materials are exposed to sun rays, resulting in the generation of an electrical current in this technology.

Based on the end-use industry, the commercial segment dominated the market in 2021, in terms of revenue and is estimated to sustain its dominance during the forecast period. Renewable technologies promise superior efficiency, pollution reduction, and robustness than traditional electricity production methods, and governments around the world are developing legislation to boost their implementation in these applications.

On the other hand, the industrial segment is estimated to be the most opportunistic segment during the forecast period. The demand for distributed energy generation systems in industries is expected to be driven by the increasing adoption of solar photovoltaic units for power generation due to their ability to offer quality and clean power.

Based on the region, the North America segment dominated the globally distributed energy generation market in 2021, in terms of revenue and is estimated to sustain its dominance during the forecast period. In the North America regional market, the wind turbine has the largest market share. Solar PV, on the other hand, is the fastest-growing segment, because of falling costs, a larger global distribution of solar lease products, and third-party ownership parties.

On the other hand, the Asia-Pacific is estimated to be the most opportunistic segment during the forecast period. The increased need for energy, combined with rapid urbanization in countries such as Japan, India, and China is expected to drive the distributed energy generation market expansion. The Asia-Pacific market is likely to be driven by rising disposable income levels.

Some of the Prominent Players

By End Use Industry