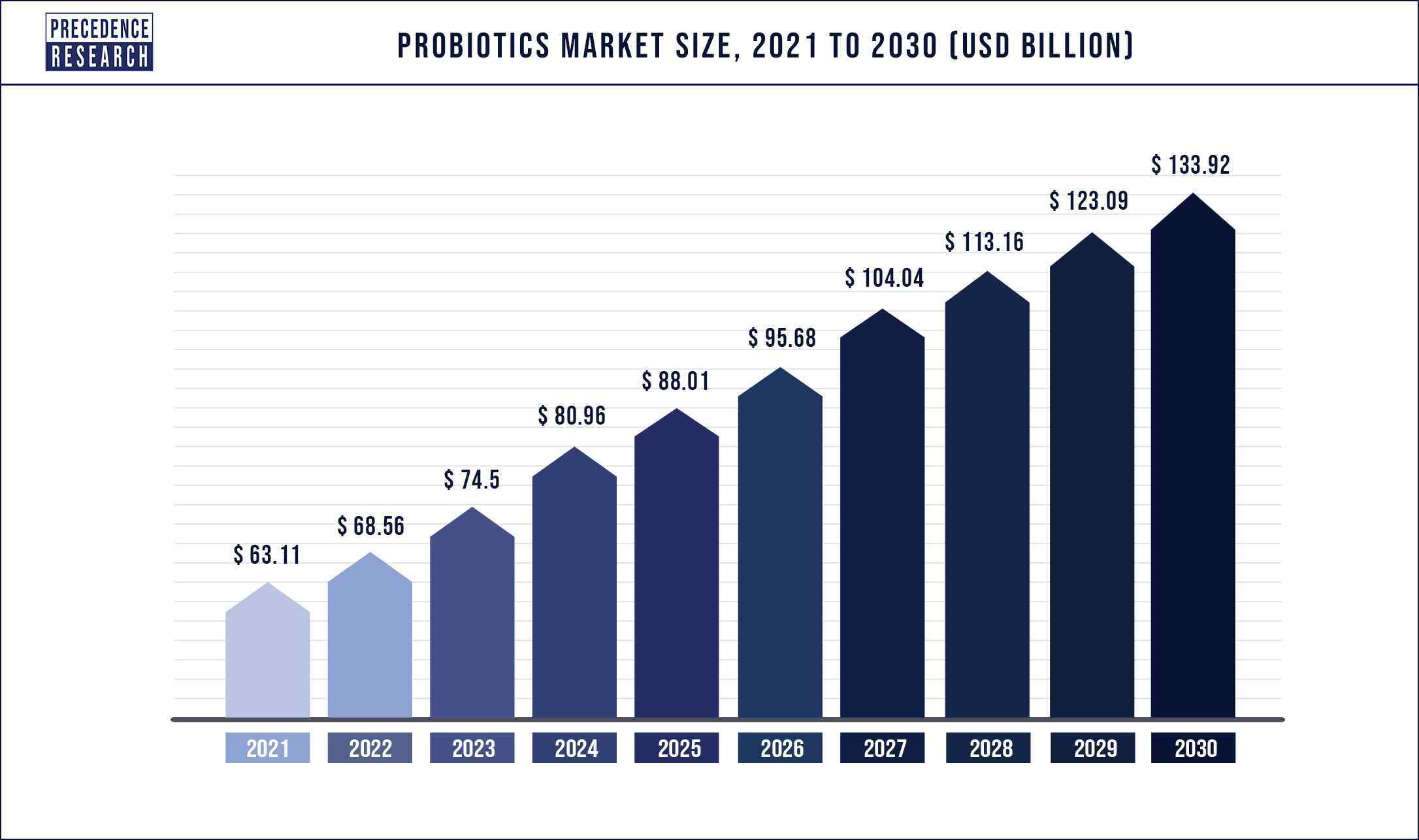 The market is augmented by the growing consumer inclination towards preventative healthcare in confluence with the development of effective probiotic strains. Probiotics, when consumed in acceptable quantities, provides various benefits to the body, such as improvised gut health and reduced intestinal inflammation. Probiotics plays anessential part in preventative healthcare as they aids the occurrence of diseases by strengthening the immune system. Therefore, rising consumer awareness regarding preventative healthcare is anticipated to boost the market growth over the forecast period. In addition, probiotics shield healthy organisms from potentially dangerous organisms. These products are now utilizedfor the diagnosis ofmental illnesses, and also to treat issues related to digestiveand neurological diseases. Moreover, they protect proteins & lipids from oxidative damage, strengthen the human digestive system, and reduce pathogens in the body.

The rise in consumer preference towards natural products is a major factor fueling the market growth. Consumers rising concerns regarding the effectiveness of probiotics bacteria on health and preventive healthcare propels the market expansion. Furthermore, probiotics demand has upsurge owing to the rise in the consumption of functional foods, which, in addition for providing basic nutrition, have the potential to improve health.

Report Scope of the Probiotics Market

The COVID-19 epidemic has led to a shift in consumption patterns of consumers and eventually affecting the demand for diet being followed. Utmost of the consumers are choosing for products with a nutritional value rather of junk or reused foods. In addition, in US, suddenly, the probiotics sales rose by more than 30% as people fear about buying the booster of nutrient in order to keep themselves strong and immune. Since also, pharmacies are strut up helps of probiotics in various forms. Furthermore, owing to the fear infection, it has resulted in the adoption of healthy life, therefore fostering the demand for probiotics in the market. As the peril of virus infection is among all the age groups, manufacturers are designing probiotics, which can have effective results in every age group and individual.

The speed of population growth and growth of elderly population around the regions is dramatically rising. As per the data of UN Department of Economic and Social Affairs, the global population which is aged equal or above 60 years are almost around 962 million in the year 2017. Also, this number of elder segment is likely to reach nearly billion 2.1 by the year 2050. Furthermore, the number of people aged equal or above 80 years is estimated to rise by 425 million by the year 2050 from million137 in the year 2017. Over the forthcoming years, the ratio of older population is likely to grow with the fastest growth rate in Africa, where the aged population is expected to reach 226 million by 2050 from 69 million in 2017. Furthermore, among all the regions, Rapid growth among the elderly population has led to rise in the number of patients which are suffering from chronic diseases, which, in return, is likely to boost the requirement for microbes, similar as probiotics, in order to limit the threat of such conditions.

Based on ingredient, the bacteria segment garnered the highest probiotics market share in 2020 due to surge in demand for bacteria derived probiotics food products. This is attributed to the growth in health issues that have encouraged market players to invest in R&D and launch new & innovative probiotics products.

Based on application, the food & beverages segment accounted largest revenue share of over 75% in 2021 due to the rising popularity of probiotic functional foods & potables among consumers. Growth in consumer awareness, faith in its efficacy, and safety are some of the factors driving the market of probiotics. The food & beverages segment is the largest market segment across the regions. Consumers are now taking a visionary approach towards preventing chronic conditions. China and Japan are the two dominant markets in the Asia Pacific, and the Japanese market is projected to reach its maturity level during the forecast period.

On the other hand, the animal feed segment is projected to record the fastest growth during the cast. The ban on synthetic antimicrobial growth promoters (AGP’s) in Europe is a factor driving the market. The motive behind the ban was to check the practice of using antibiotics, antimicrobials, and other medicines for promoting the growth of livestock in order to rise the production of meat, milk, and other products.

Asia Pacific led the global market with a prominent market share in 2021 with 71%. The region is witnessing a substantial rise in consumer awareness due to competitive strategies opt by the global players. Strong demand from countries, similar as India, China, and Australia, is contributing to the overall market growth. The rising population, coupled with the rising disposable income and improvised standard of living, is a factor anticipated to cater the regional market growth. During the previous years, owing to a deficiency of technology, the market was swamped with these products which lacked room temperature stability. Therefore, this problem of quality was addressed as major challenge and various companies introduced technologies, such as microencapsulation, which enhance the stability and life of the probiotic bacteria in the region. 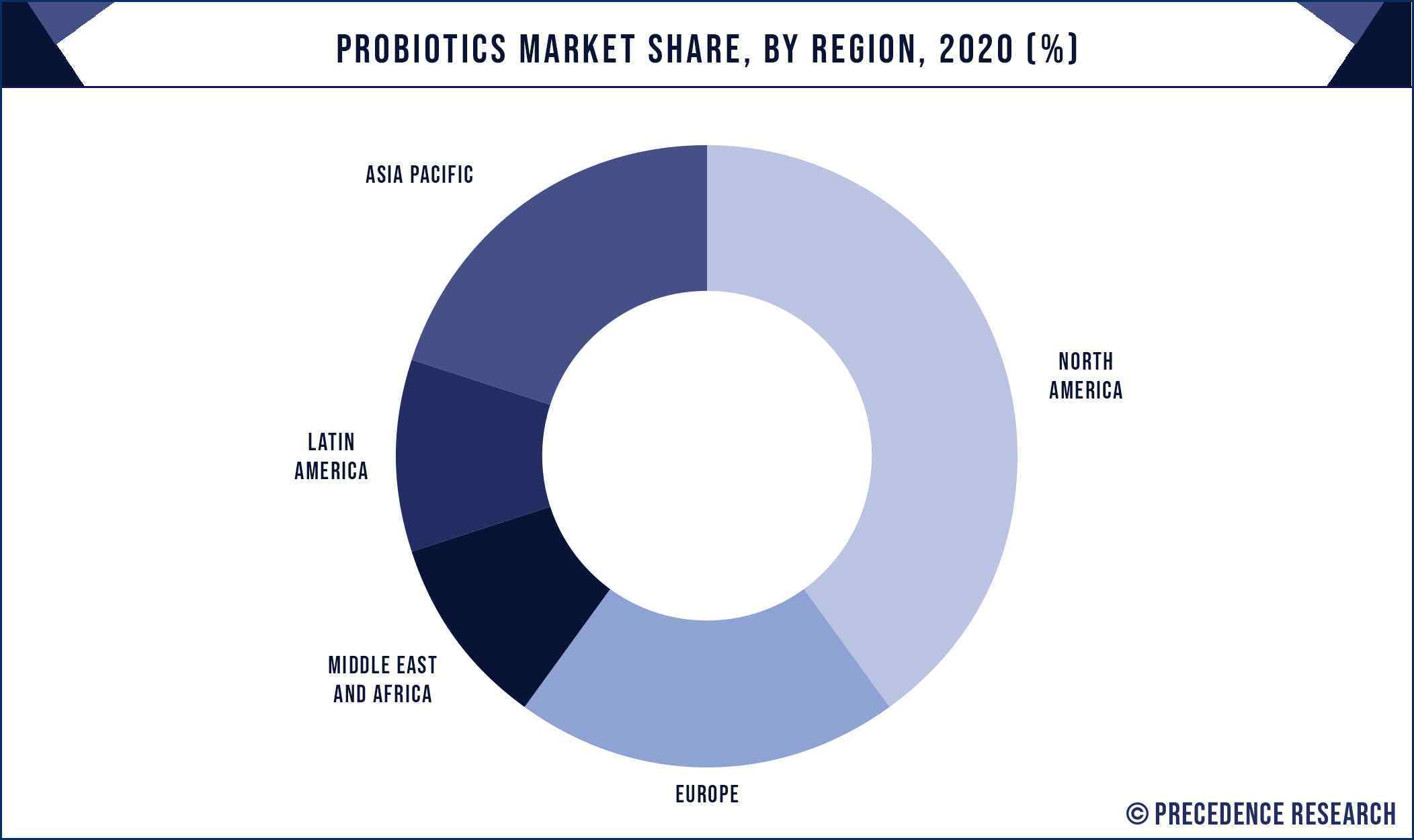 North America region is likely to foresee considerable market growth during the forecast period. Also, continued manufacturer’s investments in the food & beverage and pharmaceutical industries are likely to contribute to the market growth of the region. In addition, the key players of the region are investing in R&D in order to launch new products to provide products to the consumers of various age groups and different genders. Therefore, all these types of factors are expected to propel the market growth over the forthcoming time period.

The probiotics market is highly fragmented with the presence of several local and global companies. These market players are striving to gain higher market share by adopting strategies, such as investments, partnerships, and acquisitions & mergers. Companies are also spending on the development of improved products. Moreover, they are also focusing on maintaining competitive pricing.

Some of the prominent players in the global probiotics market include: