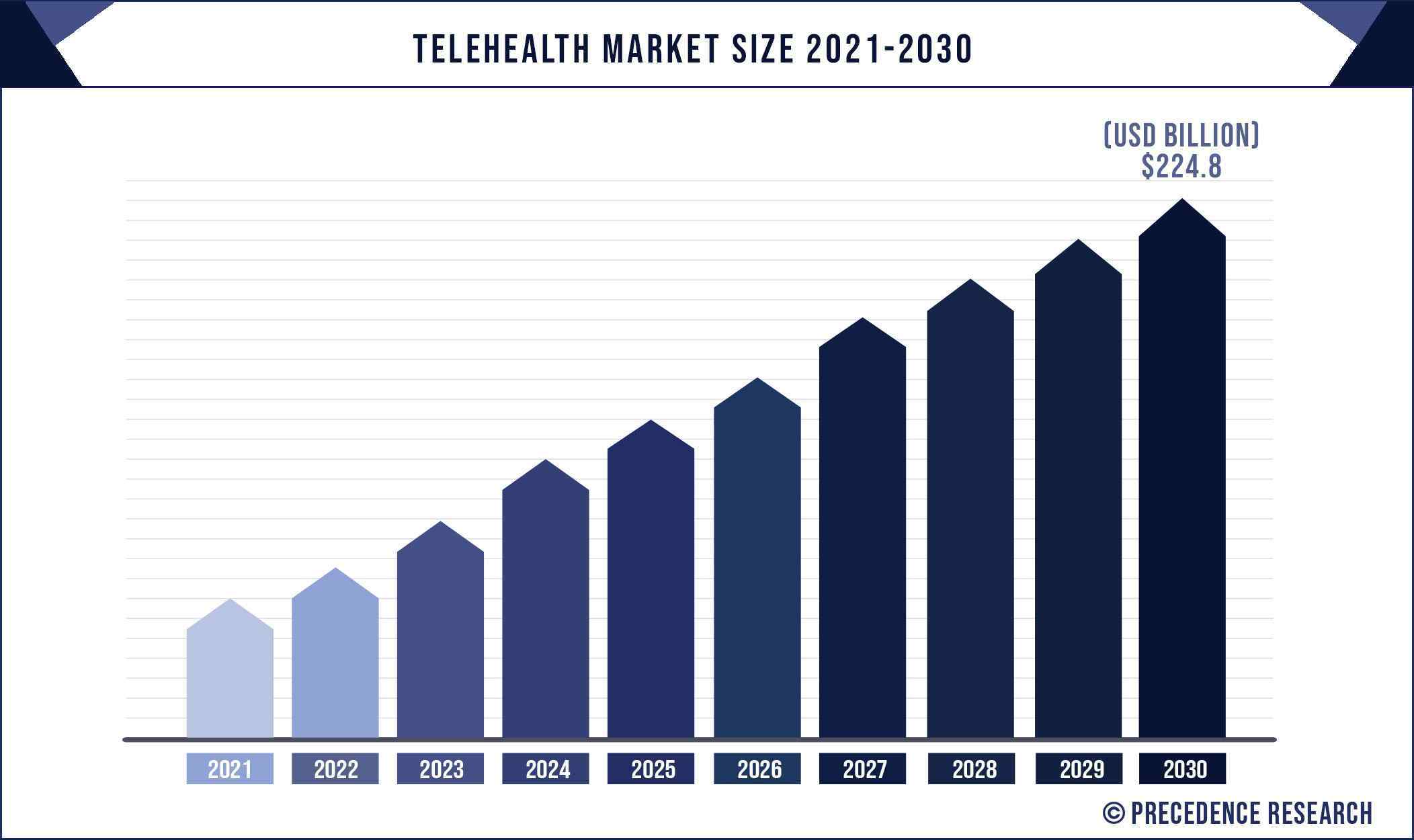 The global telehealth market is driven by the growing demand for the digital and convenient healthcare products and services among the hospitals and the consumers across the globe. The telehealth platforms are gaining rapid traction among the consumers owing to the availability of healthcare professional services like consultations on the press of a button. The rising investments on the development of IT infrastructure and rising adoption of smartphones and internet among the global population is fostering the growth of the telehealth market. According to ITU, around 4 billion people were using internet by the end of 2019. Most of the internet users operates through their smartphones. Doctors and physicians are now increasingly adopting the telehealth platforms for offering consultations and other services. Telehealth is rapidly becoming an important distribution channel for the physicians for offering their services. Therefore, the increased demand for the telehealth platforms among both the consumers and the doctors is augmenting the global telehealth market.

The rising prevalence of chronic diseases and growing geriatric population are among the major drivers of the telehealth market. Furthermore, the rising number of hospitals and clinics across the globe is boosting the adoption of telehealth. Telehealth keeps a track of patients’ medical health and supplies useful insights to the doctors during the treatment of the patients. This helps the doctors to provide effective treatment to the patients. Moreover, the geriatric patient needs to be monitored continuously and hence rising geriatric population is fueling the demand for the telehealth platforms. The rising penetration of telehealth apps across the globe is contributing exponentially towards the market growth. Further, various developmental strategies by the key market players like acquisitions, partnerships, and new product launches is boosting the growth of the global telehealth market.

Based on component, the hardware segment dominated the global telehealth market in 2020, in terms of revenue and is estimated to sustain its dominance during the forecast period. This segment accounted for more than 80% of the market share in 2020. The hardware consists of wide variety of devices and are extensively used in the hospitals, clinics, and homecare telehealth devices. Various hardware used consists of mobile frame, communication lines, computer systems, therapeutic devices, video feed, and various others. The extensive usage along with the high prices of the hardware has resulted in a huge revenue generated by this segment. 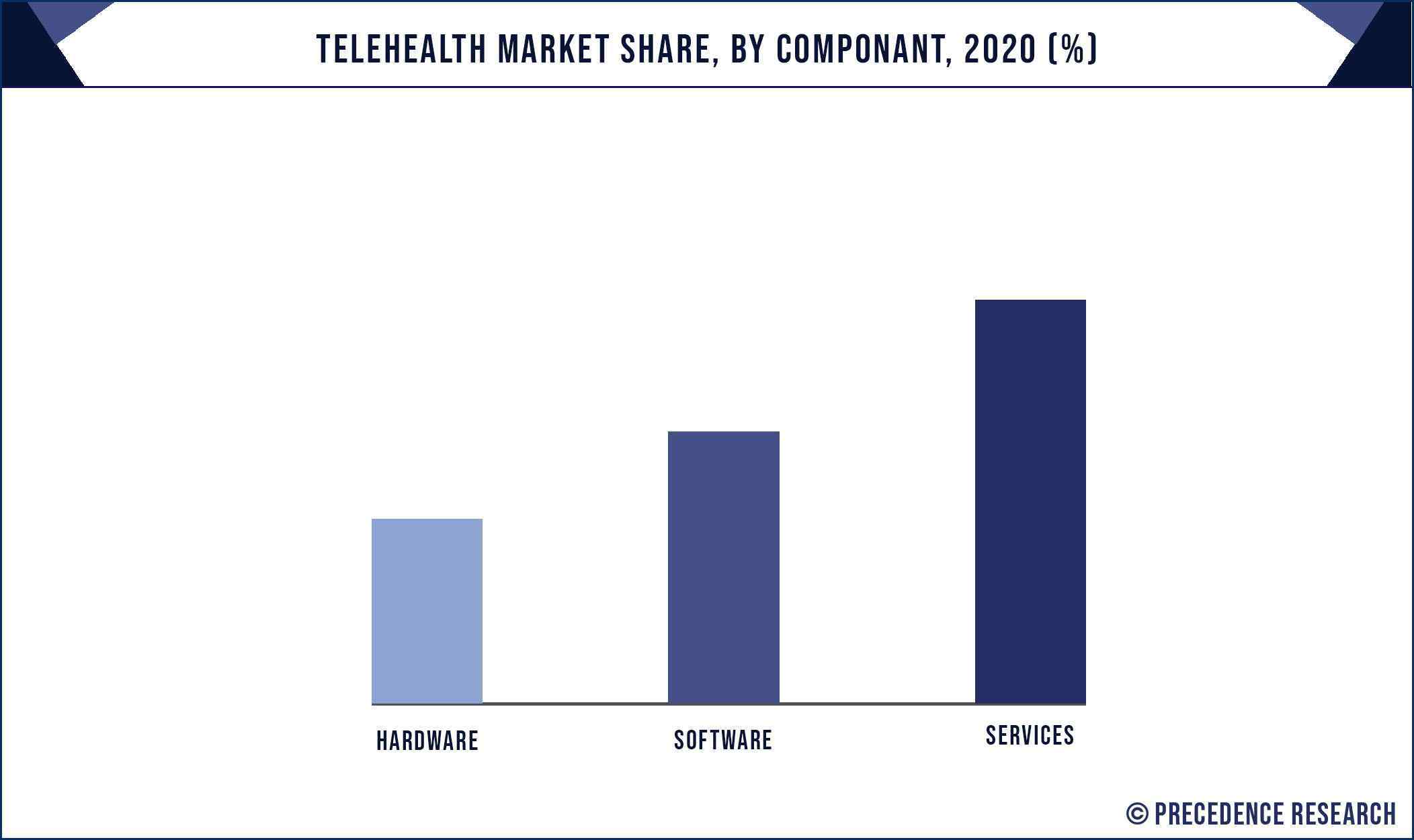 On the other hand, the software segment is anticipated to be the fastest-growing segment during the forecast period. The rapid development and updates in the software system to enhance the efficiency and effectiveness of the telehealthdevices is exponentially boosting the segment growth. Moreover, it plays an important role in remotely monitoring the patient’s health condition. This factor is boosting the growth of this segment.

Based on end user, the hospitals segment dominated the global telehealth market in 2020, in terms of revenue and is estimated to sustain its dominance during the forecast period. This can be attributed to the increasing adoption of telemedicine in the healthcare sector. The deployment of telehealth platforms such as telemedicine and tele-ICU can help to reduce the burden on the physicians and doctors in the hospitals. Moreover, the rising number of hospitals and private clinics in the developed and developing markets are expected to drive the demand for the telehealth in the upcoming years. The rising demand for the technologically advanced devices is rising across the global healthcare industry in order to improve operational efficiency, reduce cost, and increase profitability. 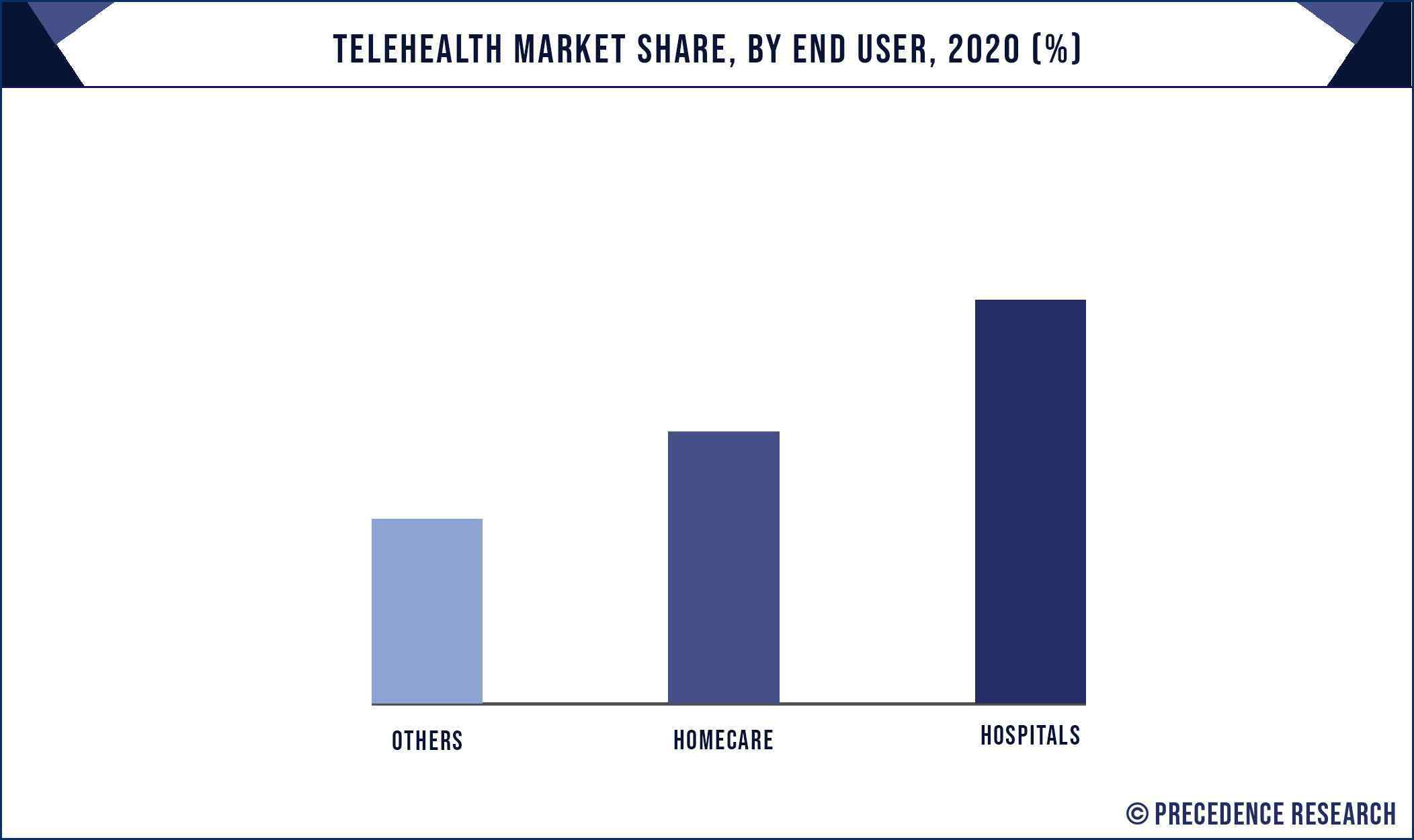 On the other hand, the homecare segment is estimated to be the most opportunistic segment during the forecast period. This is attributed to the increasing awareness regarding the hospital acquired infections, growing geriatric population, and increased disposable income. Most of the old age people likes to get the treatment staying at their homes and hence the homecare segment is expected to drive the growth of the telehealth demand. Further, the rising awareness regarding the hospital acquired infections resists the patients to go to the hospitals and compels the patients to obtain treatment from the comfort of their homes.

Based on application, the telemedicine segment dominated the global telehealth market in 2020, in terms of revenue and is estimated to sustain its dominance during the forecast period. The rapid penetration and growth of the telemedicine across the globe in past year has resulted in the increased adoption of the telemedicine among the consumers. Moreover, the emergence of numerous telemedicine players in the market has significantly contributed towards the growth of the market. Furthermore, the advancements in the cloud-based storage services is complementing the telehealth market by providing quick access to data.

On the other hand, the patient monitoring segment is expected to be the fastest-growing segment during the forecast period. This is attributable to the increased demand for the continuously monitoring of the patients especially the old age patients. Further, the rapid adoption of the smart medical wearable devices is augmenting the segment growth, which continuously tracts the health condition of the user. According to the American Telemedicine Association, approximately one million people are using cardiac monitoring devices, which is expected to rise further. This is a major driving force behind the patient monitoring segment.

Based on region, North America dominated the global telehealth market in 2020, in terms of revenue and is estimated to sustain its dominance during the forecast period.The rising burden of chronic diseases and growing geriatric population in US are the major factors behind the growth. Moreover, the region is characterized by increased disposable income, increased demand for the advanced technologies, and developed healthcare and IT infrastructure. According to NCBI, over 40,000 health apps were available for download on Apple iTunes store in 2013 in US. Thus, rapid growth of the telehealth apps is boosting the market growth in this region. 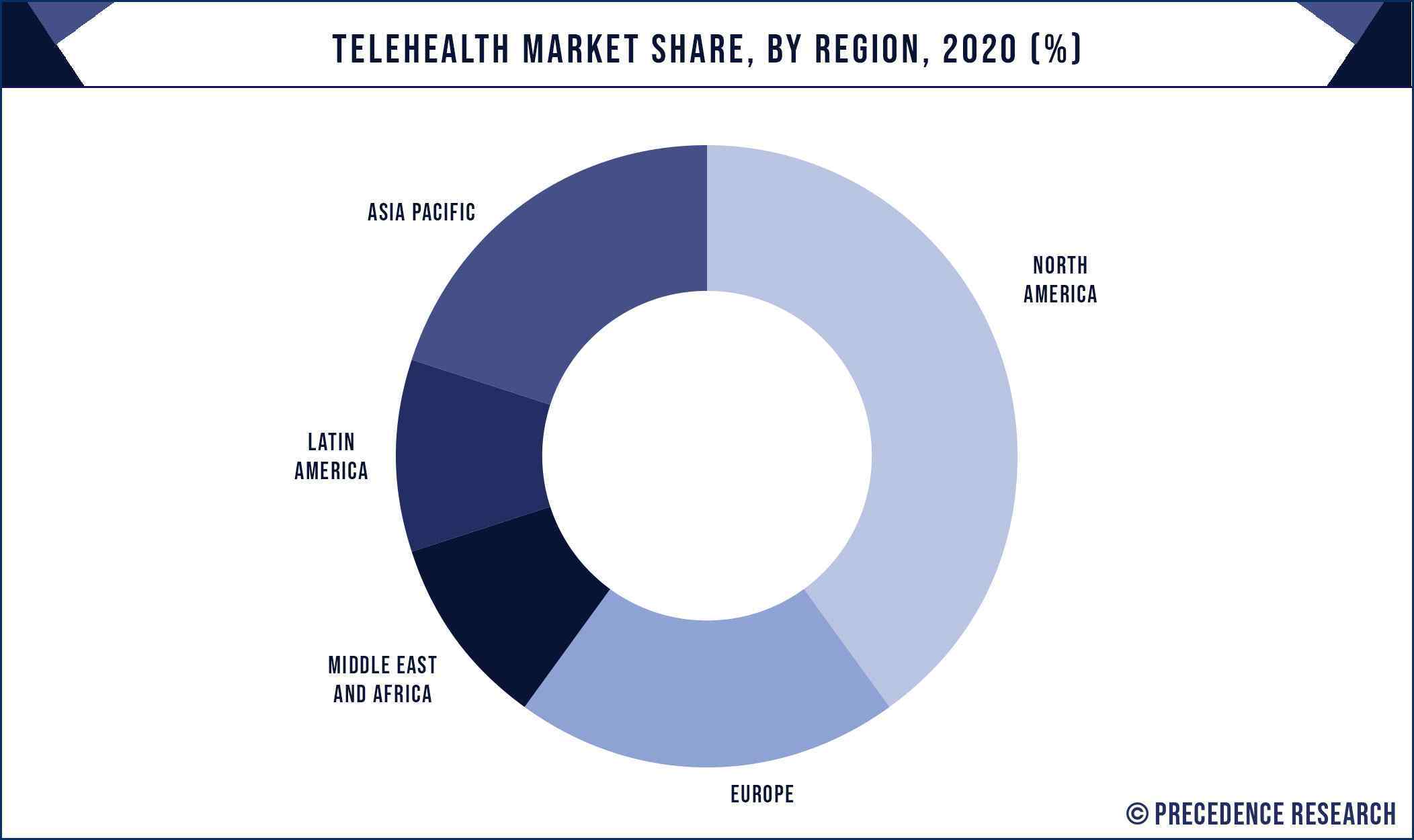 On the other hand, Asia Pacific is estimated to be the most opportunistic market during the forecast period. Asia Pacific is estimated to grow due various factors such as largest population, rapid urbanization, rising investments on healthcare infrastructure, and increased investments on the IT infrastructure. Further, the use of advanced technologies can significantly reduce the healthcare costs, which drives the adoption of telehealth in the Asia Pacific region.

In January 2020, Teladoc Health completed the acquisition of InTouch Health, to expand its network of hospitals and other healthcare facilities in the market.

Some of the prominent players in the global telehealth market include:

Report Scope of the Telehealth Market

By Mode of Delivery