The global continuous glucose monitoring device market was estimated at USD 4.7 billion in 2021 and is expected to reach over USD 10.34 billion by 2030, poised to grow at a compound annual growth rate (CAGR) of 9.2% during the forecast period 2022 to 2030. 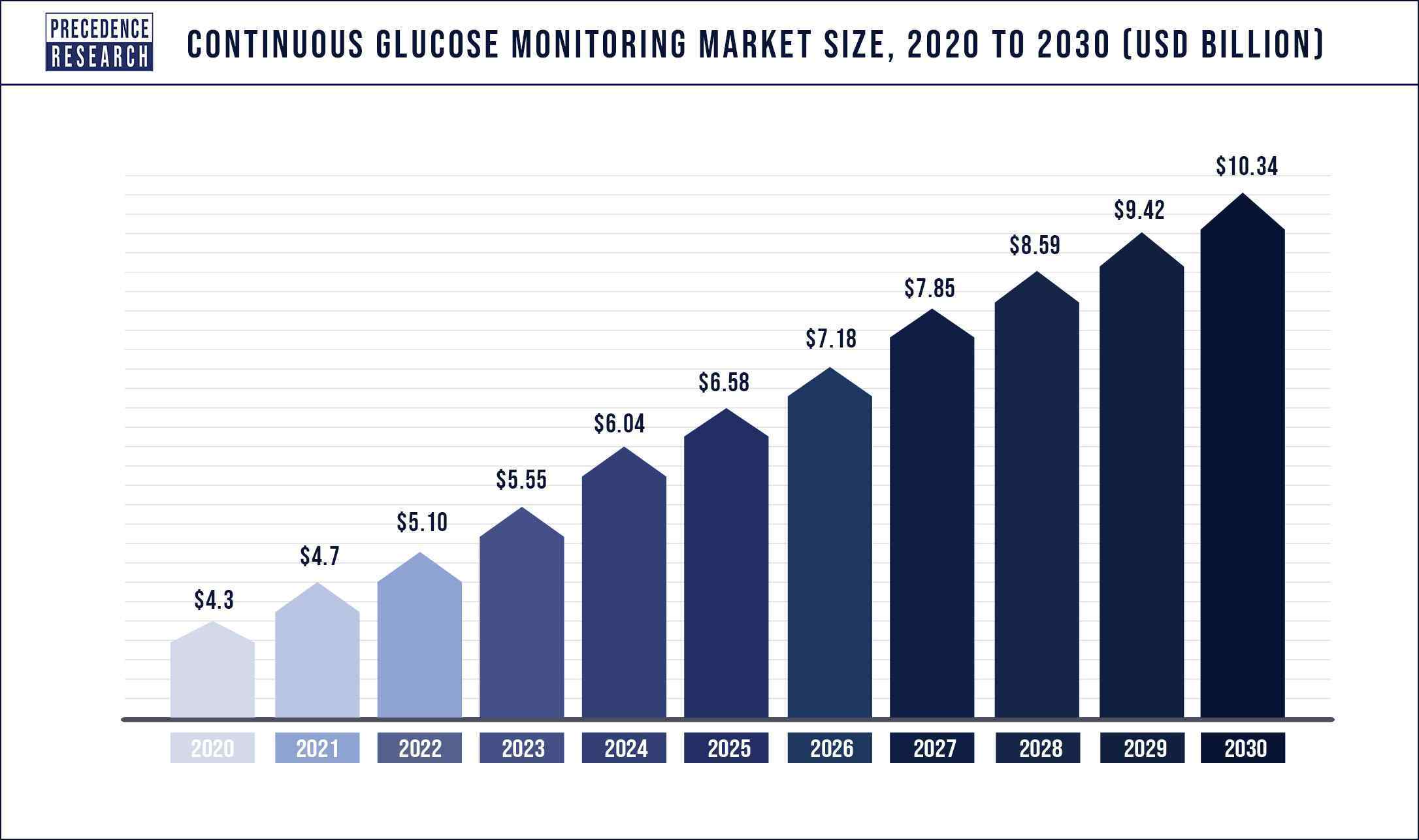 The global continuous glucose monitoring device market is primarily driven by the rising prevalence of diabetes and increasing demand for the treatment and preventive measures across the globe. According to the World Health Organization, around 1.5 million deaths were directly linked to the diabetes in 2019 and around 2.2 million deaths were linked to high blood glucose in 2012. According to the International Diabetes Federation, around 700 million people will have diabetes around the globe, by 2045. Therefore, the alarming rise in the diabetic population globally is expected to drive the demand for the CGM device in the forthcoming years. Furthermore, the growing geriatric population is a significant factor that will augment the demand for the CGM device. Geriatric people are prone to high blood glucose levels and diabetes. The rising awareness regarding the diabetes, availability of CGM devices, increasing disposable income, and increasing expenditure in the healthcare are the significant factors that are estimated to augment the global CGM device market in the foreseeable future.

Overweight and obesity are the two major causes of diabetes. Moreover, the unhealthy food habits among the population have contributed in the growth of the number of obese people. According to the World Health Organization, more than 1.9 billion global populations were overweight, out of which around 650 million adults were obese in 2016. The CGM device tracks the glucose levels and continuously monitors it using latest technologies like sensors and wireless connectivity, which helps in the proper management of the blood glucose levels. The aggressive marketing by the prominent players in the developed and developing markets had augmented the demand for CGM devices by spreading the awareness regarding the glucose monitoring. All these factors are expected to have a positive impact on the global continuous blood glucose monitoring device market.

Based on component, the sensors segment accounted for around 40.5% of the market share in 2021. This is attributed to the accuracy and efficiency of the sensors in analyzing the blood glucose levels. Moreover, higher preference for the sensors has augmented the growth of this segment. It efficiently reads the fluctuations in the blood glucose levels which makes sensor the dominating segment in the CGM device market. The technological advancements in the sensors technology has improved the performance of the sensors. The advancements in the sensor technology has resulted in increasing the affordability of the sensor CGM devices, thereby opening growth prospects in the developing and the underdeveloped economies across the globe.

Based on end user, the home healthcare segment accounted for around 45% of the market share in 2021. This can be attributed to the rising prevalence of diabetes, increased awareness regarding the availability of CGM devices, increasing disposable income, and increased demand for the preventive measures among the consumers. The increasing health consciousness and rising awareness regarding the management of blood glucose levels on regular basis has augmented the demand for the CGM device at home healthcare segment. Moreover, aggressive marketing strategies adopted by the top market players have exponentially contributed towards the growth of this segment. 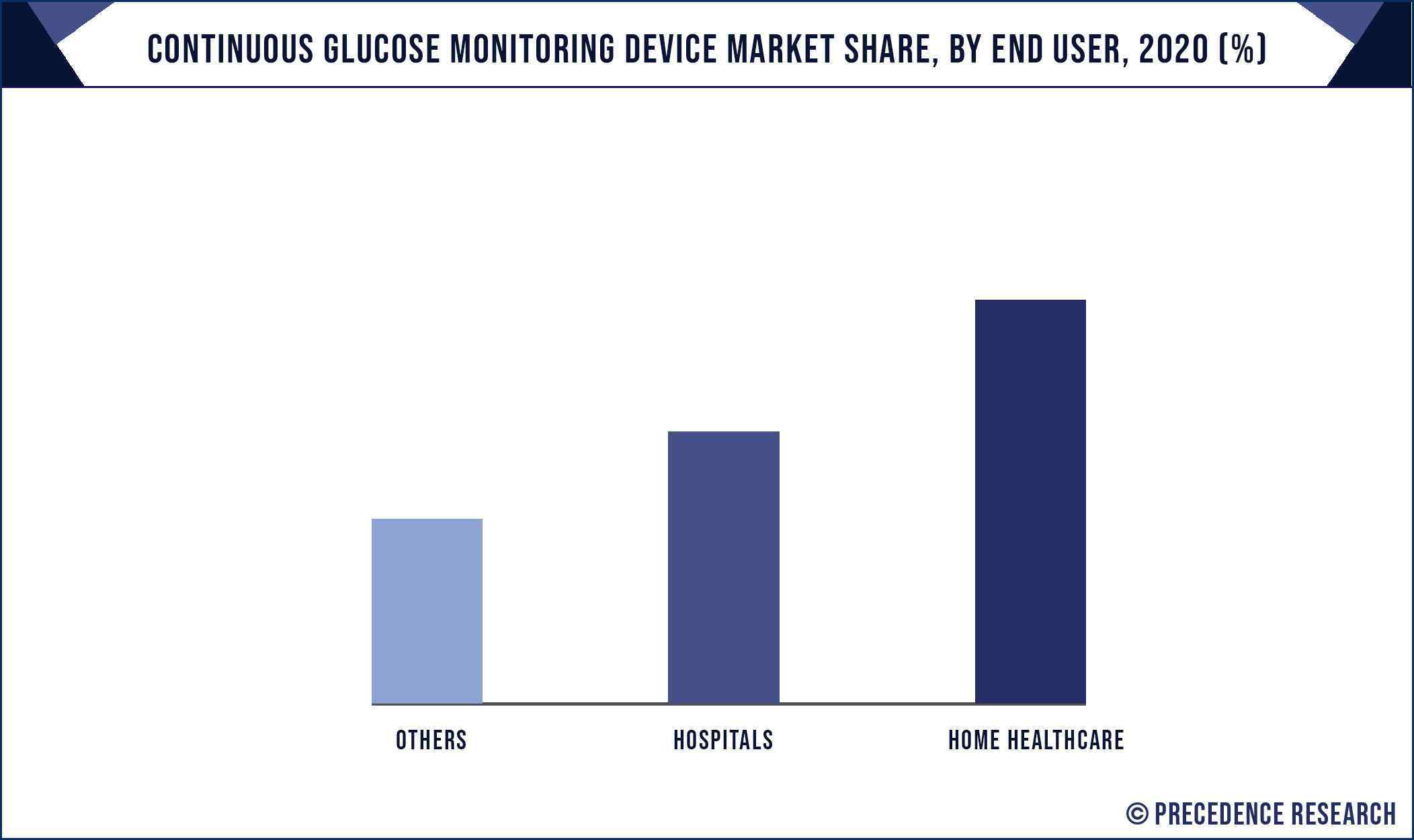 On the other hand, the other segment is estimated to be the most opportunistic segment during the forecast period. The rising penetration of clinics and diagnostic labs across the globe is a major factor that boosts the demand for the CGM devices. Moreover, low literacy in the low and middle income countries makes the diabetic population dependent on the clinics and diagnostic labs for the continuous blood glucose monitoring, which is a major factor for the growth of the others segment.

Based on region, North America accounted for around 41% of the market share in 2021. This is simply attributed to the high literacy rate, increased disposable income, increased healthcare expenditure, increased adoption rate of latest technologies, increased awareness regarding diabetes, growing geriatric population, and higher demand for the diabetes preventive measures in the major markets like US and Canada. In North America, Canada is the fastest-growing market, owing to the rising cases of diabetes. According to the Diabetes Canada, around 11 million people were suffering from diabetes in 2020, and this number is expected to rise in the future. 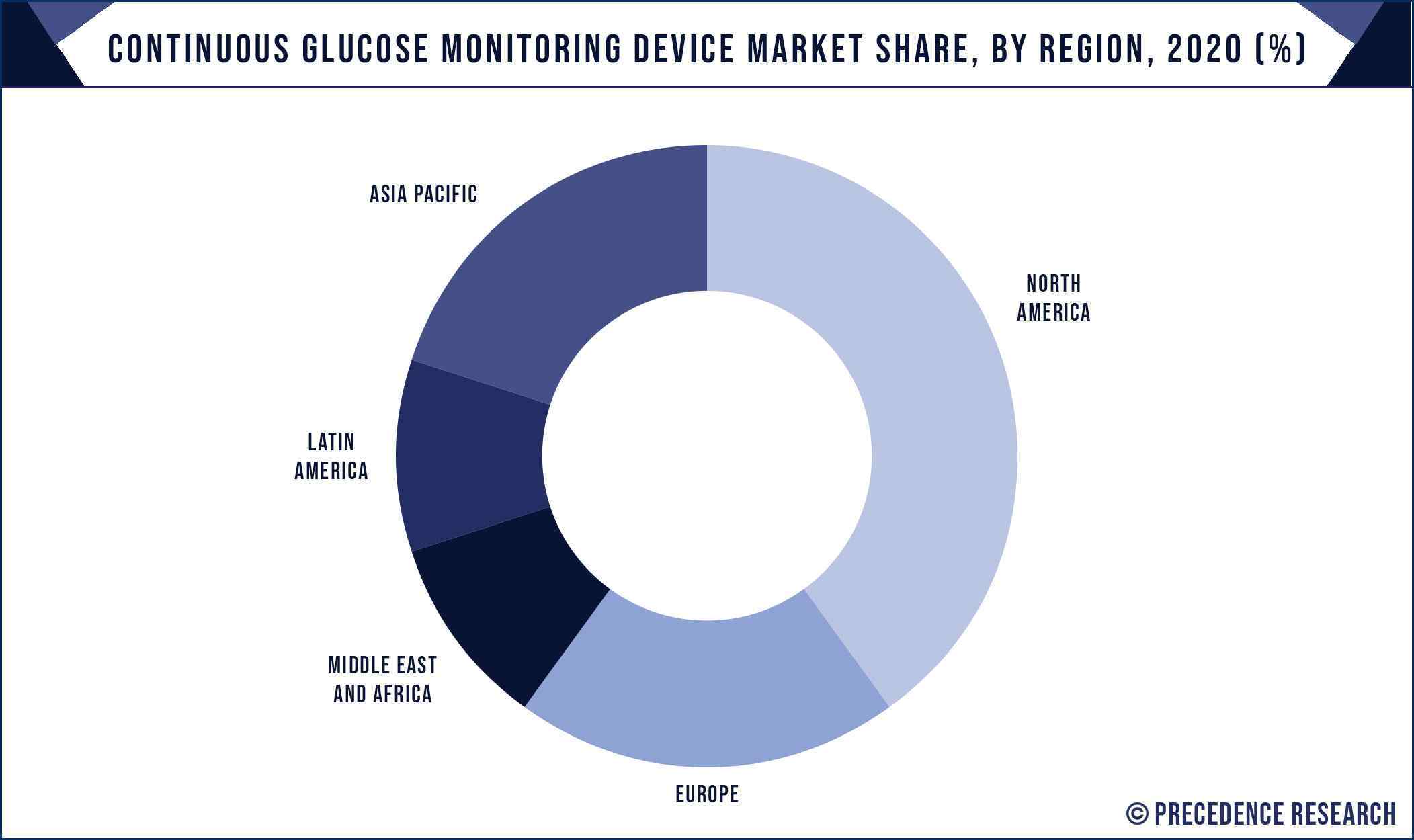 The Asia Pacific is estimated to be the most opportunistic market during the forecast period. Asia Pacific presets a lucrative growth opportunity to the market players. The presence of huge population, rising urban population, rising healthcare expenditure, rising awareness regarding diabetes, and unhealthy food habits are the major factors that are altogether augmenting the growth of the continuous blood glucose monitoring device market.

In February 2020, Abbott and Insulet entered into a partnership to develop CGM device by integrating automatic insulin deliver and glucose sensing technologies that can provide enhanced CGM solutions.

In November 2020, Medtronic acquire FDA approval for InPen, a smart insulin pen that can serve those diabetic patients who are on daily insulin injections.

Some of the prominent players in the global continuous blood glucose monitoring device market include: