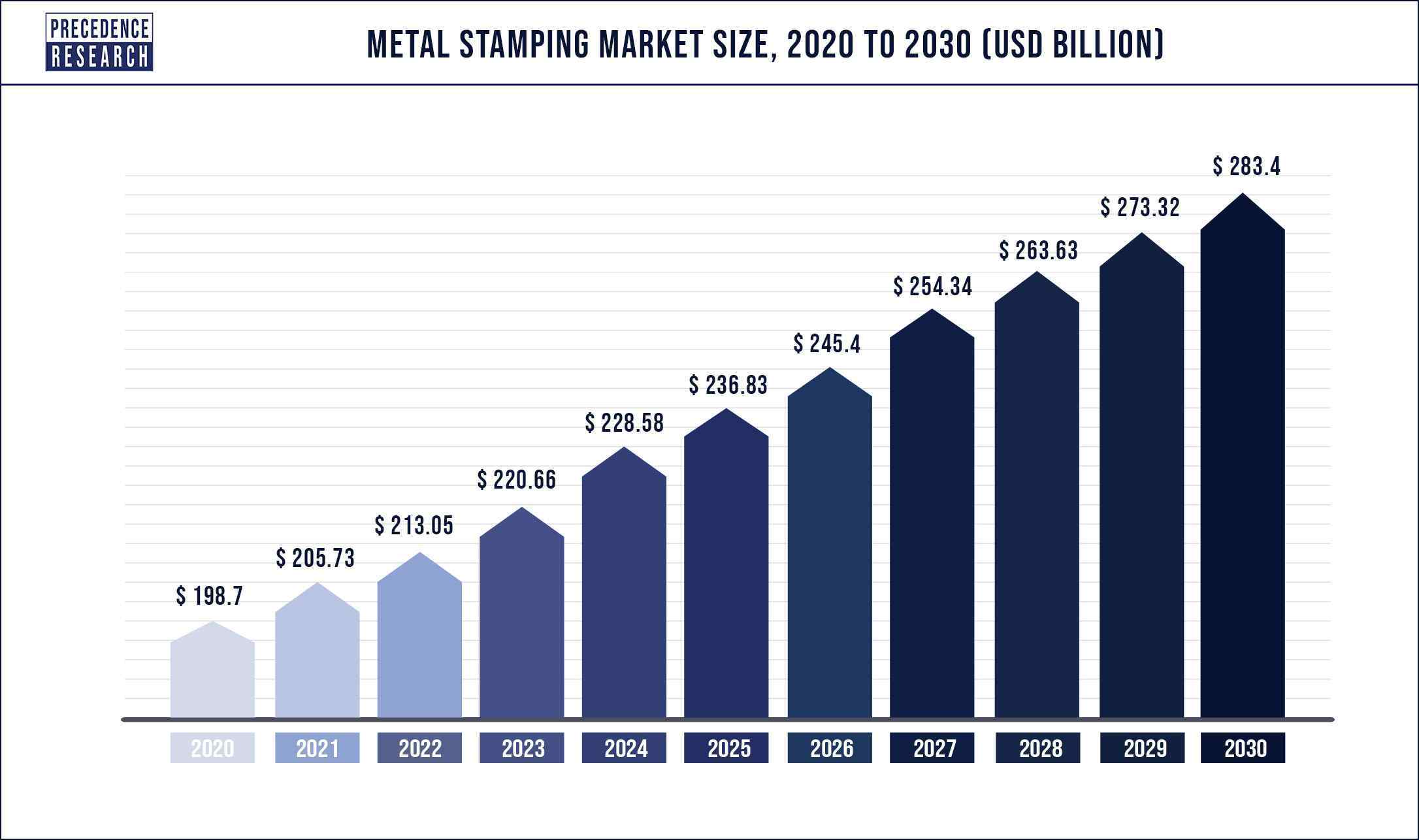 Metal stamping is a complex process of manufacturing which is utilized to convert flat metal sheets into a certain specific shapes by keeping them in either the blank or coil form into a stamping press. This can further be done by using various techniques of metal forming, including punching, blanking, piercing, bending, embossing, coining, and flanging. In addition, metal stamping can further produce a myriad volume of metal components which are identical in nature at a lesser cost. Consequently, various companies have been majorly investing in R&D activities in order to introduce automated metal stamping technology for the production of agricultural equipment.

The up surging consumer electronics market is likely to remain a major boosting factor for the application of metal frames in headphones, mobile phones, speakers, gamepads, and controllers. In mobile, metal stamping is utilized in manufacturing chassis, camera lens holders and antennas as it provides high corrosion resistance, tolerance, electrical conductivity, and a smooth finish. According to GSM Association, the number of unique mobile subscribers around the global is expected to reach 5.9 billion by the year 2025, which is likely to boost the demand for phones and eventually metal stamping during the forecast period.

The COVID-19 has by the time affected the sales of industrial machinery and electronics equipment in the primary quarter of 2020 and has a major impact on the market growth during that year, as now the key players are efficient with workforce shortage and trying to come up with the losses, during the 2020. The industrial machinery significant requirement is majorly noticed among huge manufacturing countries like US, which is majorly affected by the spread of novel COVID19, therefore hampering the demand for industrial machinery. The North America region especially the U.S. has observed an extraordinary rise in number of confirmed cases which resulted in large-scale lockdown across various regions as well as industrial activities. In resultant, several medium& small enterprise owners have shrunken their industry personnel whereas many other have done rightsizing shortly owing to restricted business operation. In addition to this, the company also decreased the allocated budget for manufacturing of metal stamping owing to factor of economic slowdown, which affected the business activities. Moreover, the supply chain, component manufacturer and distributor’s lack of availability of business has further significantly influenced the production of metal stamping by the market players. Therefore, the market is likely to witness a major downfall in the demand among the end-users for the year.

Furthermore, most of the manufacturing plants were shut down, municipalities were functioning slowly as compared to the previous year, and the automotive industry was at halt, which negatively impacted the metal stamping market in the region.

The blanking segment held the largest profit share of further than 30% in the year 2020. Blanking is an integral part of manufacturing motorcars on account of its precise and superior stamping capability. The technique involves the use of a die to gain the asked shape. The growing use of blanking in the machine industry on account of its capability to cater to mass product lines is anticipated to augment segmental growth over the coming times.

Embossing was the second largest member in 2020 owing to its advantages similar as the capability to produce different patterns and sizes, depending on the roll dies. This is performed by passing a metal sheet between rolls of the required pattern. Embossing a distance essence reduces disunion, enhances stiffness and severity, and enhances traction.

Based on material, steel stamping market captured the worldwide market in 2020attributable to high & easy accessibility of steel, minimal effort, high quality, and low cost. However, the market is estimated to foster a quick growth during the forecast period. The increasing growth of metal stamping market is exponentially attributed to the upsurge in interest from the automotive and aerospace sectors in order to keep fuel weight and expenses down.

Asia Pacific accounted for the largest profit share of more than 36% in 2020 owing to the growing demand for cars and consumer electronics in the region and is anticipated to witness the fastest growth rate over the cast period. The growth is majorly driven by developing countries similar as India, China, Bangladesh, Pakistan, and Indonesia where the rising demand for phones along with other consumer electronics is anticipated to foster the growth of the market. Furthermore, growing industrialization coupled with structure development and growth in the defense industry is anticipated to have a positive impact on the demand for equipment and machinery in Asia Pacific. Countries similar as China and India are adding their investments in the defense industry. For instance, China increased its defense budget by7.5% in 2019 to upgrade the defense outfit, and launch advanced defense aircraft. The rising demand for defense outfit is anticipated to drive the market during the forecast period. 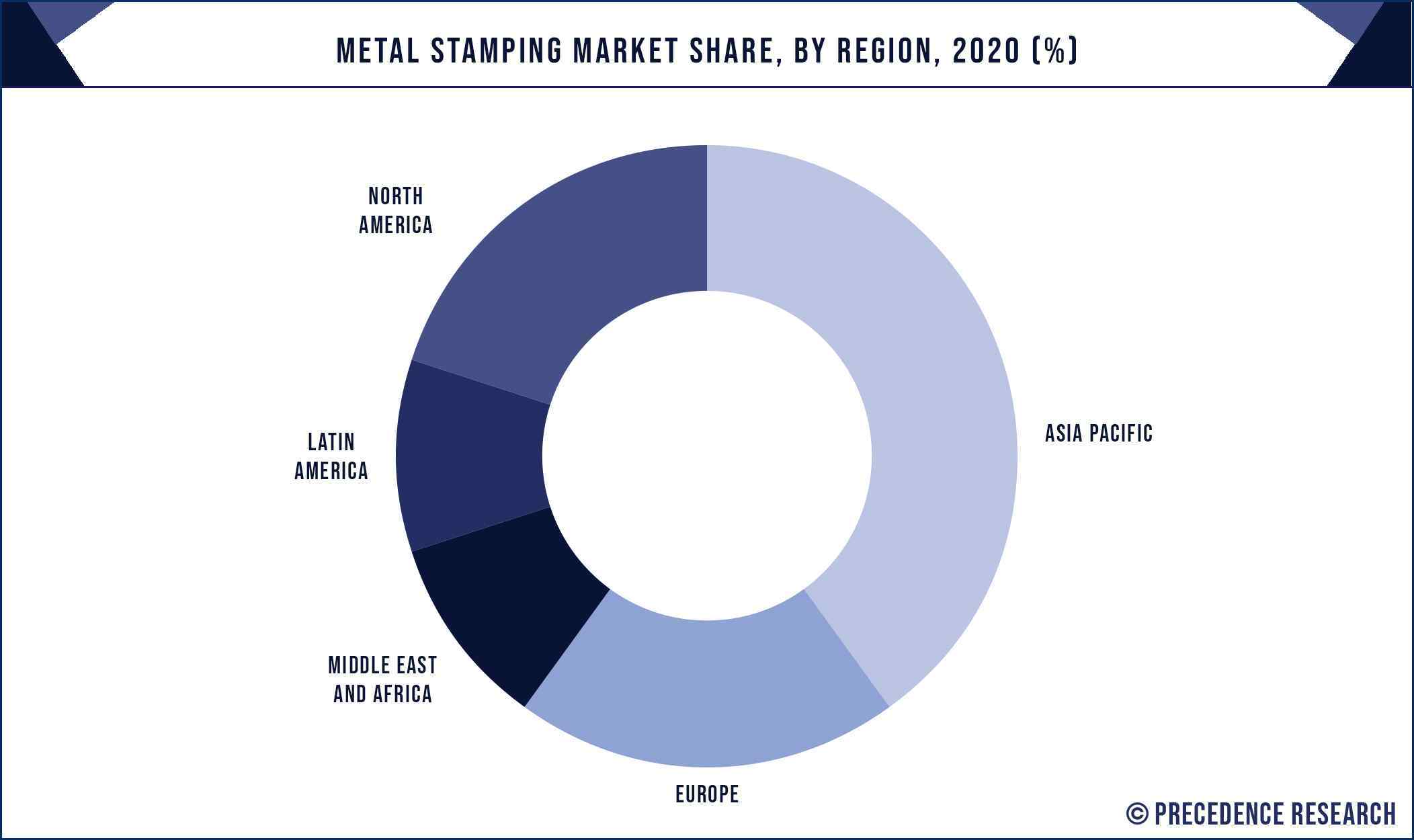 On the other hand, in North America, product consumption is likely to be driven by rising demand from the automotive industry. Automakers in the region are focusing on adding the product of lightweight vehicles by using metal similar as aluminum in various factors to reduce energy consumption. As of 2018, nearly 50% of the vehicles manufactured in the region comprise of aluminum hoods and this figure is anticipated to reach 80% by 2030. The adding product of aluminum hoods is anticipated to drive the market during the forecast period.

Some of the prominent players in the global metal stamping market include: