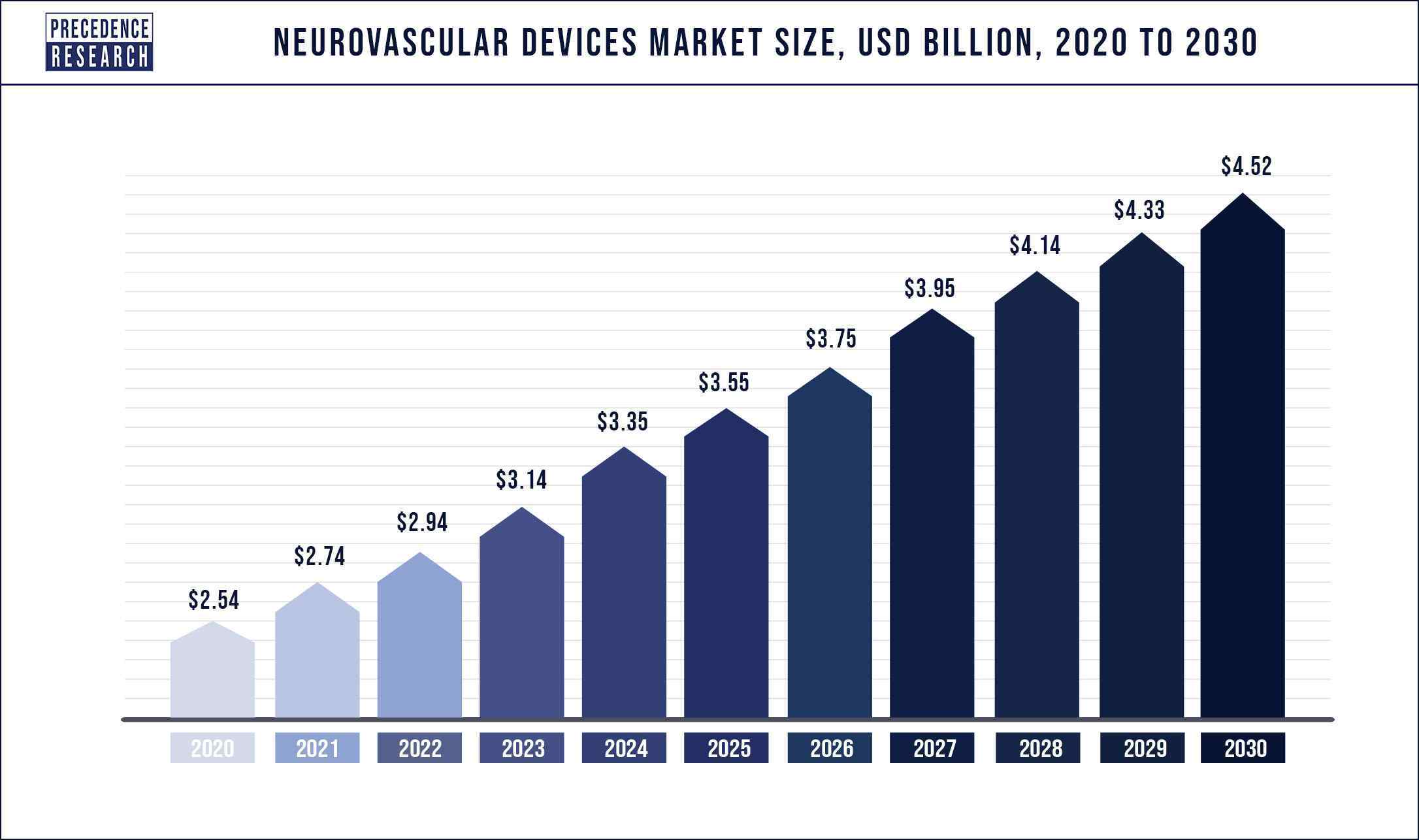 The rising prevalence of neurovascular disorders among the global population is driving the growth of the global neurovascular devices market. Neurological devices are widely used for the diagnosis and treatment of diseases related to the central nervous system and brain. The rising popularity of the minimally invasive surgeries owing to the technological advancements in the field of the neurology is propelling the demand for the neurovascular devices across the globe. The growing prevalence of neurological disorders like stroke, epilepsy, and cerebral aneurysm among the population is driving the demand for the neurovascular devices. According to the CDC, there were around 15.2 million out of 56.9 deaths registered globally, due to stroke, in 2018. The most common type of stroke recoded was the Acute Ischemic Stroke. As per the data provided by the NHS England, 1 in 12,500 people suffers from ruptured brain aneurysm each year and approximately 3% of the people in UK is suffering from cerebral aneurysm. The brain aneurysm is caused by various factors such as smoking and hypertension. The rising number of deaths linked to brain aneurysm is boosting the adoption of neurovascular devices across the global population.

The rising government investments in the development of sophisticated healthcare infrastructure and rising investments by the corporate in the research and development activities has led to the development and increased adoption of the neurovascular devices. The availability of advanced treatments for various neurological disorders owing to the presence of technologically advanced neurovascular devices has significantly contributed towards the market growth. For instance, in October 2020, the BENDIT Technologies, in Israel, successfully developed the new BENDIT neuro micro-catheter. These type of innovative product launches by the top players are expected to provide growth opportunities in the foreseeable future. Further the growing geriatric population is boosting the demand for the neurovascular devices. As per the National Center for Biotechnology Information, strokes are common in women and are frequent in those aged 55 years to 65 years. According to the Unite Nations, there were around 382 million old age people, aged 60 years or above, across the globe in 2017 ad this number is expected 2.1 billion by 2050. Hence, rapidly growing geriatric population is expected to drive the market growth in future.

Based on device, the cerebral embolization & aneurysm coiling devices segment accounted for around 38% of the market share in 2020. This is attributed to the increasing prevalence of various neurological disorders such as Arteriovenous Malformations, brain aneurysm, and strokes among the population. Moreover, rising investments in the development of improved healthcare infrastructure, increasing consumer expenditure on healthcare, and rising investments in the research & development are the major factors that can be held responsible for the growth of this segment.

The neurothrombectomy devices segment is estimated to be the most opportunistic segment during the forecast period. The rising number of Acute Ischemic Strokes among the population is the major factor that propels the growth of this segment. Furthermore, the technological advancements in the field of neurology is expected to boost the adoption of neurothrombectomy devices in the forthcoming years.

Based on application, the stroke segment accounted for over 57% of the market share in 2020. The increased prevalence of the strokes among the population, especially among the elderly population has augmented the growth of this segment. According to the CDC, around 16.7% of the people across the globe will have a brain stroke. As per the CDC, over 795,000 people have stroke in US every year and it accounts for around 140,000 deaths in US every year. It is also considered to be the second most prominent causes of death. Hence, this segment is expected to sustain its dominance throughout the forecast period. 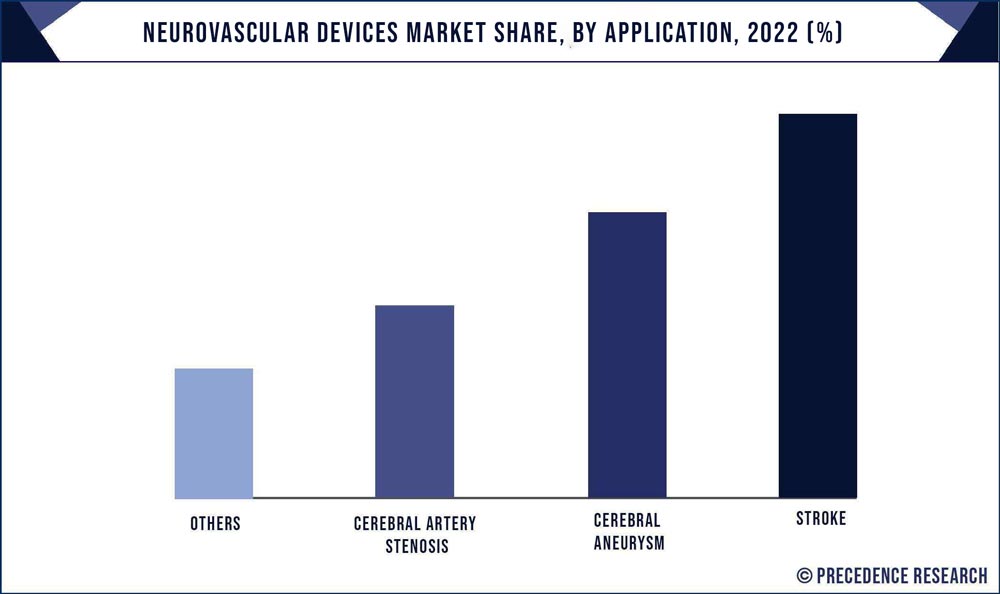 Moreover, the rising efforts by the government and various NGOs in spreading the awareness regarding neurological disorders are fostering the segment’s growth. The new product launches related to the stroke solutions is boosting the market growth. For instance, in September 2020, CERENOVOUS introduced CERENOVOUS Stroke Solution that aids the doctors in clot removal procedure.

Based on region, North America accounted for around 27% of the market share in 2020. This can be attributed to various factors such as presence of developed healthcare infrastructure in the region, increased healthcare expenditure, increased awareness regarding neurological disorders, and growing geriatric population in the region. The presence of several top players in the region and various developmental strategies adopted by them significantly drives the market growth. 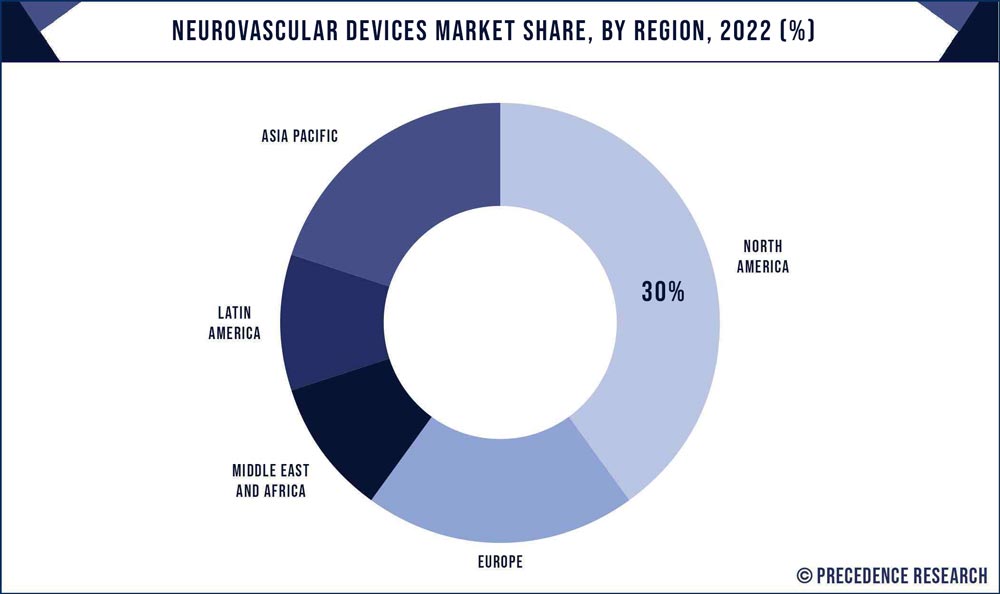 The Asia Pacific is estimated to be the most opportunistic market during the forecast period. Asia Pacific is characterized by huge population, rising expenditure on healthcare, and increasing disposable income is fostering the adoption of the neurovascular devices in the region. Further, the rising government expenditure for developing sophisticated healthcare infrastructure in the region is expected to drive the growth of the market in the upcoming future.

In August 2020, Stryker Corporation a flow diverter named Surpass Evolve Flow Diverter, in US after acquiring the FDA approval.

Some of the prominent players in the global neurovascular devices market include: