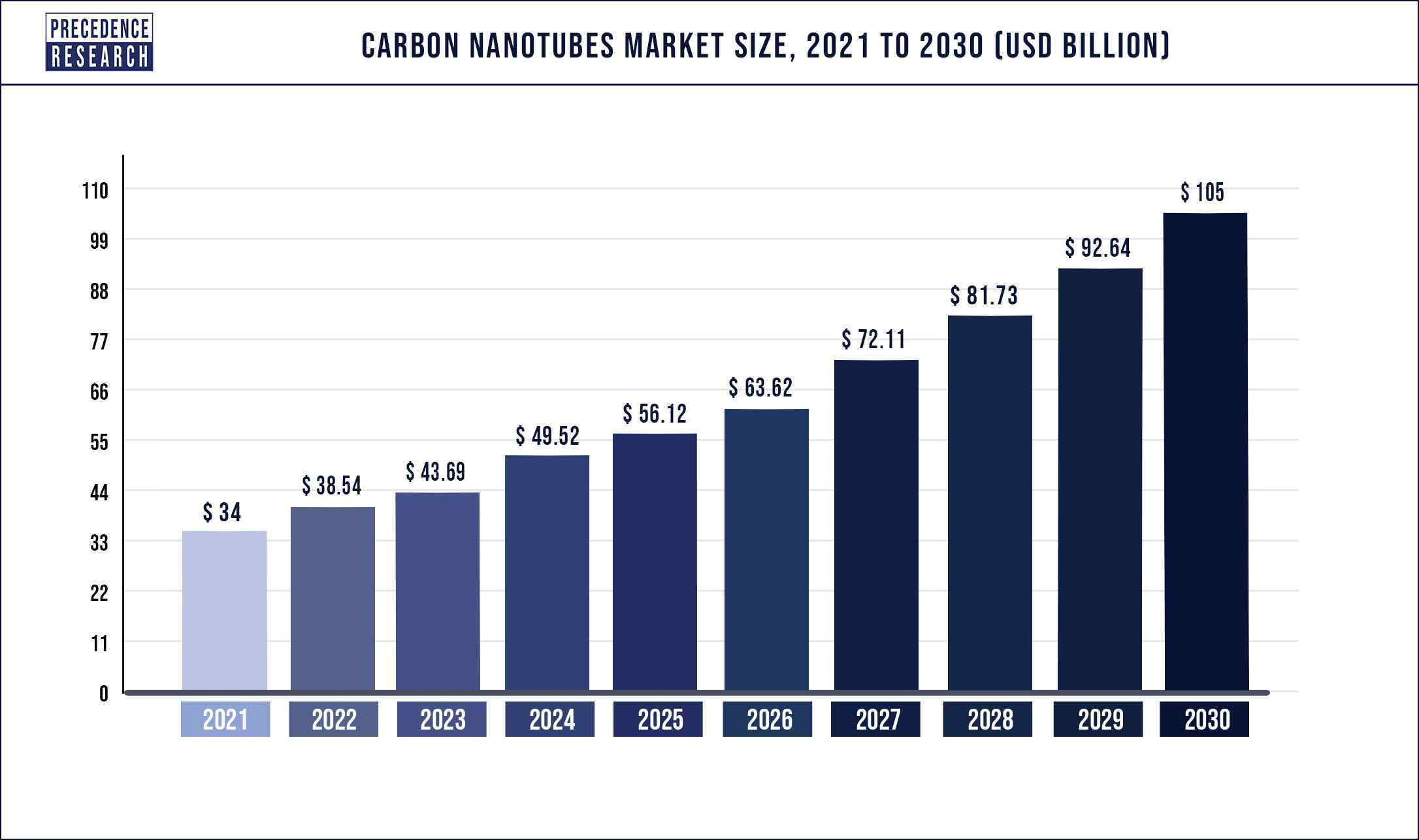 China and U.S. are major auto manufacturers and exporters of carbon nanotubes. China and the US what affected drastically due to the COVID-19 pandemic. Due to consequent lockdowns and other restrictions the supply chain and logistics were greatly affected. Most of the industries were temporarily shut down. Major supply chain disruptions were one of the most important factors that reduced the production capacity of carbon nanotubes. Many production plans were shut down during the pandemic. As there were restrictions on travel the logistics were also greatly affected. It was extremely difficult to move finished products from one place to another. Also acquiring the required raw materials was difficult during the pandemic.

On the basis of product type the Multi-Walled Carbon Nanotubes (MWCNTs) segment revenue is expected to register a significantly robust growth rate in the coming period. 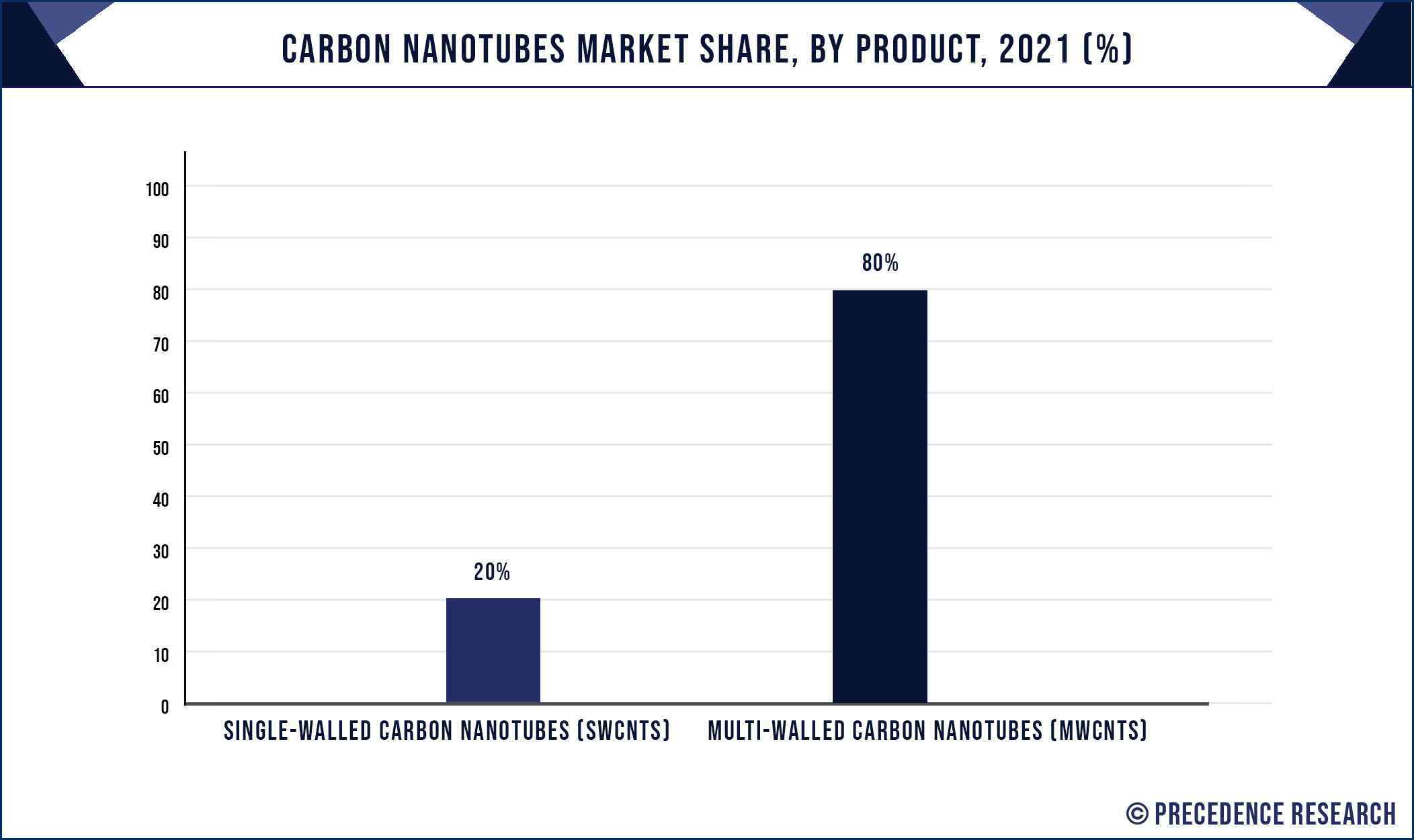 The Multi-Walled Carbon Nanotubes consist of multiple layers of concentric tubes developed with graphene, and they are a nanoscale additive that can be helpful in improving the mechanical properties, as well as electrical conductivity and thermal conductivity of products in which they are combined.

On the basis of technology the chemical vapor deposition segment will have the largest market share in the future. The use of this technology helps in having carbon nanotubes which are better in quality. The chemical vapor deposition segment is also very helpful introducing the temperature of carbon decomposition. It is an important factor in the manufacturing of the carbon nanotubes.

Electronics & semiconductor segment is also estimated to register a good growth rate in the forecast period, due to an increasing demand to meet the needs from the various manufacturing industry across the globe. Also, CNTs are extensively used in the fabrication process of the diodes which is done with the help of polymer coating process and it is estimated to increase the revenue growth of this segment during the forecasted period. In the medical and pharmacy industry carbon nanotubes happen to be of great help in the diagnosis of cancer and its treatment. Carbon nanotubes happen to be a great antioxidant. With the use of carbon nanotubes the drugs can be delivered to the affected cells or tissues. All of these reasons or extremely important for the growth of the medical and pharmacy segment.

Due to a growth in the automobile industry, construction industry, aerospace industry and electronics industry in specific nations like India, China, Japan and Malaysia in the Asia Pacific region will boost the market in the future. There is an increase in the manufacturing of electronic items in South Korea, Japan, China and Singapore and it is expected to help in the growth of the market. Increasing demand for circuit boards will increase the usage of this product. The consumer electronics market expected to grow in the Asia Pacific region and this will strengthen it's shared in the global market. India imported electronics worth U.S.$50 billion in the recent years. 5G smartphones worth 4 million and above were shipped. As there is a growing demand for carbon nanotubes in many end user industries there shall be a growth in the market 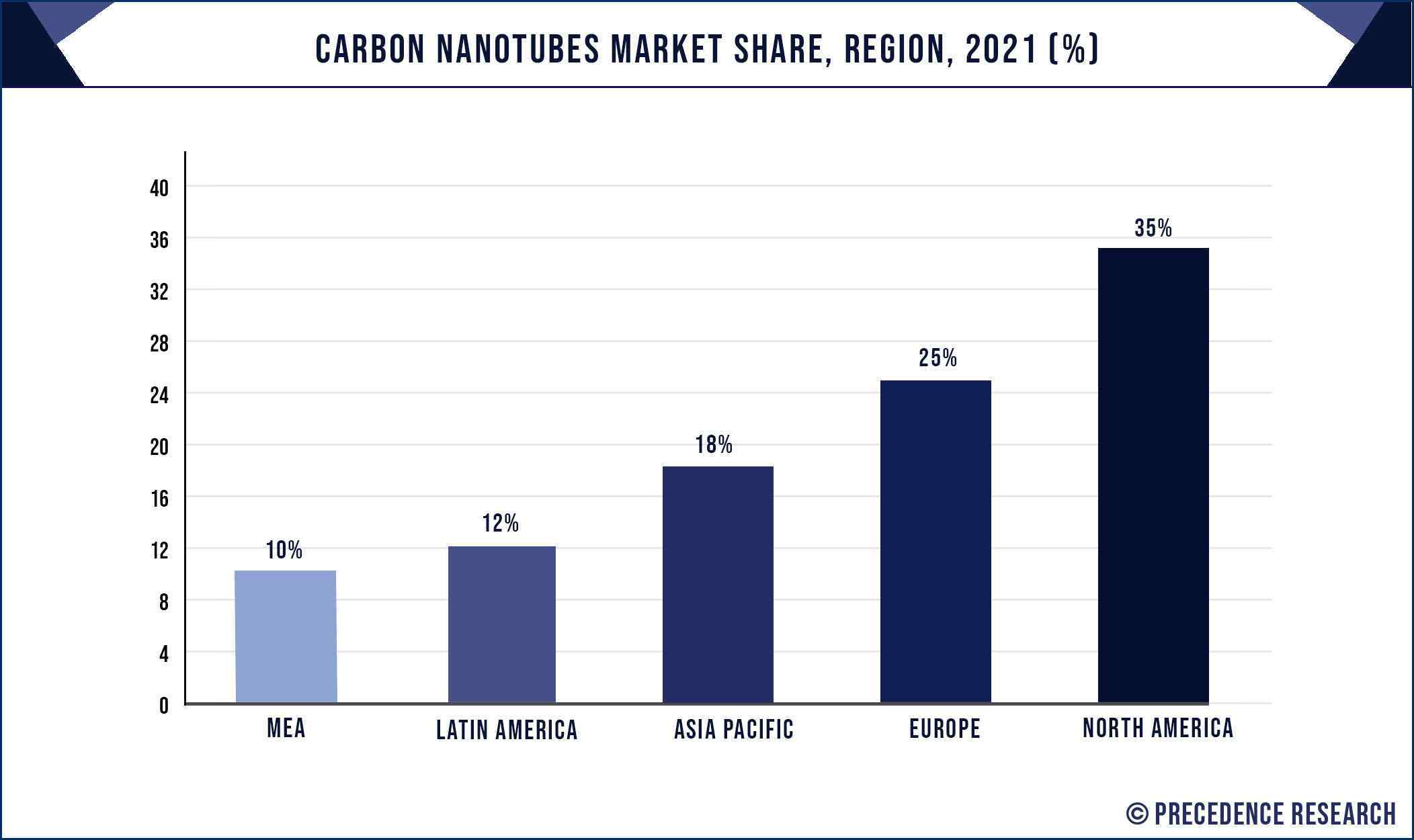 Developing nations in the Asia Pacific region are expected to drive the market during the forecast period. Nations like India China Japan and South Korea shall have the maximum market share during the forecast period. Low cost of Labor is one of the main reasons supporting the manufacturing of carbon nanomaterials in this region. Largely available raw materials in the Asia Pacific region we will drive the market growth. Asia Pacific region is seeing an increase in demand for electrical and electronics products. The automobile industries electronic industries instruction industries and the aerospace industries widely used carbon nanotubes in their manufacturing processes. The polymer industry is expected to have a good growth during the forecast period across many nations like Malaysia, Japan, India and China. Governments are investing on producing more and more solar cells which make use of carbon nanotubes. Increased production of the solar cells shall lead to the growth of the carbon nanotubes in this market.

Apart from the Asia Pacific region the North American region and the European region is expected to witness a significant growth rate in the future as many major manufacturers or located here as an increasing demand for manufacturing of polymers in the US market is expected to grow. In order to promote green energy, the governments in the European and North American region are imposing regulations which will help in the growth of the market. The second largest market for carbon nanotubes is the North American region. As many major market players in this industry are funding the research institutes in this region.

Professors from Rochester Institute of Technology (RIT) along with those of the University of Rochester Medical Center (URMC) were given the patent to send biomolecules into the cells through the use of carbon nanotubes. This technology will support inter-cell transfer of bio-therapies to the cells that are targeted and is developed by Ian Dickerson.

Arevo Developed an advanced technology which happens to be a breakthrough in 3D printing. 3D printing is used for objects which are reinforced with carbon nanotubes.

In the year 2021, IP Group Inc. and CoMotion launched nanotechnology startup Somalytics Inc., at the University of Washington. Paper carbon nanotubes capacitive sensor that is sensitive to the body along with being flexible is being developed by Somalytics. This will enable its use for industries and new consumers as the first miniature carbon nanotube. The company will be developing and producing it on a large scale. ChemSpec North America, a specialty chemical distribution organization, entered a non-exclusive distribution agreement in August 2020 with Nanocyl SA in order to promote and distribute carbon nanotube products in the United States and Canada.

LG Chem is aiming to meet the increasing demand of CNT by expanding its production output of carbon nanotubes (CNT) 1,200 ton at its Yeosu plant in South Korean region.