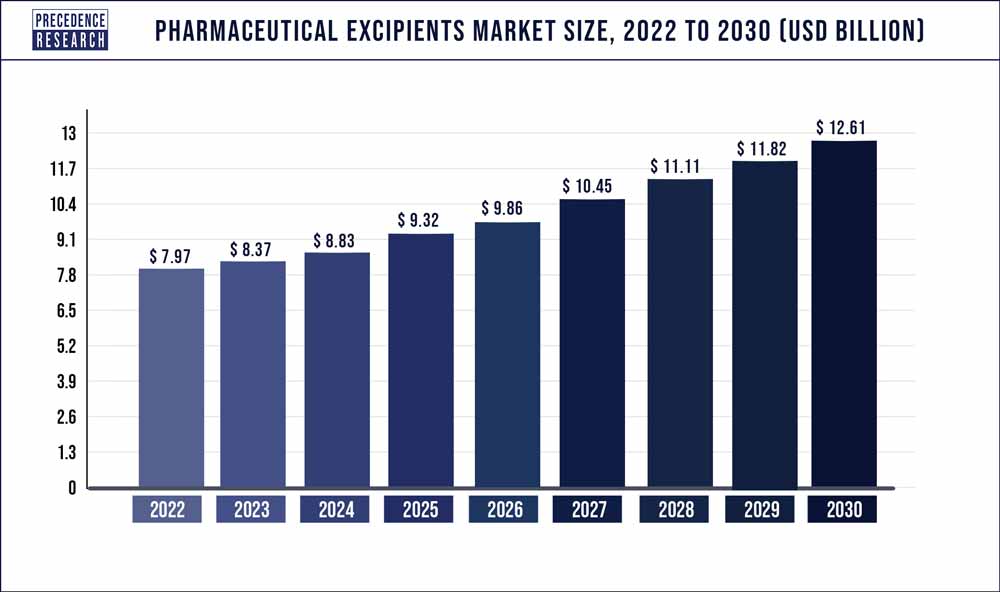 Pharmaceutical excipients are inert substances, other than pharmacologically active medicines that are included in the production process or are present in pharmaceutical product dosage format. Excipients are extensively used in the formulation of drugin order to add bulkiness to solid formulations, provide long-term stability, and facilitate drugs absorption. Additionally, it also improves the overall safety or functional attributes of the product during usage or storage.

The global pharmaceutical excipients market is propelled by the growing demand for oral pharmaceutical medicines and the augment of novel therapeutics owing to the proliferation in the number of pharmaceutical industries across the globe. Additionally, the amalgamation of medicine formulation as well as nanotechnology in excipients has led to the formulation of nano-derived liposomes, nano-coated tablets, and vaccines. Moreover, many key players are targeting the developing economies for the growth of their manufacturing plants for pharmaceutical excipients, glycerin, preservatives, and Fatty Acids owing to low cost labor availability. However, high production cost and stringent government regulations are expected to restrain the overall market growth in terms of value sales. Applications such as topical formulation, parenteral formulation, and oral formulation are driving in huge investments in the market. Moreover, the target consumers such as drug manufacturers, consulting firms, and pharmaceutical excipients manufacturers, research & development companies and others are likely to offer immense opportunities for the growth of market during the forecast period in terms of value sales. Furthermore, the   market growth is majorly driven by the growing demand from the pharmaceutical sectors due to the outbreak of Covid19 pandemic. Additionally, the rising use of generic drugs coupled with the development in the field of biopharmaceuticals is other factors which are supporting the market growth in terms of value sales.

However, the rising pressure owing tothe strict guidelines set by the regulatory authorities about the approval of drugs and excipients is likely to hamper the market growth. The easy availability of low-quality excipients has adversely affected the effectiveness of the medicines that creates a requirement for quality control.

Moreover, according to the key market players in the industry, over the last three years there has been a continuous rise in the demand for cheaper quality excipients from the developing economies such as Asia Pacific and East Africa regions. This is attributable to the rise in the requirement in the local drug manufacturing industry. However, the trend is the opposite of the situation currently in developed countries with sophisticated manufacturing practices, where demand for superior quality excipients is increasing, but at a lower rate than that in emerging economies.

By product, the market is segregated into organic chemicals, inorganic chemicals and others. In 2021, the organic chemicals segment accounted for the lion share in the market and is also expected to be the fastest growing segment during the forecast period. This is attributable to increasing usage of these chemicals in a majority of pharmaceutical formulations which in turn the driving the market growth in terms of value sales.

Based on the functionality, the pharmaceutical excipients market is divided into fillers & diluents, binders, suspending& viscosity agents, flavoring agents & sweeteners, coating agents, colorants, disintegrates, lubricants & glidants, preservatives, emulsifying agents, and other functionalities. In 2021, fillers & diluents hold the largest market share. This is because the demand for fillers and diluents is high among the end user industries as they are used in the formulation of capsules and tablets which are the most common type of formulations presently.

Depending on formulation, the pharmaceutical excipients market is segregated into topical, smart oral, parenteral, and other formulations. In the year 2021, the Oral formulations segment dominates the market due to their extensive usage and efficacy against much disease. During the Covid-19 health crisis, the healthcare professionals suggested antiviral drugs as the prime line of defense. The demand for these medicines was high during the pandemic owing to their efficacy to fight against disease such as the pneumonia and respiratory infections. Thus, as they are developed in tablet format for oral consumption, the demand for oral formulations is increasing which in turn is contributing towards the overall growth of the market in terms of value sales.

Europe accounted for the maximum share in the pharmaceutical excipients market in the year 2021 and is expected to retain its dominance throughout the forecast period. Many European countries are focusing on the generics market owing to the expiration of the medicines patents in the upcoming years. Thus, due to this, the European countries such as Germany, UK, France and others are expected to witness significant growth rate during the forecast period which in turn is likely to drive the demand for pharmaceutical excipients in this region. Additionally, the growing government initiatives for reducing the prices of the drugs in the market are anticipated to drive the market for generic drugs in these countries. The aforementioned factors, along with the rising investments for the development of biologics as well as advanced dosage forms, are likely to increase the demand for new excipients and thereby contributing in the growth of the pharmaceutical excipients market in Europe. 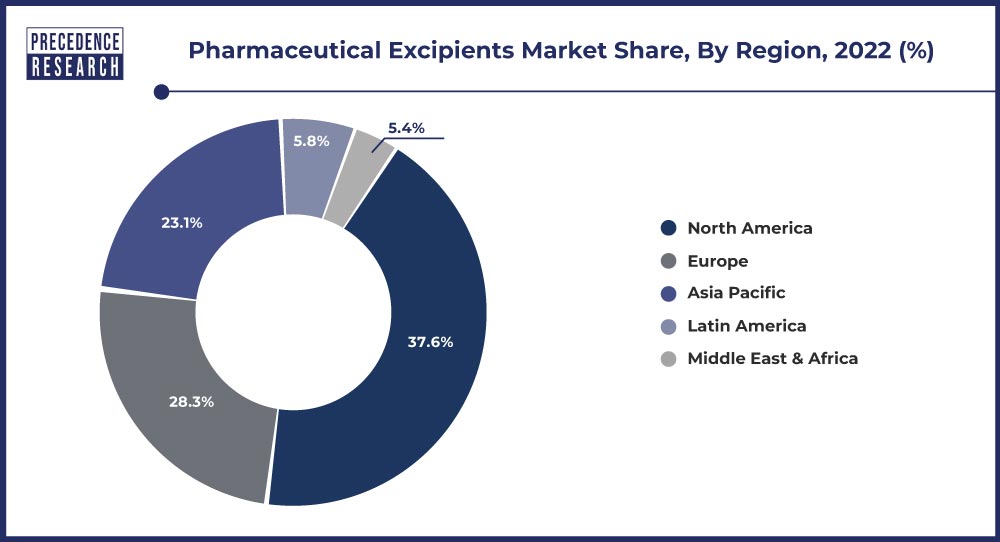 The North America market is also expected to witness a significant growth rate during the forecast period, owing to growing demand for solid oral drugs for the treatment of chronic diseases. However, the Asia-Pacific region is expected to register the highest CAGR, owing to low cost of raw materials and availability of cost-effective workforce.

Some of the prominent players in the global pharmaceutical excipients market include: