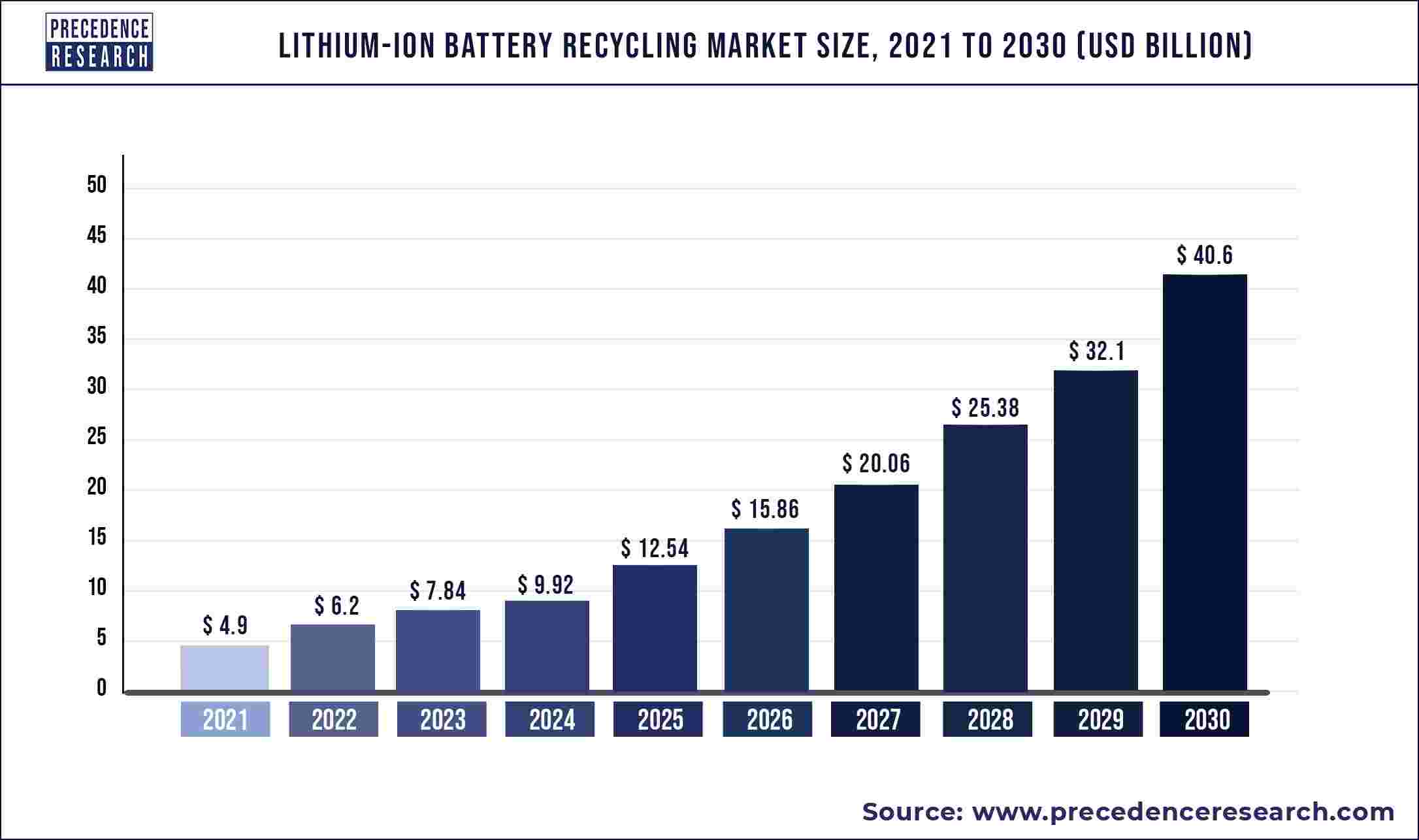 Lithium-ion battery regeneration refers to the gathering of lithium-ion batteries from a variety of sources, such as automobiles, consumer goods, industrial equipment, and electronic devices, as well as the extraction of metal using recycling procedures. The world market estimate includes income from sales of such reclaimed elements or components, regardless of whether they are used in additional battery recovery and other uses that necessitate a secondary use. It is said that the majority of elements retrieved are simply used to make batteries.

The worldwide lithium-ion recycling market is anticipated to expand as a result of variables including governmental laws, environmental protection, and increasing understanding. Furthermore, inappropriate lithium-ion battery recycling global growth is anticipated to be hampered during the forecast timeframe by incorrect separating of hazardous lithium batteries, incorrect disassembly, and inappropriate shredding. The availability of coating materials to decrease the likelihood of flame as well as the beautiful appearance of cells are predicted to open up new development potential in the global marketplace.

One of the main drivers driving the industry of lithium-ion recycling is the huge requirement of electrical automobiles all over the world, together with subsidies offered by governments of different nations for rechargeable batteries. Due to worries about the ecological damage caused by automobiles running on traditional sources of energy like gasoline and diesel, there has been a considerable increase in electric vehicle demand.

One of the key drivers is the declining price of batteries used in electric vehicles. The resource recovery business is predicted to increase quickly thanks to the transport industry. Because of its highly efficient, extended lifespan, and low care requirements, lithium-ion batteries are becoming increasingly popular in portable electronics and electric cars, which is projected toward a beneficial effect on the market for sustainable packaging. Since the market is valuation, development throughout the projection period is anticipated to be constrained. Given that the majority of refiners employ essentially the same technologies, the cost is becoming a crucial distinguishing feature.

The usage of renewable biofuels is becoming more prevalent in the automotive sector. The transport network is heavily dependent on oil as a resource, which is raising worries among economics and the environment alike. The use of electric cars is growing along with ecological sustainability. EDVs are being used more frequently, which is causing an increase in the demand for fuel cells, that are necessary for a constant energy supply. The industry for EVs is anticipated to expand as a result of variables like fuel efficiency, reduced emissions, and customer choice. Due to better battery tech as well as the minimal downtime needs of these fuel cells, the electric vehicle market is rising.

By constructing new recycling facilities and collecting sites, businesses are trying to boost their level of competition. New techniques are being forced to cut expenses and stop environmental pollution. To collect the purpose of collecting used batteries, ECOBAT has created its collection mechanism. New techniques are also being explored to cut expenses and stop environmental contamination.

The escalating trend for personal electronics and lithium-ion batteries

The recycling business is predicted to increase quickly thanks to the transportation sector. Because of their highly efficient, extended lifespan, and low care requirements, fuel cells are becoming increasingly popular in portable electronics and electric cars, which is anticipated to have a beneficial effect on the market for goods produced.

Rising acceptance in novel applications, a drop in lithium-ion battery pricing, and recycling at the final moment are all anticipated outcomes of increased production

Modern lithium-ion batteries are made up of several parts that are offered at discounted prices. The costs of these cells are anticipated to significantly fall, according to recent advances and statements made by automakers and manufacturers of lithium-ion batteries. Costs are dropping as a result of innovations including mass production, decreasing unit cost, and the use of technologies to increase storage capacity. The industry for storage of renewable energies is predicted to expand as a result of falling lithium battery prices, and this industry is predicted to favor battery cells above all other rechargeables. The need for recovering used lithium-based batteries is then anticipated to rise as a result.

An increasing number of government recycling programs and R&D projects 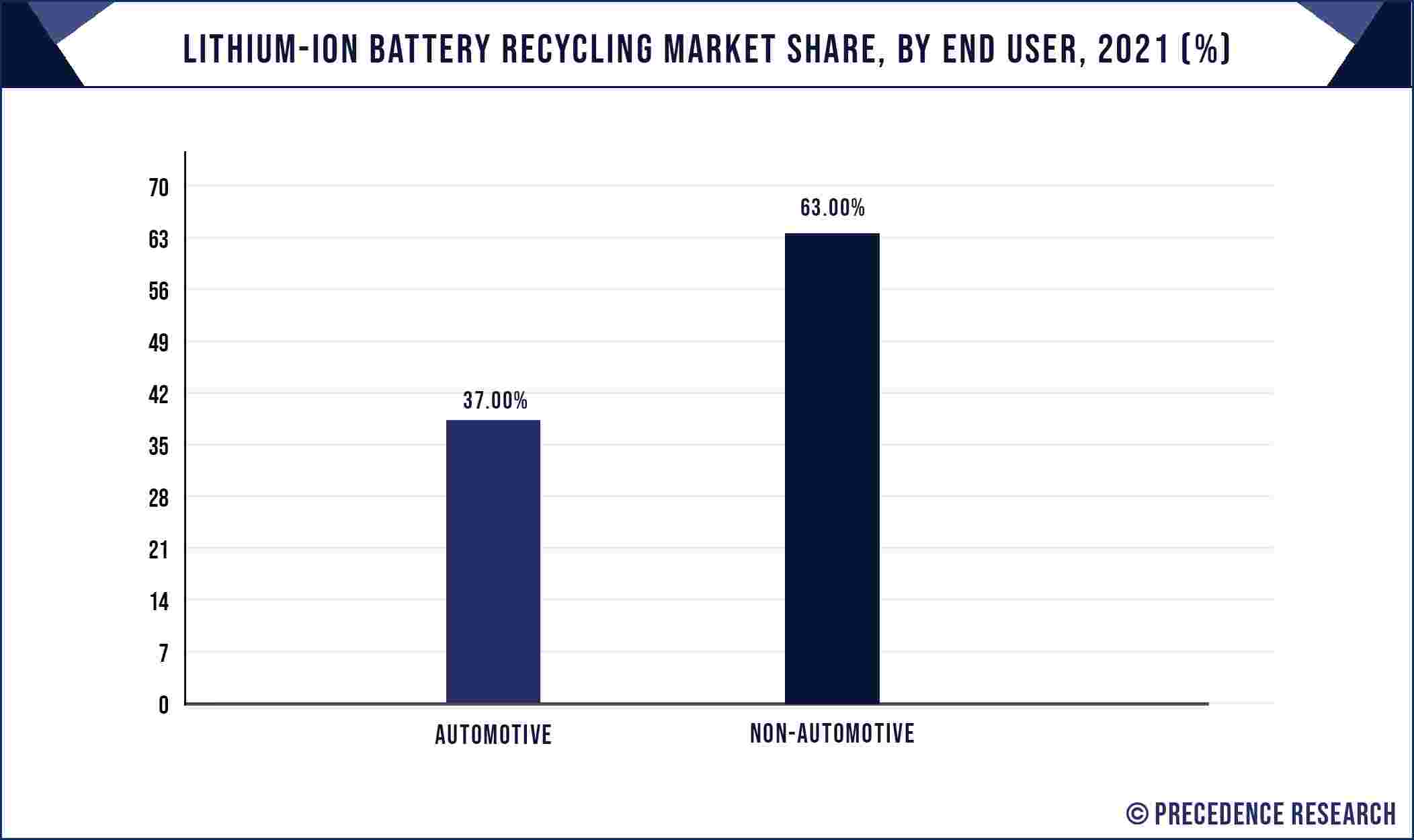 Also, regulations and subsidies related to battery recycling by countries such as China and Germany have fuelled the market growth for lithium-ion battery recycling. This stays accredited to the rise in demand for second-life applications of lithium-ion batteries in consumer electronics devices such as laptops, digital cameras, smartphones, and others that do not require longer battery life as compared to electric vehicles and industrial applications.

Due to its expanding use in energy storage technologies and the automobile industries in e-bikes or other e - mobility, the lithium-nickel Mn cobalt segment dominated the greatest proportion of the battery pack recycling industry. (Li-NMC) cells are in high demand due to their low cost, high efficiency, & extended life span. Due to the increased demand for battery oxides batteries for uses such as electric, gasoline, smart meters, flame and smoke detectors, security equipment, or other power storage technologies, the lithium-manganese oxide sector had the biggest market share in 2021. Additionally, it has benefits including lengthy dependability, a long life, and a high temp handling capacity, all of which are predicted to support market expansion throughout the projected timeframe.

In 2021, the hydrometallurgical procedure segment held the largest market position. This is ascribed to the benefits of hydrometallurgical recovery and recycling over other cell recycling technologies, like its capacity to handle low-grade components, regulate trash easily, use less power, and recycle aluminum and lithium.