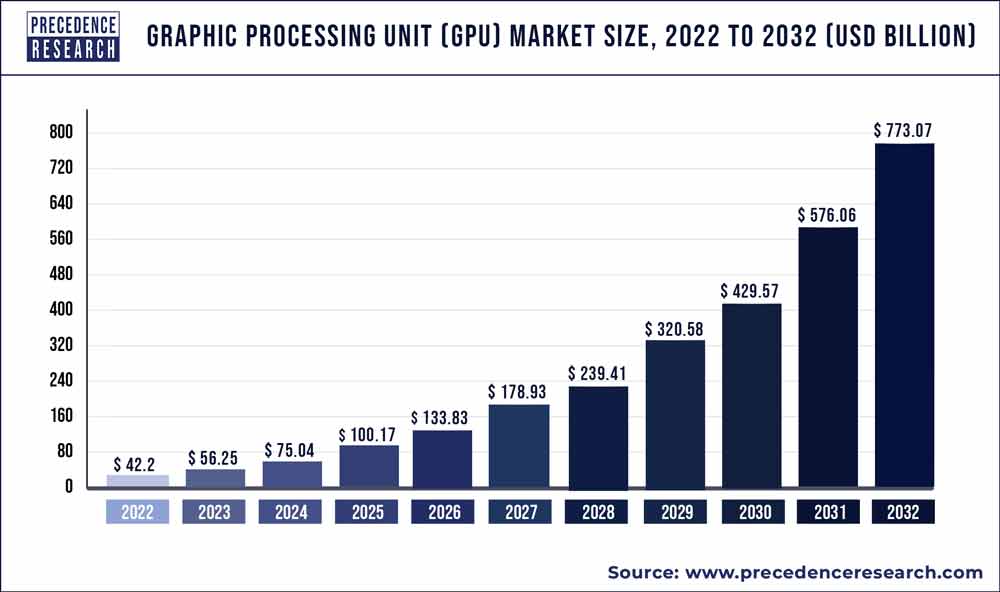 Factors such as continuous advancements in graphic-based games, trending Artificial Intelligence (AI), traction in Virtual Reality (VR) & Augmented Reality (AR), and increasing adoption of gaming laptops together with computers expected to propel the graphics processing unit market growth. In addition, thriving wearable and portable electronics market along with rising popularity of Internet of Things (IoT) predicted to accelerate the growth of the graphics processing unit market during the upcoming years.

Achieving augmented reality along with producing a convincing user experience is now feasible due to significant improvements in the graphics technology coupled with related technology developments in consumer electronics and smart phones. Numerous GPU manufacturing companies are engaged in the development of VR solutions that expected to basically redefine the computing experience. Furthermore, companies are prominently developing advanced GPU systems for VR and AR, thereby attracting the computer and film industries, consumers, and developers. Increasing integration of VR and AR in different applications projected to propel the adoption of graphic processing units.

On the other side, inability of integrated GPU to assist intensive graphic designing software projected to restrict the growth of the graphics processing unit market during forecast period.

The smartphone devices emerged as the dominating segment in the global GPU market for the year 2019 and expected to maintain the same trend over the forecast period. The growth of the segment is attributed to the significant demand of durable as well as less power consuming GPU that foster the growth of integrated GPUs in the smartphone segment. In addition, smartphone manufacturers develop products that support AR and VR that projected to offer significant opportunity for the smartphone GPU market. Moreover, increasing adoption of smartphones for gaming purpose has surged the demand for high-end computing systems that can serve graphics-intensive gaming applications.

On the other hand, the other segment anticipated to witness the highest growth rate during upcoming years because of rising demand for small sized and efficient GPUs in other devices for example medical equipment that can potentially spur the graphic computing quality and speed.

The integrated segment led the GPU market by type with prominent value share in 2019 and expected to retain its position during the forthcoming years because integrated GPUs find wide application in portable electronic devices that include tablets, smartphones, laptops, wearable’s, and many others. In addition, the market witness significant research activities dedicated towards the development of integrated GPUs that are capable enough to aid high graphic processing in supercomputers, AI platforms, and VR systems.

Besides this, hybrid GPUs predicted to register the highest growth over the analysis period as hybrid processors have capabilities of both dedicated and integrated GPU that makes them a preferred choice for the software developers to improve the efficiency of graphics-intensive applications.

The Asia-Pacific dominated the global graphics processing unit market in the year 2019 and projected to retain its dominant position during the forecast period. The growth of the region is attributed to the significant investment from the government to generate high graphic computing systems used for defense & intelligence coupled with the rising incorporation of IoT systems that demand efficient graphic computing systems. Furthermore, rising penetration of internet and smartphones in the region accounted as the other most important factors escalating the demand for graphic processing units over the forecast timeframe.

On the other hand, Rest of the world anticipated to witnesses the highest growth rate in the upcoming years because of various factors that include rise in disposable income, increasing purchasing capability of consumers, and rise in demand for smart watches and smart TV in the region drives the growth of the market. Furthermore, Latin America and Middle East & Africa offer lucrative opportunities for establishing new network communication that triggers the investment in the internet and smartphone market in the region. 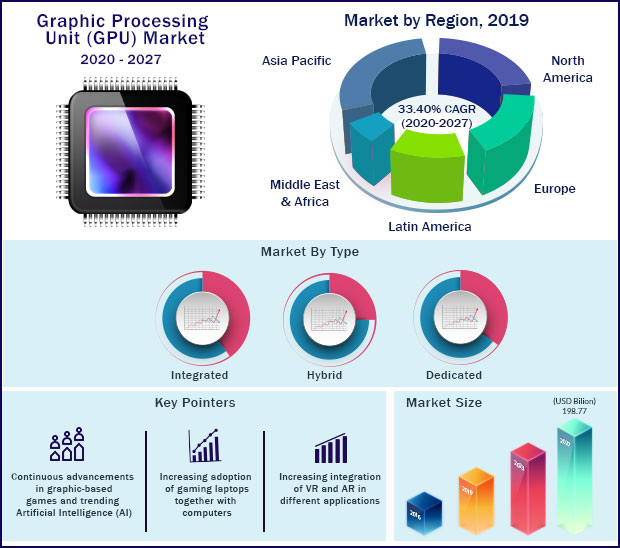 Some of the prominent players in the Graphic Processing Unit (GPU) market include:

This research study comprises complete assessment of the market by means of far-reaching qualitative and quantitative perceptions, and predictions regarding the market. This report delivers classification of marketplace into impending and niche sectors. Further, this research study calculates market size and its development drift at global, regional, and country from 2016 to 2027. This report contains market breakdown and its revenue estimation by classifying it based on device, type, industry vertical, and region: